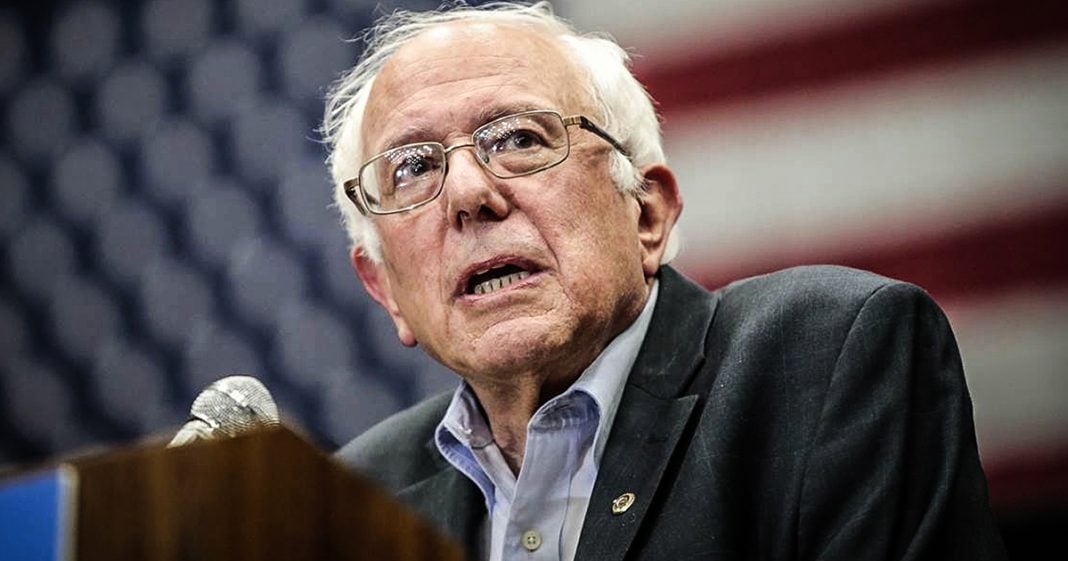 Senators like Joe Manchin and Chuck Schumer are terrified that they could face the same kind of backlash that Republicans are facing during meetings with their constituents, so they’ve devised a plan to avoid it: They’ll just ask Bernie Sanders to tell people not to protest.  Good luck with that. Ring of Fire’s Farron Cousins discusses this.

Democrats have seen the troubles that Republicans are facing anytime they go back to their constituents and host a town hall. They’re being met with angry protesters standing up against things like repealing the Affordable Care Act, or trying to cut social security. Well, as it turns out, the Democratic Party itself is in not much better shape than the Republicans, and we have plenty of Democrats who are willing to side with corporations over people every single chance they get, and so that’s why in a meeting earlier this week, Democrats got together to try to figure out how they can avoid the same situations that Republicans are facing during meetings with their constituents, and here’s the brilliant plan that they came up with. “Let’s have Bernie Sanders tell people to not protest us.”

That is exactly what Democrats, including Joe Manchin and Senate minority leader Chuck Schumer came up with in order to avoid angry protesters during meetings with constituents. “Let’s have Bernie Sanders tell them not to protest us.” Now, here’s the thing. According to Simon Maloy at Salon.com, this is no different than when Republicans say that the protesters are paid. If you think you can buy people off essentially by having Bernie Sanders tell them not to protest you, then you’re giving them as much legitimacy as the people who call them paid protesters, and that is essentially none.

The reason people like Bernie Sanders is not because he’s Bernie Sanders. They like him because they agree with what he says. They agree with his policies, they think that he is tackling the important issues that other politicians need to be paying attention to, and when you take somebody like Joe Manchin from West Virginia, a man who consistently votes against the environment in favor of the coal industry over workers, that’s not a man whose constituents or what have you, or Democrats will rally behind, simply because Bernie Sanders says to. To be honest, I don’t think that Bernie Sanders is the kind of guy who would be willing to go out there and go to bat for somebody who consistently votes in favor of corporations, because that goes against everything Bernie Sanders has stood for his entire career.

It’s about taking care of people. If you want to get the Bernie Sanders crowd on your side, maybe you need to stop pulling in all that corporate money, maybe you need to stop paying more attention to fundraisers than you do to the voters. Maybe you need to focus on things like income inequality, protecting the environment from climate change, and making sure that people have health insurance and that they can afford to purchase medication. Those are the things that Bernie Sanders talks about and that’s why people gravitate towards him. It’s not because his name is Bernie Sanders. It’s because he’s out there actually saying the things that people agree with, he’s fighting for the policies that the American public wants, and that’s why they like him.

If it were anybody else pitching these policies, they’d be gravitating towards that person. Why can’t the Democratic Party learn that lesson? Why can’t they look at what Bernie Sanders does and see the support that he gets and say, “You know what? I’m going to emulate that. I’m going to stop taking corporate money. I’m going to start meeting with constituents, finding out their concerns, and addressing them in the Senate and the House of Representatives.” But no, the Democratic Party won’t do that. They want to take the easy way out. They want to have Bernie Sanders come in and save the day and say, “Well, these guys aren’t that bad.” Well, you know what? He’s not going to do that because these guys are that bad.

Joe Manchin is one of the worst sitting US senators. I mean, Inhofe and Cruz on the Republican side, pretty bad, but Joe Manchin right there underneath them because he claims to be a Democrat and acts like the most corporatist Republican you could imagine. Bernie Sanders isn’t going to come to your defense, he’s not going to come and save you, and more importantly, even if he did, that’s not enough to convince the voters that the Democratic Party actually cares about them. What you need to do is work on yourself, work on your policies, work on your fundraising, start getting more from people and less from corporations. That’s how you emulate the Bernie Sanders model.