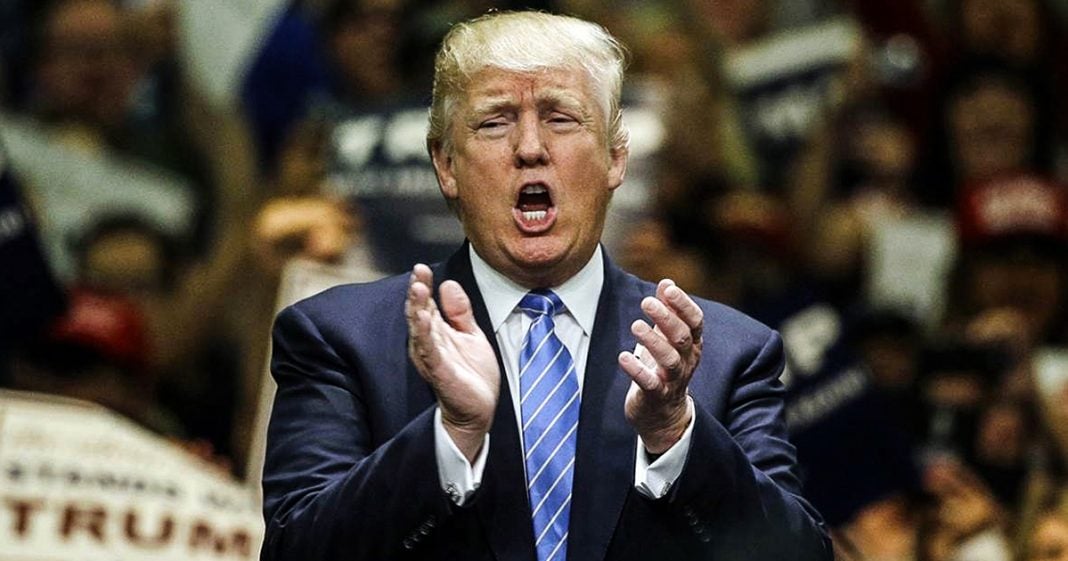 Donald Trump, the man who campaigned on a promise to “build a wall” and complained nonstop about immigrants taking American jobs, actually got special permission from the Labor Department to hire 64 foreign guest workers at his Mar-A-Lago resort during the busy winter season, when Trump was hosting meetings and events at the resort. Ring of Fire’s Farron Cousins discusses this.

Donald Trump campaigned on the promise to build a wall between the United States and Mexico because we had to keep out those Mexican immigrants because they were coming over to the United States and taking the jobs from good, hardworking, American, middle-class workers. Those Mexican immigrants were taking your jobs. That is something that Donald Trump told us on the campaign trail. Maybe not in those exact words, but he did say that the immigrants were taking the jobs from Americans and he was going to put a stop to it, put American citizens back to work.

I suppose that’s why back in December, during the busy season at his Mar-a-Lago resort, Trump got special permission from the US Department of Labor to hire 64 foreign guest workers to take care of the guests at his resort. Now, those 64 jobs very easily could have gone to American citizens. There are plenty of people in South Florida who could have had those jobs. And, again, none of these workers were illegal. They were all guest workers here on working visas.

But that’s not the point. The point here is the hypocrisy. Donald Trump, as we’ve seen now with Mar-a-Lago and his other product lines, takes full advantage of immigrant labor, of overseas cheap labor. He doesn’t give a damn about American workers. That should be obvious to everyone at this point, and yet it’s not. I mean, the people in the Rust Belt, who voted for Donald Trump and gave him this election electorally, are the ones who got screwed here. They bought into his lies that he was going to bring back American jobs, that he was going to make America great again, that he was going to stop the immigrants from taking our jobs. And then literally, before he’s even sworn in after the election, he opts to hire foreign workers instead of American workers.

That’s not somebody who’s friendly to the middle-class of America. That’s not somebody who keeps his campaign promises. That’s a man who knows only one thing, and that’s the bottom line of his industry. He can pay these workers less than he could American workers, so he gets to keep more money. He used his new found political position to get a special permit from the US Department of Labor to do this. That put more money in his pocket and he used his office as President-elect to get it done. That is a very direct, very illegal conflict of interest. It’s just one of the many that we have seen from the Donald Trump administration.

This man is constantly breaking the law. And it’s not even something that we would have to have massive investigations to prove. Here it is, folks. Getting special permission from the US Department of Labor, because you’re the President-elect, to hire foreign workers so you can pay them less and pocket more money at your resort, is illegal. That is a conflict of interest. Donald Trump is using the Office of the Presidency to make more money.

Why are people not pissed off? Why are those Rust Belt Republicans not pissed off about this? 64 jobs isn’t that many. But to the people in South Florida near Mar-a-Lago, I’m sure you could find 64 unemployed people with families who desperately need those jobs. And I understand that those guest workers also need those jobs. This is not a knock on them. They did nothing wrong. Donald Trump is the hypocrite here. Because if he wants to get serious about saving American jobs and creating jobs for American citizens, then he needs to start with his own businesses.