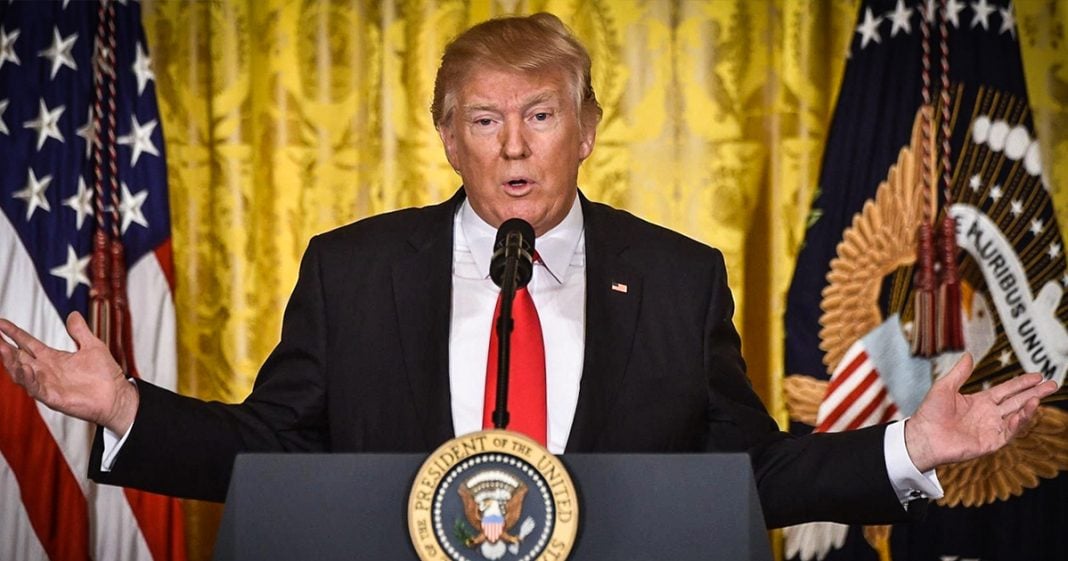 On Thursday, Donald Trump decided to address the American public directly during a 77-minute press conference. He attacked the media, belittled an African American reporter, and managed to get in a few shots at Obama all while insisting that his administration is running like a “fine-tuned machine.”  Someone needs to tell the emperor that he’s not wearing any clothes. Ring of Fire’s Farron Cousins discusses this.

Yesterday, the media was buzzing about Donald Trump’s crazy press conference that he, for some reason, decided to give. He went on for 77 minutes, the entire time talking about complete nonsense. Anyone who watched this press conference, or anyone who even read the transcripts, or read stories about what happened, understands that this man is unfit mentally to be the President of the United States, to be the leader of the, so-called, free world.

I’ll give you the straight dope on what’s happening. He’s pandering to the American public, once again, by creating an enemy. The enemy is the media. The enemy are the intelligence agency’s leaking the information showing that his campaign and his staff have had, potentially, illegal communications with foreign countries.

But not according to Trump. According to Donald Trump, in this press conference, his administration is running like a fine-tuned machine. “Everything’s perfect. Don’t listen to the media, listen to me.” His supporters are going to buy that. This is psychological manipulation 101. This is straight out of the playbook of Hitler and Mussolini. This is what they did. You attack the media. You tell the people that they’re smarter than the media, and you buy their support by pandering to them and manipulating them. That’s what Donald Trump did with this press conference.

Later on in the press conference, April Ryan, a reporter with the American Urban News Network, asked a question about Donald Trump, whether or not he would meet with the Congressional Black Caucus. April Ryan, herself, a black woman. Donald Trump’s response was, “Can you set up a meeting with them?” Because, according to Donald Trump, if you’re a black person in the United States, obviously, you know all of the other black people in the United States. Maybe Trump assumes that, maybe, they all get together once a month for some kind of meeting, or at least a conference call. So, yeah, a black person would easily be able to set that up.

Ironic here, though, is that the Congressional Black Caucus had, in fact, invited Trump to come meet with them on January 19, the day before Donald Trump was sworn in. He never responded to them. Now, according to White House officials and the Congressional Black Caucus, they’re actually working now to try to set up some kind of meeting, because Trump got called out and, you know, he understands that the public isn’t too happy about that.

The rest of this press conference was nothing but ranting and raving. The ravings of a madman. Think about this, if you were walking down the street, and there was a guy on the corner, maybe even well dressed, in a suit, if he was shouting the same things that Donald Trump was shouting during this press conference, if he was just reading Donald Trump’s transcript word for word, you would probably cross the street to get away from this nut, but we can’t do that. This is our president.

He completely covered up the whole issue with Michael Flynn being forced to resign because he has been so incompetent, such a disgrace, and, you know, potentially committed treason. Covered that up, said, “No big deal, it’s the press. It’s the press. It’s the media, the fake news. They’re the ones creating the problem, not my incompetence, or my guy’s incompetence. It’s this stupid media. They’re the enemy, blame them, go after them.” That’s not going to continue to work.

Look, I have no respect for the corporate media whatsoever. Don’t get me wrong on that. They are awful, but in this instance, nobody has proven their story’s false yet. Nobody has been able to conclusively say that these stories are not true. We do, however, have proof that what Donald Trump has said is not true. You can trust whoever you want on these issues, but for right now, until other proof is available, I’m going to go with the corporate media.

Donald Trump has proven that he is a guy you cannot take at your word. He’s a guy that likes to insult people. During the press conference, a Hasidic reporter asked him a question. Donald Trump’s response, “Be quiet. Sit down.” That’s the President of the United States folks. He has no respect for anyone else in this country, probably not even for his own family. He cares about himself. He loves himself, and he wants everybody to love him too, but he’s not going to extend that effort.

The only thing he’s going to do is play on our own psychological fears, the fears of his supporters, which is the fact that the media lies. The media can’t be trusted. Those people are going to continue to support him. But it takes a special kind of stupid to take Donald Trump’s words at face value.