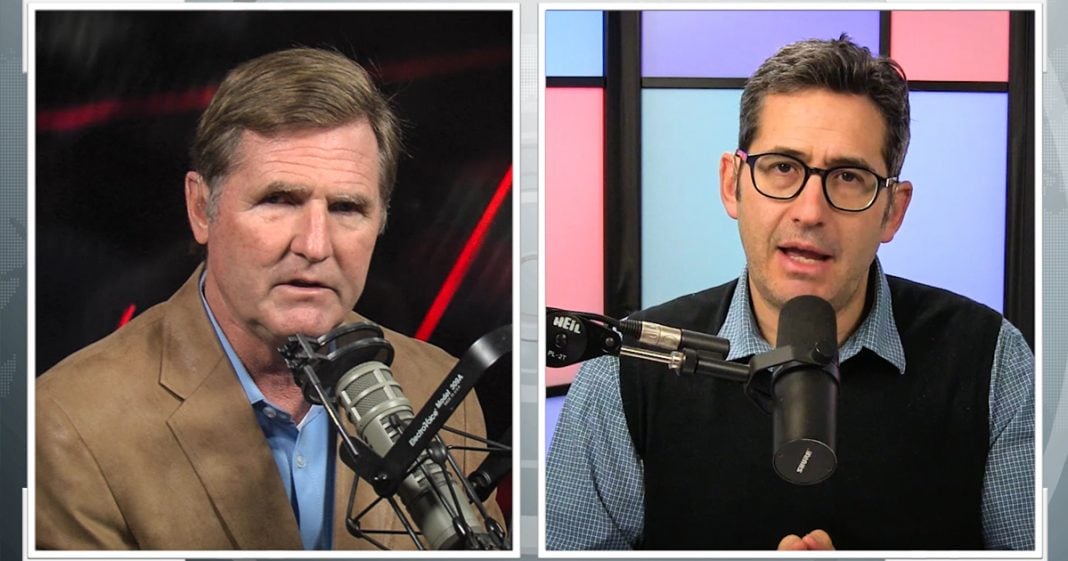 Ring of Fire’s Mike Papantonio & Sam Seder talk about the latest legal settlement with DuPont for the poisoning of citizens by dumping C8 into the Ohio River that ended up in people’s drinking water.

Sam: Pap, before we start talking about the topic that we had wanted to touch on I just wanted to get an update because I know that this is … Well, we’ve come to I guess the end of the road on this incredible case that you have been trying over the past now, it feels like two years.

Sam: Involving C8, just remind people what C8 was, who’s making it and what the resolution has been, because this is stunning.

Pap: Right, right. C8 is a product that manufacturers use to make Teflon. They have to have C8, they said that they had to have C8, they really didn’t. They argued they had to have C8 to actually manufacture Teflon. The problem was after they got done using the C8 rather than doing what they were supposed to it, which is of course incinerate it, they dumped it into the Ohio River, and many other places throughout the country, but they in this situation dumped it in the Ohio River and it ended up in people’s drinking water.

This case settled this week actually for $670 million and then $50 million a year for five years after that for claimants that might be coming that aren’t sick yet, that may become ill in the future. It’s an important settlement. There’s no question that DuPont understood that this had to be resolved. I think probably the only reason it wasn’t resolved is I think they were maybe getting some advice from their defense, corporate defense lawyers, that they were going to win and everything was going to be okay.

After trial number four they understood that that was not true. It’s a good day for the people in the Ohio Valley. There’s going to be other people that in the future become ill and DuPont anticipated that and built in addition to $670 million they put another $50 million for the next five years coming along the Ohio Valley.

Sam: Let me ask you this, in a case like this, is the Ohio Valley the only place that is impacted? If not, is it possible we could see other cases not just emanating out of this one incident but in other areas.

Pap: Yeah, for sure. Yeah, we’re already getting calls throughout the country. I haven’t been involved with any other cases but for DuPont, DuPont was really only one of the manufacturer. There’s other manufacturers as well that used the C8 that had every reason to know that the C8 posed a critically large danger to people that came in contact with it. All they had to do is do a little bit of due diligence and they would have known that. Yeah these cases, there’s not a lot of them but there’ll be other cases throughout the country.

Sam: What of DuPont’s basically attempt to spin off the division that made this stuff to merge with Dow? I’ve read a lot of different things that suggest maybe DuPont’s not even going to exist.

Pap: Right. That was the good thing. At the end of the day DuPont wanted to settle this earlier, I really do believe that. They had another company called Chemours that apparently was resistant to that, but that was the spin off company that made the C8. That was part of the problem, but they did have this spin off company called Chemours, and trying to get everybody to the table to get it resolved took a while, but I think everybody came to their senses and said, ‘These people need to be compensated for what they’ve been through.’

Sam: Moving into this question of opioids, before we get there, this dynamic it seems to me, where a large corporation engages in activity that they know, they have reason to believe or they know for sure, is detrimental to the health of consumers or detrimental to the health of the people who live in the community around them, they’re externalizing these costs. They’re placing them on people who either buy the product and use the product, or don’t even buy the product just live around where the product is manufactured, or live downstream from wherever it is.

Sam: What is the calculation that they’re making here? Because I think we’re normal people Pap, it’s really hard for us to look at this and say, ‘How could an executive actually make this decision?’ How could they simply say, ‘Well, we’re going to save money here and … ‘

Sam: ‘But we’re going to make 10 times that money that we may have to pay out.’ How can they make that decision?

Pap: Here’s the quick answer. The quick answer is, most of the time in these stories, I don’t care whether this is a pharmaceutical story or environmental story, this is a great example. It was only a very few people at DuPont that made this decision. I think it’s wrong headed to say, DuPont is a company that the average person out there working for DuPont had any sense of what was happening here.’ But the truth is, there were a few people that made the decision.

That’s what we see all the time. You see these companies that, they go out of business not because most of the company was involved in decision making, but a few people were. I think it’s that what ends up happening is, that is very difficult to overcome, when you have five or six people making a decision that affects tens of thousands of people, and it adversely affects them and people die and people become crippled because of those decisions.

Unfortunately everybody on board has to suffer through that. Even though you’ve got a company that for the most part the average worker out there for DuPont, they were there. They were working everyday, trying to make a living. They didn’t make these decisions. We have to start really focusing on who does make these decisions, and then there has to be more attention to where you can’t hide behind the fact that you’re a corporation and say, ‘Gee, we can’t figure that out.’ They can always figure it out. I can figure out in this case exactly who was responsible, exactly who was responsible. I could name them. But you can’t hold the entire company responsible, and that’s unfortunate because that’s what ends up happening, even though most times it’s only very few people.