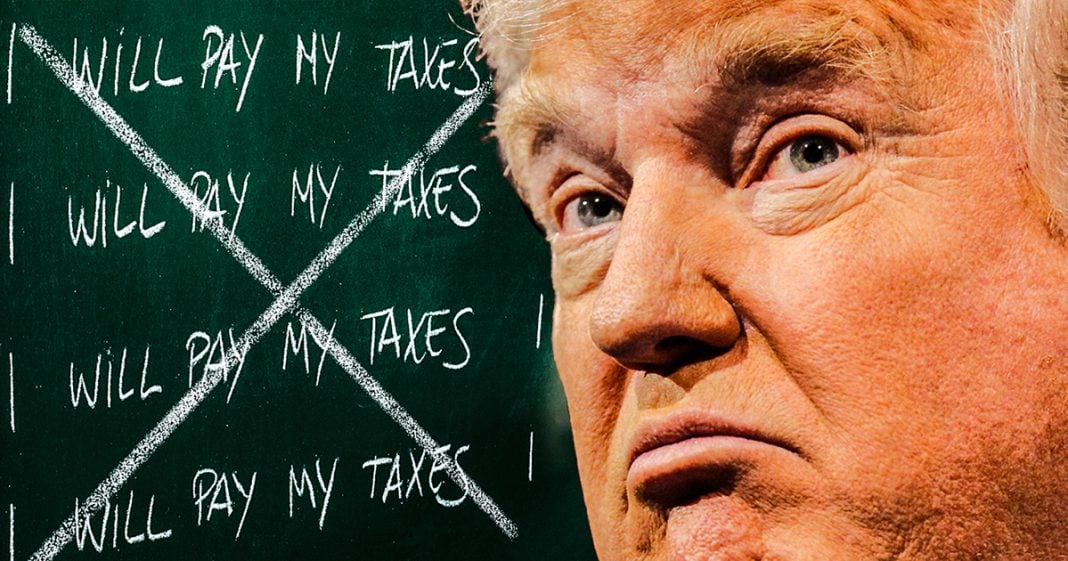 This week, Democrats on the House Ways and Means Committee attempted to invoke a nearly 100-year old law that would have forced Donald Trump to turn over his tax returns to check for potential conflicts of interest. But Republicans on the Committee understood how damaging that could be, and they derailed the effort, effectively shielding Trump from any scrutiny. Ring of Fire’s Farron Cousins discusses this.

Earlier this week, 23 Republicans on the House Ways and Means Committee turned down the opportunity to get their hands on Donald Trump’s tax returns. Under a 1924 law, any House committee that is involved with tax policy is allowed, if they invoke this law, to get their hands on the President’s tax returns to check out any potential conflicts of interest. It was used during the Richard Nixon administration. They had to use it to get his tax returns. It was done back in 2014 when the committee was investigating the non-profit status, that whole IRS gate that Republicans like to talk about. It’s a rule that has been used before and it’s been highly effective.

Democrats on the committee proposed that. Republicans, 23 on that committee, voted it down because they do not want to see what’s in Donald Trump’s tax returns. There’s a good reason why they don’t want to. There’s a good reason why Donald Trump hasn’t shown us his tax returns. There are very clear conflicts of interest at play. We’ve already seen Donald Trump use the Office of the Presidency in ways that should be considered illegal and, by most standards, are considered illegal. The Trump hotel in Washington DC taking payments from foreign officials while Trump has not divested from it. That’s illegal.

That’s why Democrats are so hellbent on getting Donald Trump’s tax returns, on top of the fact that he didn’t even release them during the campaign, which, while not required by law, has been a longstanding tradition in the United States. Every Republican candidate, every Democratic candidate, for the last 30, 40 years has released their tax returns just so that we can make sure that they’re not using the Office of the Presidency to make themselves rich. There was no question when Trump announced that he was running for President, he was doing it because he thought he could make money off it, and he damn sure is right now. That’s why we need to see those tax returns.

Whether you are a Republican or a Democrat, you should be out there demanding that he turn these over, demanding that these 23 Republicans on the House Ways and Means Committee get off their butts and do something, invoke the 1924 law, and check out the tax returns to make sure that Donald Trump doesn’t have a potentially disqualifying conflict of interest because, eventually, these tax returns are going to come out. The longer that Donald Trump waits to release them, the more business he does as President and as a business man before he releases these taxes, the more potential conflicts he creates for himself. The more potential conflicts he creates, the more likely it is that he gets impeached by the end of this year. So for his own sake, he should want to release these tax returns. But he’s too arrogant for that. He thinks he knows better. He thinks he’ll never get caught. That is the white man, 1% mentality. When I do it, it’s not illegal. They literally have said that. When the President does it, it’s not illegal.

So no, we’re not going to get our hands on these tax returns by Trump’s own forfeiting them. We’re going to have to go other ways and that’s what the House Ways and Means Committee, the Democrats on there, were trying to do. And hopefully, maybe, possibly, somebody, a great investigative journalist, can get their hands on these tax returns so we can finally find out just how much money Donald Trump is pulling in off of the shady deals he is making as President of the United States.