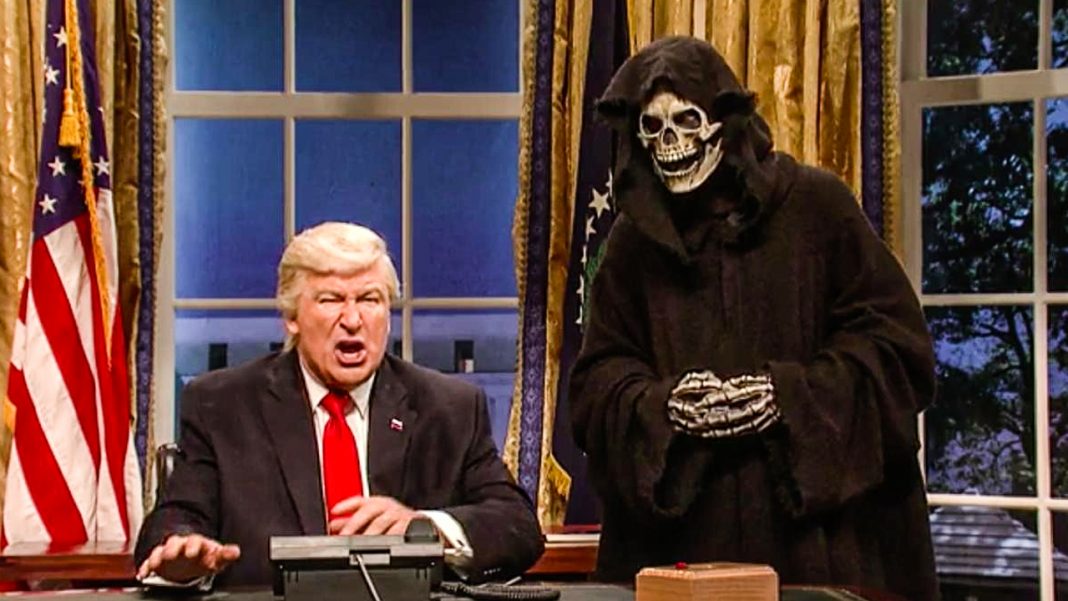 Donald Trump insists that he is the guy in charge, and that’s why Saturday Night Live’s skit showing a skeleton version of Steve Bannon as the REAL president of the United States has Trump worked up into a frenzy.  SNL has attacked Trump’s ego, and they are hitting him where it hurts the most. Ring of Fire’s Farron Cousins discusses this.

According to a report in the Washington Post, White House staffers have said that Donald Trump is basically throwing many temper tantrums over Saturday Night Live’s portrayal not just of him, but of Sean Spicer, by Melissa McCarthy, of the portrayal of Jeff Sessions by Kate McKinnon. More importantly, over the assertion by Saturday Night Live during one of their skits that Steve Bannon is actually the guy in charge in Washington D.C. In one of the latest skits they had Skeletor Bannon come out, make Donald Trump move away from the desk of the President so he could sit down. Trump was then placed in a small table down by the side where he was allowed to color. Basically, that is what is driving Donald Trump insane, because Saturday Night Live has figured out which buttons to push, how hard to push them, and they know exactly what kind of reaction they’re going to get.

Saturday Night Live’s ratings are now at a 20 year high, because of Donald Trump’s little temper tantrums. They’re not going to stop. They see that it’s driving more people to watch their program to see what’s going to happen this week, but more importantly, to see how Donald Trump himself and his administration are going to react. According to this Washington Post article, staffers within the White House are buzzing all throughout the week talking about who might be the next one to be portrayed in an SNL skit. To them, it’s kind of like a game, because they’re just the staffers, they’re the every day people, and you know what? They can take a joke. Donald Trump cannot. It’s really interesting when you think about the fact that during the George W. Bush administration that man rightfully so was made fun of to no end. Saturday Night Live ripped him as this backwoods dullard who couldn’t complete a sentence. The press ripped him for all of his Bush-isms, where he just made up words.

Did it ever get to him? Did he ever throw temper tantrums? Maybe, but nobody said anything if he did. Barack Obama incessantly attacked, not parodied, but attacked by Fox News and you know what he was able to do, because he’s a good guy? He laughed it off at the correspondent’s dinner. He didn’t let it get to him, because it doesn’t matter. Donald Trump is different. Donald Trump is a man who cares about one thing and that is his own personal ego. When Saturday Night Live comes out and makes fun of him, portrays him as less than he is, he can’t stand it. That’s coming from official staffers within the White House, according to this Washington Post article. Again, the best thing in the world that could happen right now is for Saturday Night Live to keep going. I know a lot of people have said, “We don’t want them to keep doing this, they’re just beating a dead horse, it’s not going to be funny anymore.” No, trust me, it’s going to be funny. If not because of the skits, but because of Donald Trump throwing a temper tantrum like a toddler over Saturday Night Live’s portrayal of him and his administration.