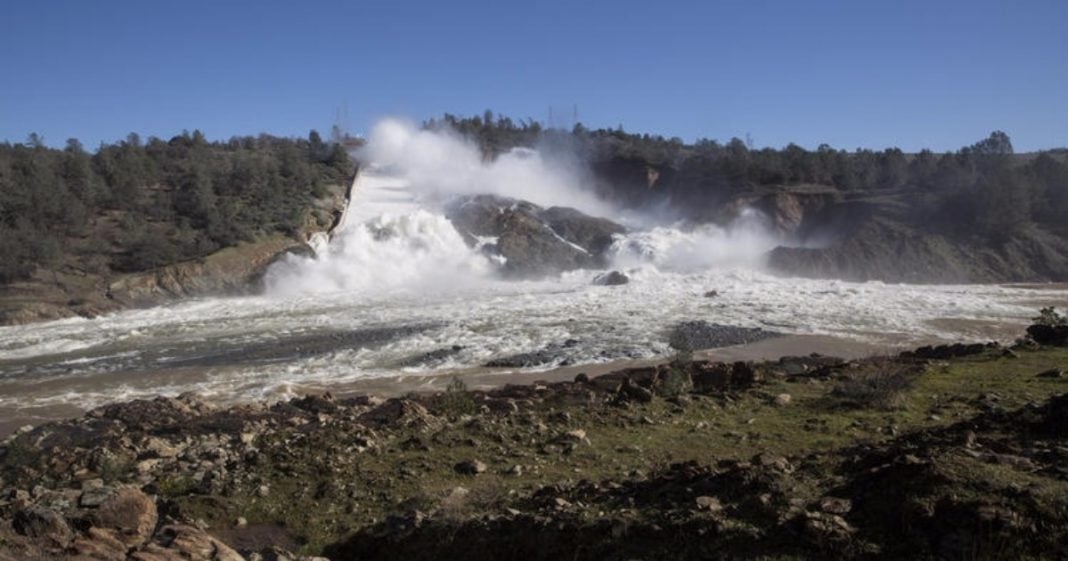 As of this writing, engineers and construction crews are frantically attempting to shore up the nation’s tallest dam above the Northern California town of Oroville, doing everything they can to lower the level of the lake before more torrential rains begin to fall.

So far, the price tag for preventing further disaster has reached $100 million. 200,000 people in downstream communities have been evacuated, and governor Jerry Brown has asked the federal government to declare a state of emergency.

Donald Trump is reportedly monitoring the situation, but has yet to respond to Governor Brown’s request. However, White House Press Secretary Sean Spicer acknowledges that “…the situation is a textbook example of why we need to pursue a major infrastructure package in Congress. Dams, bridges, roads in all parts around the country have fallen into disrepair.”

He adds that  “In order to prevent the next disaster we’ll pursue the President’s vision for an overhaul of our nation’s crumbling infrastructure.”

Without going into the question of whether Donald Trump will actually follow through on his promises to fix infrastructure (not a foregone conclusion, by any means), one must wonder what went wrong in the first place – and how it might have been prevented.

Construction on the 770-foot tall dam began in 1961, and continued for seven years. Located in the Sierra foothills northeast of Sacramento, the Oroville Dam controls the Feather River, directing irrigation water into the California Aquaduct, which delivers precious irrigation water to farmers of the San Joaquin Valley. It also powers the Edward Hyatte Pump Generating Plant, which was the largest underground electrical power generation facility in the nation at one time.

Last week, during an attempt to reduce water levels in Lake Oroville following heavy rains, engineers discovered a crater in the dam’s primary spillway. Ultimately, they were forced to reduce water flow through the primary spillway and open the auxiliary emergency spillway for the first time in the dam’s 50-year existence. The plan worked well – until engineers discovered another hole that threatened the integrity of a retaining wall due to erosion underneath.

That wall was all that was standing between downstream residents and a 30-foot wall of cascading water. The only choice was to direct more water over the damaged main spillway. Fortunately, the hole in the main spillway has not gotten any bigger and repairs are underway – but with more heavy rain in the forecast, the region isn’t out of the woods yet.

When asked why engineers didn’t increase water floor down the damaged spillway to begin with, William Croyle, head of California’s Department of Water Resources, said “This was a new, never-happened-before event.”

There had been warnings, however. Back in October of 2005, a trio of environmental activist organizations that included the Sierra Club and two local groups weighed in during hearings for renewing the dam’s operation license. They warned state and federal agencies that the 47-year-old dam no longer met present-day safety standards, and that heavy rains and a sudden rise in water levels could  put strain on the main spillway. Water flowing down the emergency auxiliary spillway – which is little more than a cement barrier directing water over a bare hillside – could lead to erosion, compromising it and putting downstream communities in danger of flooding. They recommended that the emergency spillway be reinforced with concrete.

Those warnings were ignored. According to Ron Stork, a policy director with Sacramento-based Friends of the River, officials at the time “tried to be as evasive as possible,” because “it would have cost money to build a proper concrete spillway.”

Since Oroville Dam’s license expired in January of 2007, it has been operating under a series of “temporary” licenses.

Today, we are witnessing the result of this  “false economy.” This seems to be the principle guiding federal  policy makers – cut corners today and let tomorrow take care of itself. Well, for better or worse, “tomorrow” has arrived – and as usual, it is going to wind up being far more expensive to repair the damage than it would have been to prevent it from happening in the first place.

It will be interesting to see if the Trump Administration will bring any change to this mentality – but given Donnie’s track record so far, we ain’t holding our breath.