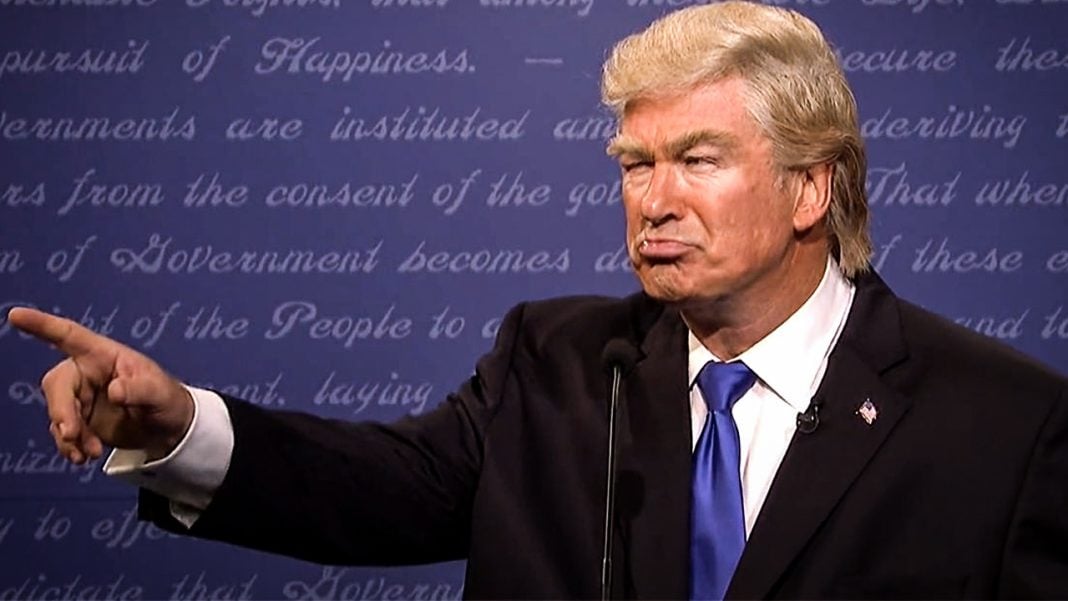 Donald Trump was very upset by Saturday Night Live’s portrayal of Sean Spicer by a woman (Melissa McCarthy) so SNL decided to up the ante this past weekend by not only featuring McCarthy as Spicer again, but having Kate McKinnon play Jeff Sessions, portraying Kellyanne Conway as a psychopath in a Fatal Attraction spoof, and with a skit showing Alec Baldwin’s Trump go to The People’s Court to appeal the 9th Circuit decision on his Muslim Ban.  Trump picked a fight with Saturday Night Live, and he’s losing spectacularly. Ring of Fire’s Farron Cousins discusses this.

Last weekend, Saturday Night Live had Melissa McCarthy spoof Sean Spicer, a move that made the White House very angry because they didn’t want to see a woman portraying a man in the White House. Now, here’s where things got a little bit more predictable. We saw how angry the Trump administration was about Saturday Night Live’s portrayal of Sean Spicer by Melissa McCarthy. So it was very predictable when this weekend they decided to do it again, to an even greater degree. In addition to Melissa McCarthy returning as Sean Spicer, they also had Kate McKinnon show up as Jeff Sessions. They had several other cast members do a parody video auditioning to be the new Trump, most of them women. They also had Kellyanne Conway portrayed as the psychopath from Fatal Attraction, terrorizing Jake Tapper, attempting to get back on CNN. And they had Donald Trump show up in the People’s Court to take on the Ninth Circuit Ruling that said his Muslim ban wasn’t going to fly.

You do not pick a fight with the media outlet. That’s just one of the dumbest things you can do. But Trump doesn’t understand that. He’s used to bullying, he’s used to getting his way. So he thinks that if he or his administration come out and attack Saturday Night Live, like Trump has done so many times on Twitter, that they can make them stop. But it’s not going to happen. This satire that Saturday Night Live is putting out is proving to be one of the best defenses against the Trump administration himself.

And that’s why it is important to talk about this. Now, I’ve seen some people on Twitter say that why are we even talking about Saturday Night Live, this isn’t really news, we’re missing the big issues. But it is. They’re portraying the President actually pretty accurately. And American people of both sides, both parties, watch this show. It is forming their opinion, just like the Daily Show used to with Jon Stewart, just like the Colbert Report did. That’s why this is important. This isn’t something to just gloss over. This is something that actually has an impact in American society. Pop culture very frequently influences our politics. If it didn’t, we wouldn’t have a reality show TV star as our President. So don’t tell me that it’s not important, don’t tell me that it doesn’t matter, because it is. Because right now, Saturday Night Live is producing one of the greatest nationwide push backs against the Trump Administration. And that’s something that we don’t see from a media outlet too often.