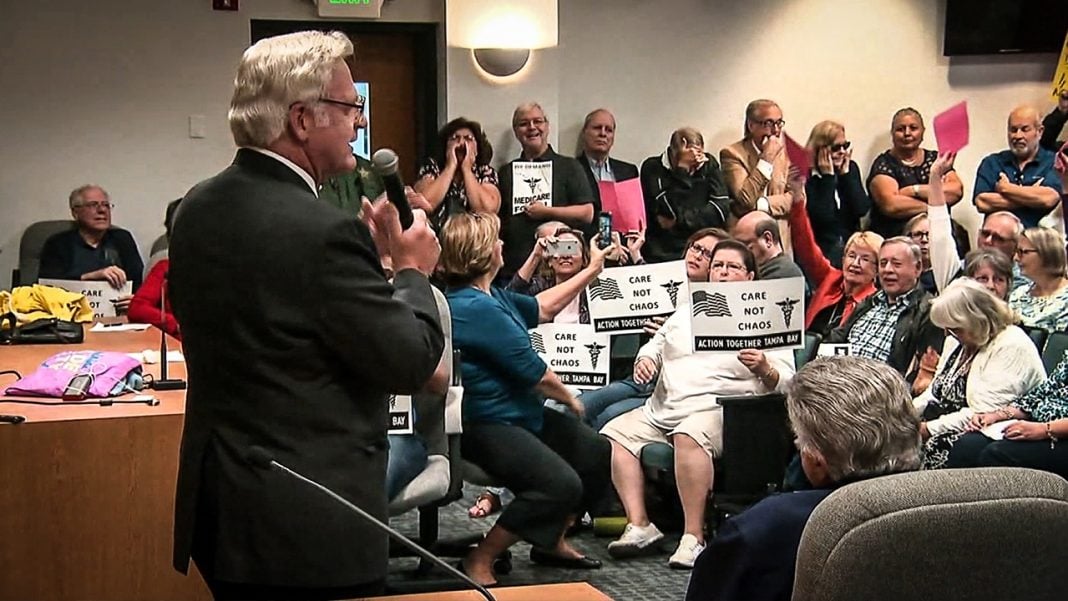 At a healthcare town hall rally in South Florida, a Republican Party chair said that the reason he and his party were opposed to the Affordable Care Act (Obamacare) was because it created Death Panels.  The crowd saw through the lies and erupted in anger over the bogus remark. Ring of Fire’s Farron Cousins discusses this.

Akins: Here’s the problems I have with the Affordable Health Care act. Number one, there is a provision in there that anyone over the age of 74 has to go before what is effectively a death panel. (Jeers) Yes, they do. Yes, they do. It’s in there, folks. You’re wrong. OK, children, all right, children.

Cousins: In 2009, PolitiFact rated the death panel as the lie of the year. There is nothing in the Affordable Care Act, Obamacare, that refers to any kind of death panel, but here we have Bill Akins telling us that, “Hey, once you hit the age of 65, sorry, you have to go up in front of a death panel and essentially plea for your life.”

The only good thing to come out of that South Florida rally or town hall, whatever you want to call it, is the fact that the mostly senior citizen crowd there did not buy into what Akins was saying. As you saw from the video, they became angry. They started jeering, and so Akins responded in the most mature way possible by calling these elderly citizens concerned about losing their health insurance, he called them children.

Hopefully, Bill Akins just caused Gus Bilirakis his seat in the 2018 midterms because that’s what he deserves. That’s what Bilirakis deserves. Republicans are hosting these little town halls all over the country now trying to convince Americans that, “Hey. Look. Trust us. Republicans have a plan to replace the Affordable Care Act. You just got to trust us. We hate the Affordable Care Act and we’re going to give you a bunch of bullshit reasons as to why that is.”

There are no death panels and Republicans know it and the public knows it. The only reason Republicans want to repeal the Affordable Care Act is because it raises taxes slightly on 400 families within the United States. That’s it. 400 families have their taxes go up slightly because of the Affordable Care Act. That’s how we pay for some of the subsidies.

I don’t think anybody thinks that it’s a better idea to give more money to the top 1% of the 1% while screwing over millions of people who are literally going to end up dying, according to studies about 48,000 a year, because they can’t afford health insurance coverage.

Now, why aren’t they just being honest? If you don’t like Obamacare, be straight with us. We get it. We know the Republicans rule for the wealthy and not for the people, but don’t sit there and try to lie to us telling us that once we hit age 65, we have to go put on our best suit and show up in front of a death panel and tell them why we need to keep on living, because everybody at this point knows that that’s just not true.