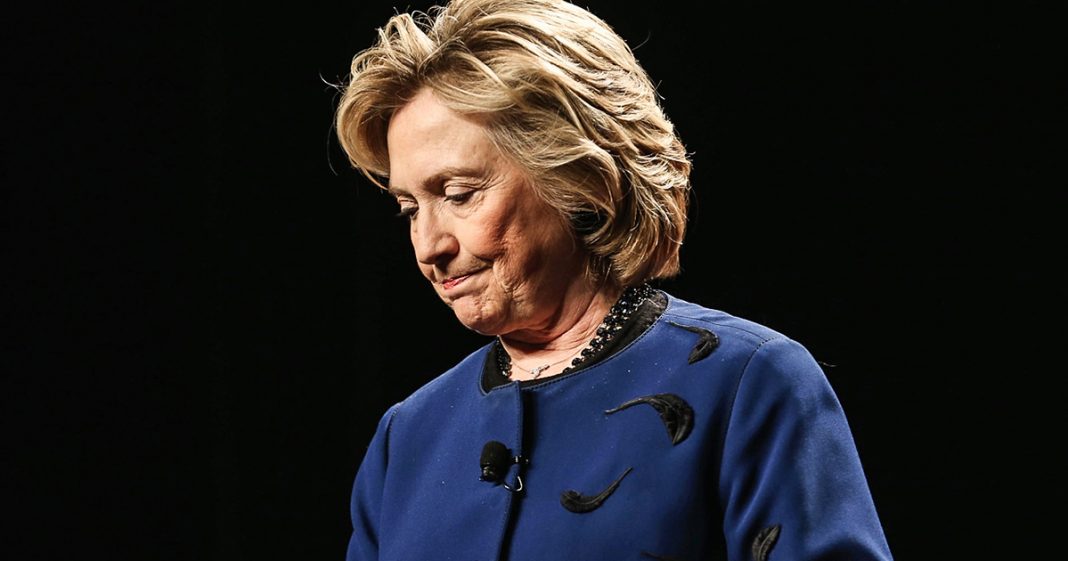 Politico ran an article this weekend claiming that Hillary Clinton would definitely run for president again in 2020, and her supporters seem to be all in favor of that notion. While the article was speculation, it helped to re-launch the conversation about the failings of the Democratic Party and the need to rebuild from the ground up.  If that doesn’t happen, Democrats can be certain of an 8-year Trump term in the White House. Ring of Fire’s Farron Cousins discusses this.

Over the weekend Politico ran an article saying that Hillary Clinton was definitely going to run for president in 2020. Now, this article was not based on any information from outside sources. It wasn’t based on anything Hillary Clinton said. The author of the article said he simply, “I, I just know this is going to happen, and it’s what we need to happen.” Well, Hillary Clinton supporters were all thrilled by this. Hell, yeah! If Hillary Clinton runs and wins in 2020, it’ll prove that the 2016 election was stolen from her. And then, I don’t know, because it’s the dumbest argument I’ve ever heard.

They can only blame themselves at this point, because when you look around, when you see what’s happened to the Democratic Party, it’s exactly what the Republican Party was back in 2004 and 2008. Those of us who were in this business during that time recognize the problems with the Republican Party and why they were such pieces of crap. They were taking money from corporations, consistently ruling for those corporations and against the American public. God, back in 2004 and through 2008, almost every story that we did, we just followed the money to find out why a Republican voted a certain way. And there it is. Oh, they voted to open up the Arctic for drilling, because they took all this money from the oil companies.

Today, the Democratic party of 2017 is identical to the Republican Party of 2004. There’s no difference between the two except on a few social issues. That’s where the Democrats still have a little bit of support, that’s why they still have a little bit of support. Because, hey, we’re for equality, so vote for us. We’re still going to take money from corporations. We’re still going to screw you over just like the Republicans do, but we’re going to claim to be better on social issues even though every issue, environmental, economic, those are all social issues as well. Because minorities are disproportionately more affected by environmental issues and economic collapses. That is a fact. But the Democrats don’t want you to know that part. They think that they can continue going out there hosting these million dollar fundraisers and tell us that they rule for the people. They think they can go out there, take all this money from Wall Street, all this money from the oil industry and gas industry and coal, and tell us that, “No, we’re going to protect the environment. We’re going to enact strict banking regulations.”

They didn’t do it during Obama. We had little bits and pieces of progress here and there; not enough to really say that Obama was a great president. That’s why we keep losing, because the Democratic Party believes that they can still have it both ways. That they can take the corporate money, tell citizens and voters one thing, and then meet somewhere in the middle that gives more to corporations, kind of screws the public, but not overtly like Republicans do it. That’s why the Democratic Party today is in shambles, because they’re not smart enough to understand their own problems. They’re not self-aware enough to look in the mirror and say, “Maybe it’s me. Maybe I’m the one screwing up. Maybe I’m the one who helped tank this party.” That’s what Hillary Clinton needs to be doing right now. That’s what David Brock needs to be doing, and John Podesta, and Debbie Wasserman Schultz. They need to look at the mirror and say, “I did this. Time for me to leave the party, because I’m destroying it.”

I hope Politico is wrong, and I hope Hillary Clinton does not run again in 2020, because she will not win. Yeah, she won the popular vote in 2016, and that’s great. Right? I guess. But, it’s the Electoral College that matters, so the popular vote really means nothing, unfortunately. She was rejected by voters in the 2008 primary who chose Borak Obama over her. She’s lost two presidential elections in the last eight years, let’s not add a third to that list.