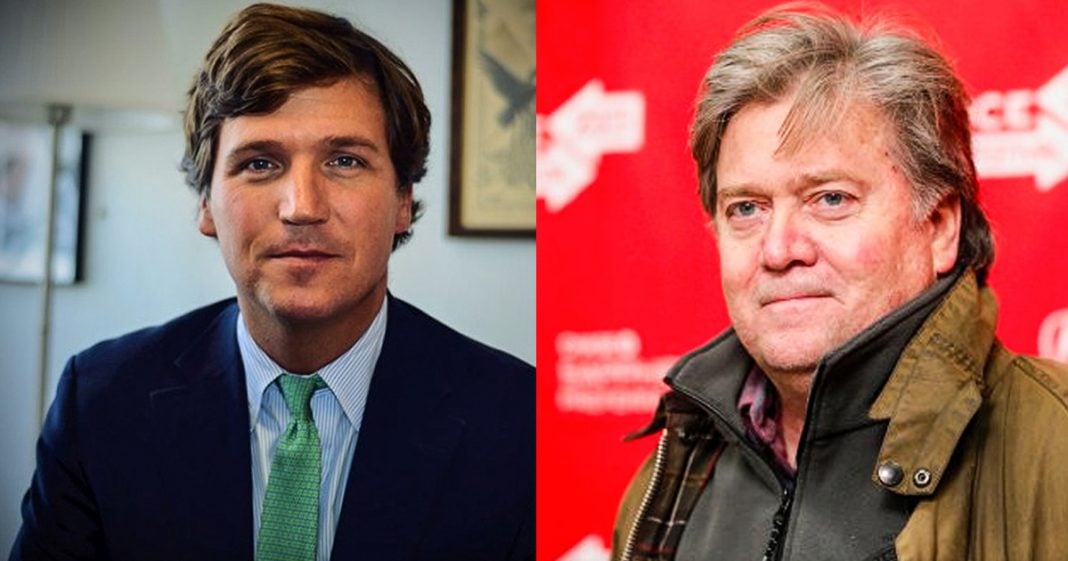 During a bizarre interview this week, Fox News’ Tucker Carlson displayed a graphic showing that showed how White House Senior Counsel Steve Bannon wasn’t as bad as Abu Bakr al-Baghdadi, the current leader of ISIS.  There is a little bit of context to consider, but the fact that Fox News would have to create a graphic like this shows how bad Bannon really is. Ring of Fire’s Farron Cousins discusses this.

We all know that Steve Bannon is a pretty bad guy, right? A bad policy adviser, ties to white nationalists, offers apologies for white nationalists, pretty bad guy but hey, at least he’s not ISIS, right? If you think that’s an absurd argument to make because obviously Steve Bannon is not ISIS, then you need to pay attention to Tucker Carlson on Fox News a little bit more because that is literally the argument that he was forced to make this week when talking to a reporter from USA Today. Tucker Carlson had to really show that Steve Bannon is not as bad as ISIS.

Now here’s a little bit of context for you. USA Today had written an article discussing the fact that Steve Bannon shares a similar worldview to Abu al-Baghdadi, the leader of ISIS, and that worldview is that there is this consistent conflict between the West and Muslim countries in the Middle East and that this conflict is always going to breed chaos or some kind of warfare. ISIS believes that. They believe that they are at war with the West, and Steve Bannon believes that he’s said as much, and he believes that the United States will always be at war with Islam, so yes they do share that very similar worldview and that is what the USA Today article was trying to explain.

Tucker Carlson offers an interview to USA Today, come on the show, explain this, during which time, Tucker Carlson actually had to put up this graphic on the screen to show that no, Steve Bannon isn’t quite as bad as ISIS.

Now listen. I understand, look, Steve Bannon as far as I know has never personally beheaded someone. Steve Bannon probably hasn’t used chemical weapons against his enemies, so yeah, Steve Bannon probably, probably not as bad as ISIS, but for an American, for somebody who is in a position to make policy that gets in front of the President to be signed without reading, for him to share a similar worldview to the leader of ISIS represents a problem. The fact that Fox News had to go out there and reassure people that Steve Bannon is not as bad as ISIS is a bad thing. It’s not good that they went out there to defend him. It’s bad that they had to stoop to that level.

Well he’s not ISIS. He hasn’t personally murdered anyone because they opposed him, yet. Do you see why that argument is so dangerous for the United States? We cannot compare one evil to another and say, “Well, this one is not bad when you compare it. He’s not Hitler. He’s not Stalin, I guess.” No, Steve Bannon is a horrible waste of a human being and that’s all we need to be concerned with. Has he personally murdered anybody? I’m going to go ahead and say he probably hasn’t but that’s not the ultimate test of how evil a person is. He still believes the same thing that the leaders of ISIS believe. He’s just on another side, and that’s what we need to take away from this, not that Steve Bannon isn’t as bad as ISIS, but that he thinks in the same manner as the people that we call terrorists.