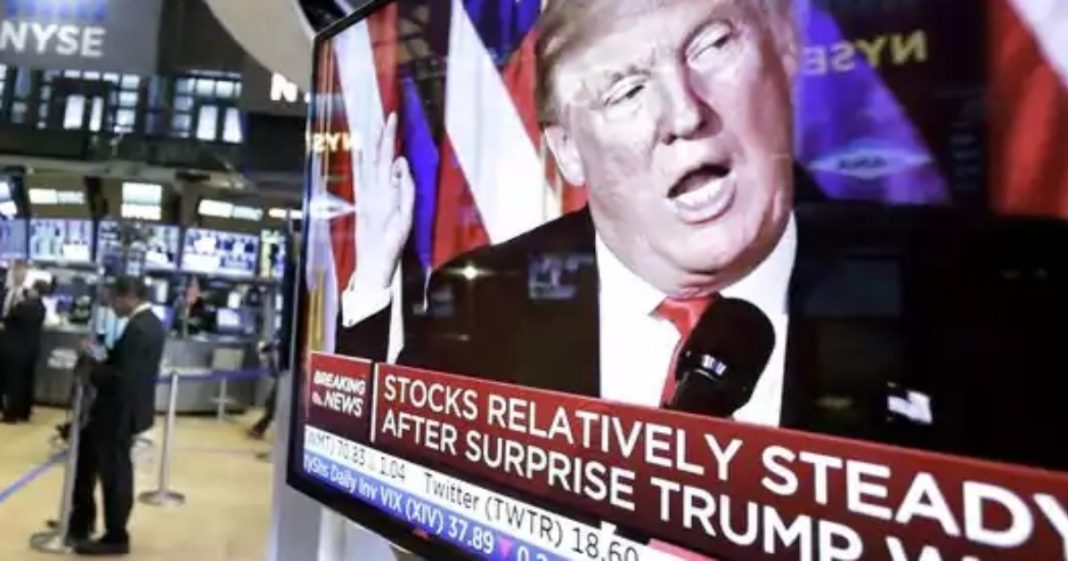 The Barons of Wall Street were celebrating when one of their own managed to worm his way into the White House; salivating over the prospect of massive corporate tax cuts, deregulation (including the repeal of Dodd-Frank), and other “reforms” that will accelerate America’s ongoing return to the Gilded Age, those self-styled “Masters of the Universe” started looking forward to fattening their already bloated coffers at the expense of everyone else as the Dow hit its all-time high of over 20,000.

Now, reality is setting in.

According to analysts at Credit Suisse, early optimism among the investor class over Trump’s favorability is being “replaced by a wait and see approach…along with a healthy dose of frustration.”

In short, the brief honeymoon is over. Specifically, there are concerns about Trump’s tax cuts and where he plans to spend federal money. Investors are nervous about the U.S. pulling out of trade deals, and the prospect of new tariffs (the “border tax”) as well as the resulting effects on retailers. They’re also worried about rising populism, and rightfully so. For the most part however, it is the uncertainty that has Wall Street jittery.

Trump talks a good game – but will he actually be able to deliver?

There’s another element that has investors nervous – and that’s Trump’s touted plans for creating a “more Germany-style economy” in the words of National Trade Council Peter Navarro, in which “20 percent of our workforce is in manufacturing.” That isn’t good news for a system that has profited so handsomely from a generation of “supply-side” economic policy based on consumer demand for cheap goods made in sweatshops overseas.

And even if a few of Wall Street’s wishes materialize – such as corporate tax cuts being enacted and pesky financial regulations getting repealed – they’re unlikely to do so this year, since the Republicans in Congress have their hands full trying to do away with the ACA (which, as they are discovering, is more easily said than done).

Historically, there is also a correlation between a President’s popularity and the stock market, although research in this area is still unclear as to whether Presidential approval ratings affect stock value or vice-versa. As of this writing, according to a Gallup poll, Trump has a 43% approval rating – while economic confidence is down by two points.

That situation is not getting any better for Trump, though it may bode well for the markets; recent calls for boycotts by right-wing whiners against corporate retailers who have the gall to criticize the Almighty Trump or go against his policies have had very little effect on the revenues of those companies targeted. Nordstrom, the latest retailer to poke the bear, has even seen a stock boost from their clash with the president, a reversal of previous similar clashes.

The bottom line: markets prefer certainty. With an unpredictable, mentally unstable, politically ignorant man-child at the helm of state, certainty is the last thing that Wall Street can expect.