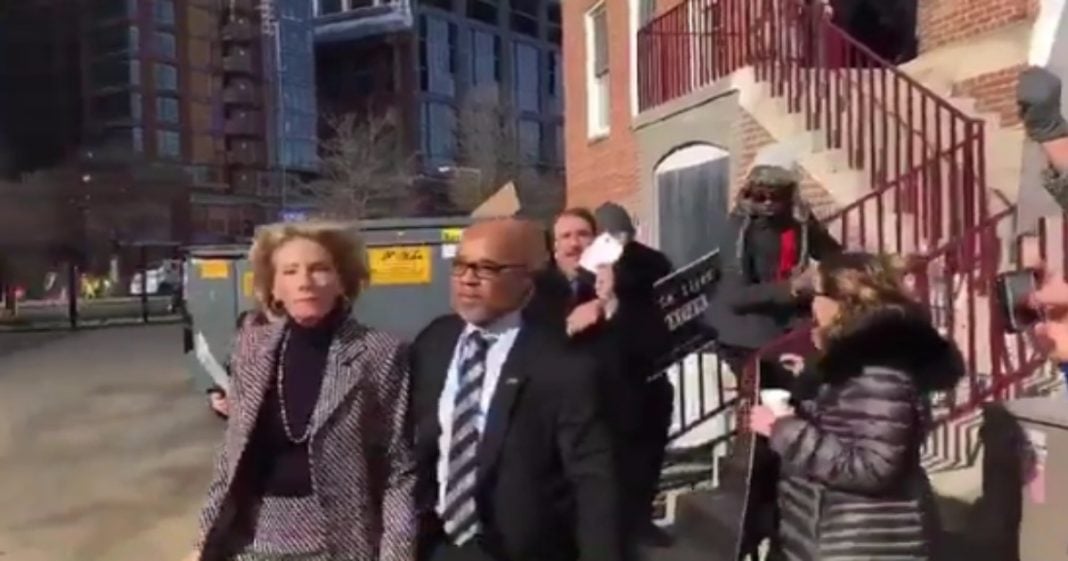 Update: At the time of publishing, full details about this incident had still not yet emerged. Now we know that after being stopped by protesters, DeVos was later granted entrance to the school and conducted her tour as planned.

Betsy DeVos may have officially become the Secretary of Education, but her money can’t buy her acceptance from the American people as she learned on Friday morning when a group of protesters blocked her way into a D.C. School.

According to WJLA News, a local D.C. news station, DeVos was attempting to enter the Jefferson Academy in Southwest D.C. this morning when a small but determined group of protesters wielding signs and shouting “shame,” turned her away at the door.

DeVos was at the school to attend an event organized by the Washington Teacher’s Union who had arranged a sit-down with the Secretary despite their differences.

“The union, who said they did not support DeVos’ nomination, hopes that she is successful. They said if DeVos succeeds in her role than everyone succeeds – including all public schools and teachers.”

Despite this attempt at bridging the gap between multi-million know-nothing and a union of experienced teachers, the group of protesters had no interest in giving DeVos a fair shot.

DeVos appeared flustered by the anger of the protesters, but chose not to engage with them. Instead, it appears she immediately turned around and retreated back to her vehicle, leaving the scene.

Later, she was granted entrance to the school and conducted her tour as planned with the lasting impression of her previous encounter guiding her.

The Jefferson Academy isn’t the only place responding strongly in opposition to DeVos’s confirmation – many parents across the nation are now considering homeschooling their children in the hopes of avoiding the damage DeVos will no doubt cause.

DeVos’s confirmation was also the most highly contentious of any in history, and the fact that the Vice President had to make a tie-breaking vote to confirm her should weigh heavily on her mind.

The government might have failed the people by appointing this heavy-pocketed official, but the American people are still saying, “No” to DeVos.