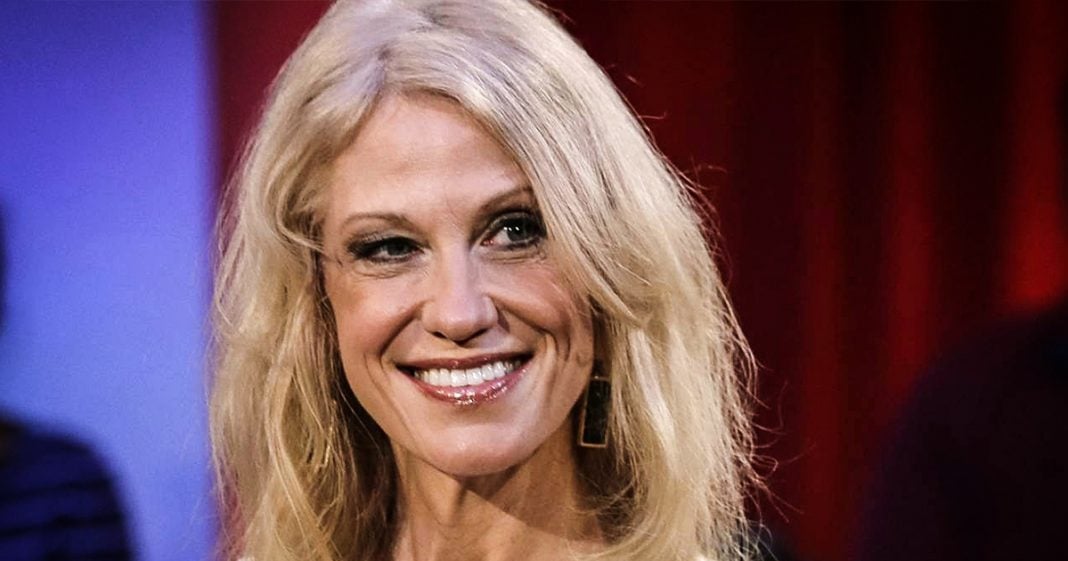 Following an announcement by retail giant Nordstrom’s that they would be dropping the line of merchandise by Ivanka Trump due to lagging sales, White House advisor Kellyanne Conway went on Fox News and pleaded with Americans to “buy Ivanka’s stuff!”  Unfortunately for Conway, making a sales pitch for the president’s daughter while acting as his ambassador is highly unethical and likely illegal, and she now finds herself in the middle of an ethics investigation that likely won’t end well for her. Ring of Fire’s Farron Cousins discusses this.

The popular retail store Nordstrom’s announced earlier this week they were going to be pulling Ivanka Trump’s merchandise from their shelves, saying that it, “Simply is not selling. We want to make way for things people actually want to buy.” Obviously anytime you go after a Trump or say something negative or do something that adversely impacts a Trump, Donald’s going to get on Twitter and he’s going to go after you, which is exactly what he did to Nordstrom’s. Saying that, “They’re being so mean to my daughter. You got to stop this. This isn’t fair. I thought we had a free society.” We do. This is the free market speaking Republicans, because I’ve seen a lot of Republicans be super pissed saying, “We’re not going to shop at Nordstrom’s anymore.” Okay, but you’re the ones who say that we need to have a free market that makes all the decisions. You’re perfectly fine with laws being passed at the state level saying that if you own a shop and you don’t want to serve gay people you don’t have to, but suddenly you go against one white woman and it’s the end of the world because her stuff isn’t selling because the majority of the public hates her because her family is such a racist, bigoted, xenophobic, horrendous mess? That’s what you have a problem with?

Now, she is the target of several ethics complaints, not just from Democrats or democratic organizations, Representative Jason Chaffetz have referred the case to the House Ethics Committee in order for them to look into this, see if she broke the law, and if she did she’s got to go. Kellyanne Conway has been in her position at the White House for three weeks now. Three weeks she’s had this official job. It only took her three weeks to break the law. This is exactly what everybody expected was going to happen. We knew that Donald Trump was going to have some kind of conflict of interest with his businesses, we knew that he couldn’t keep out of it, and boom, it’s already claiming it’s first victim of Kellyanne Conway.

It’s going to take a bit. We’re going to see where this story goes. Obviously, the greatest thing to happen would be to get her out of there because she is a cancer in this administration, a cancer on the American society, but she’s also been the source of a lot of laughs. At one part she needs to go because she’s horrible, but on the other, kind of gonna miss making fun of her sometimes. The bottom line is that you cannot, as an ambassador to the White House, as an ambassador for the President of the United States, you can’t go tell people what to buy from where and from whom. That crosses a line that I thought Republicans were all in favor of keeping. “Government, stay out of the issue of business.” Now we have a literal sitting Republican administration advocating you to buy one brand over another. That’s government overreach if I’ve ever seen it. That’s government interfering with the free market if we’ve ever seen it.

The moral of the story, to all media outlets out there, stop putting Kellyanne Conway on the air. When she’s not making up phony massacres she’s using the airtime as some kind of fake infomercial pitch for a brand that American’s don’t even want to buy. I’m sure you can probably find somebody much more interesting, much more intelligent to talk to than Kellyanne Conway.