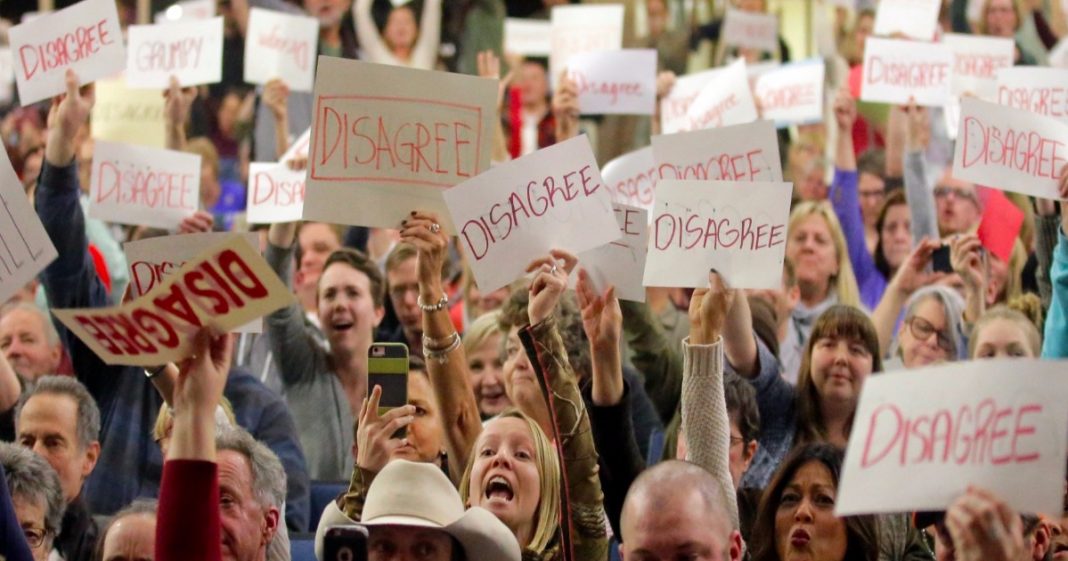 When Representative Jason Chaffetz traveled to the district he represents in Congress for a town hall event in Utah, he could not possibly have predicted the level of anger and vitriol he would face from such a conservative area.

Chaffetz was the face of Hillary Clinton’s Benghazi hearings where he subjected her to hours of questioning and became a hero among conservatives for his apparent dedication to truth and justice. And yet three weeks into Trump’s presidency, with ethical and legal violations occurring left and right, Chaffetz and the rest haven’t said a damn thing.

The partisan change in tone was not missed by Chaffetz’s constituents who took their time on a weeknight to attend a town hall for their congressman – and the weren’t happy.  What Chaffetz discovered was a roaring crowd filled to the brim in a school auditorium shouting at the man, “Do your job!”

During the event, a child asked Chaffetz if he believed in science before quickly answering his own question with, “I do!” to approval from the crowd.

Another woman, a longtime school teacher, told Chaffetz that when a new school year begins, there are often children that she knows within two to three weeks are going to be “trouble.”

“Well, It’s been two to three weeks,” the woman declared before being drowned out by the crowd who gave her a standing ovation, waving signs that read “agree.”

She then told Chaffetz that it was his job as a congressman to draw a line in the sand for the president. A line which, if stepped over, would result in a consequence – impeachment.

There weren’t just one or two instances of strong-worded condemnations of Chaffetz’ refusal to stand up to Trump. Every person in the crowd was furious to see their elected official doing nothing in the face of Trump’s gross executive overreach.

“Do your job,” they all said – with the unspoken second part of that statement being, “or lose it.”

Watch this teacher lay it out clearly at #ChaffetzTownHall #resist #TheResistance pic.twitter.com/9lW7N0nzCq