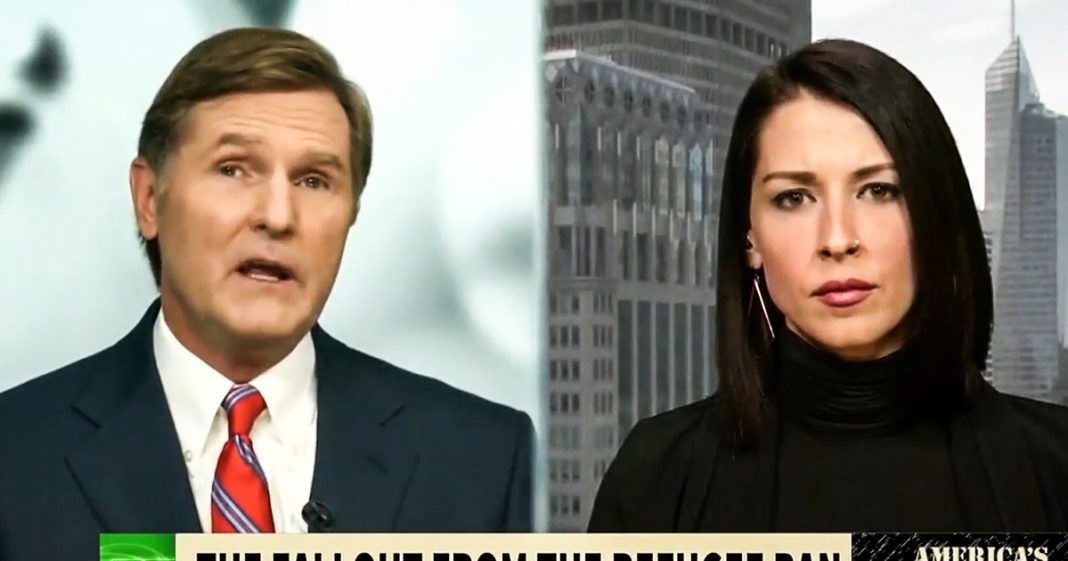 Mike Papantonio talks to creator and host of The Empire Files, Abby Martin, about what’s really behind Trump’s immigration and refugee ban and what we should expect from future legal fights over the issue.

Mike Papantonio: The Trump administration has defended its immigration and refugee ban by continually claiming that the executive order is going to protect Americans from terrorist attacks. The only problem with that argument is that a study by the Cato Institute found that your chances of getting killed by a refugee terrorist in the United States is about 1 in 3.6 billion. In fact, not one refugee from the seven countries impacted by the ban has ever killed anyone on American soil. Here to discuss what’s really behind this executive order is honestly one of the most talented people in this business, Abby Martin, creator and host of The Empire Files on TeleSUR TV.

This is about pushing forward this temporary measure to inevitably make it indefinite to inevitably make it permanent. It is indeed a ban. Giuliani said on TV that Trump came to him and said similarly that Bush did when he wanted to make torture legal and went to John Yoo. Giuliani said that Trump came to him and said, “I want to ban Muslims. How do I do this?” This is appealing to a radical, xenophobic base of people.

Mike Papantonio: Abby, let me back up just a little bit. First of all, I described this two ways. We had Obama who could give a wonderful speech, but his ability to execute on anything, as we’ve seen over the last eight years, it’s terrifying. He gives these great ideas, sets them out there, and his execution is nonexistent. You got Trump on the other side. It’s almost a management thing. Really, when you look at the way this is being done, you got Trump on the other side gives a speech. You almost don’t even know what he’s talking about most of the time, but he’s made these promises and he’s executing. I know you and I have talked about this in the past in some form or fashion, but we saw eight years of Obama not, the first two years when he controlled the House and he controlled the Senate, taking no action.

Now we got Trump in office, and he is absolutely … Every day we’re seeing a new executive order. We’re seeing protests of every kind, whether refugee, an immigrant ban. Why do you think this issue, in particular, has people so strongly, so upset, when they know this is what the guy said he, this is what he campaigned on? This is what he said he was going to do, and he’s doing it. [crosstalk 00:03:08]

Abby Martin: I think it shows honestly the ineptitude of Obama and the inability to really make any sort of decisions, especially when he had control of Congress for two years, but juxtaposing that, I think that people really see this as a line in the sand, Pap. This is history in the making real time. If you’re not going to draw a line in the sand and take the right side of history moving forward, then who the hell are you? People understand that the intermotive Japanese Americas was done via executive order. We’ve seen these things happen in fascistic, demagoguery states before. I think people are really riled up.

The majority of people in this country are not racist. The majority of people in this country abhor Trump. They do not agree with this mandate that he’s given himself to do these things. People are very taken aback by the Gestapo-like force that the Trump administration is carrying out this order, and they are standing up and saying, “No more. We will stand and fight with our Muslim brothers and sisters no matter what,” Pap, and that’s really what’s going on here.

Mike Papantonio: These protests taking place, it’s amazing to me when I’m looking at these polls. We’ve seen Reuters, for example. 49% of Americans agree with the ban. 41% disagree. I’ve seen polls even higher than that. 52%, 54% agreeing with this ban. What do you make of that? There’s always the argument that this type of thing is always driven by fear. Right now, Trump did make the Muslim issue the boogeyman issue. How do you count for the American public saying, “You know, it’s probably okay that you ban people from the country.” What’s your take on it?

Abby Martin: Islamophobia doesn’t happen in a vacuum. Trump is not an aberration. People are pretending like this is just some shocking thing that’s happened overnight. Islamophobia has been fostered and cultivated in this country for the last 15 years. Through the Obama administration, the bombing of seven predominantly Muslim countries, the continuation of the mass surveillance and police state essentially making Muslims the victim. Look, demonization and dehumanization of Muslims is a necessity in order for the US Empire to carry out its goals around the world. This has been an environment that has been cultivated in Harvard by the entire administration in a completely bipartisan way, Pap.

It’s really, really fascinating that people want to point to Trump as the next Hitler. Who has allowed this entire apparatus to be built? This is what progressives like you and me have been warning about the last eight years. Hey, don’t sign the NDAA. Hey, roll back these things. Prosecute war criminals. You know why? Because we were trying to warn against someone like Trump getting into power and ruling this entire empire, Pap, and here it is.

Mike Papantonio: There were reports when the ban initially went into effect, the border control agents were defying court orders. Dallas airport, Virginia, not allowing lawyers to even see people being detained. Is this what we should expect from future legal conflicts? Look, we’re here. This is a guy that’s going to get it done. Like it or not, the American public knew that when he came into office. They voted for that. They were afraid of the immigration issue. They were afraid of the Muslim issue. He said, “I’m going to take care of it.” He’s taking care of it, but now there’s such conflict. When he writes these orders, these executive orders, they show up the next day and the American public goes, “Oh, my God. He really did it.”

What do you expect in the future? I don’t see anything different. This is a guy who takes command of what he’s promised, and I believe we’re going to see that in the future. What’s your take?

Abby Martin: I wanted to also say that this is not about safety and security. This is about pursuing a a white ethnonationalist supremacy over the states. Steve Bannon has said this time and again. Him and Trump have argued in interviews before. You look at just their words over the last five years. Steve Bannon said he even hates Asians. He said that there shouldn’t be any Asian CEOs in Silicon Valley. This is what these people believe. Steve Bannon has hijacked Trump’s mind and he’s pushing through, railroading, steamrolling all of this legislation through. It’s obvious that he’s writing these executive orders. They’re very similar to Breitbart Language.

When it comes to the DHS and police agencies, I think that these are very fascistic in their nature. On a side note, DHS was created in the Bush administration, the wake of 9/11, but you really haven’t seen the complete embracing of a presidential candidate from these agencies before. There was this unprecedented support from police, even when Trump won. In Manhattan, I saw a bunch of cops riding around blasting, “I’m proud to be an American,” wearing MAGA hats. There was just a story the other day about a bunch of police officers that were actually told to stop wearing Make America Great Again hats on the job.

I think that there could be a constitutional crisis within these agencies, especially when they are acting on behalf knowing that the state has their back, and they can act completely unrestrained. We already see what the police do with total impunity in this country.

Mike Papantonio: Abby, I got to tell you. I’m glad you’re up reporting about it. I hope you’ll come on more. We’ll talk about this as it all develops. It’s just started developing. Thank you for joining me.