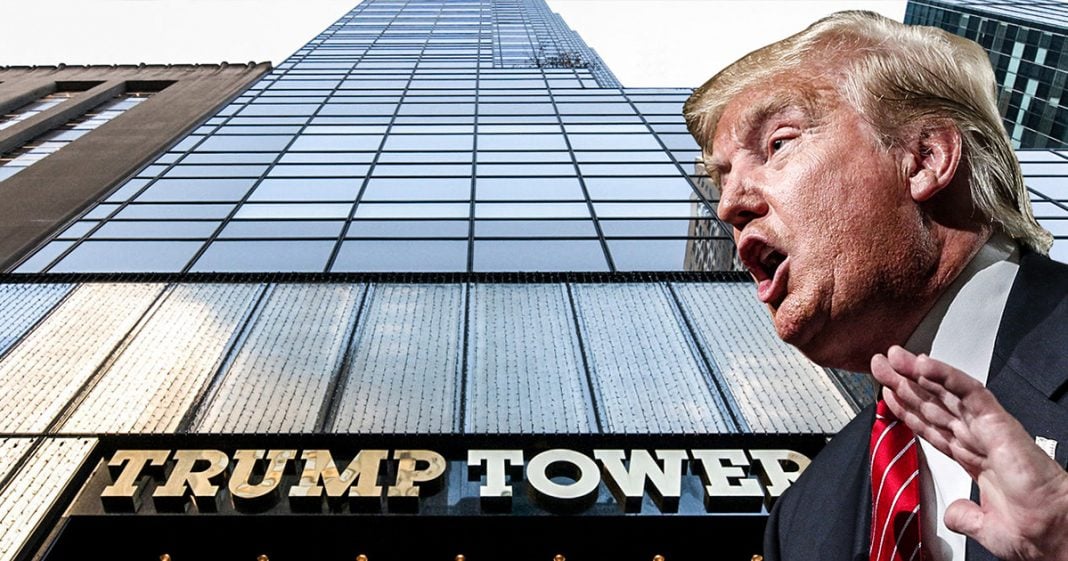 Since Donald Trump has decided that he doesn’t want to spend all of his time in The White House, the military is looking to lease space in Trump Tower in order to maintain a close presence to the President, which includes being nearby with the “nuclear football.”  This will cost taxpayers no less than $1.5 million a year – money that goes right back into Donald Trump’s pocket. Ring of Fire’s Farron Cousins discusses this.

Donald Trump is going to make damn sure that he uses the office of the Presidency to put more money in his pocket. The latest issue that we’ve seen with this, the latest piece of evidence that we have is the fact that the US military, the Department of Defense is actually looking to lease space, lease an apartment, lease an entire floor in Trump Tower in New York City. Now the reason they’re doing this is not because they want to give Donald Trump more money, it’s because Trump has decided that he wants to kind of split his time between DC and New York City, and in doing so, the military, the secret service, all those people involved in protecting the President, and having everything ready for him when he needs it, have to be somewhere, so they have to be in Trump Tower.

Trump’s decision to split his time has forced the military to look for space to lease in Trump Tower, which that money will then go directly into the pocket of Donald Trump. Now the minimum space that they could lease in the Tower would cost 1.5 million dollars a year. That’s 1.5 million dollars a year that’s paid for by us, the taxpayers for a man who doesn’t pay his taxes. That 1.5 million dollars of our tax money, at least if they rented bigger space, it’s going to be a lot more than that goes directly in his pocket. It’s owned by the Trump organization. He still gets the profits off of that. Whether or not he put it in a blind trust is irrelevant, because money paid directly to that company will still end up in his pocket, all because he doesn’t want to live in the White House all the time.

Now here’s the thing. The military has to do this, because they have what’s known as the little military football, the little box that has the nuclear codes in it, ready to go. That’s even worse when you think about it. They have to be right there next to him in Trump Tower in case he want’s to launch a nuclear strike. Think about that for a second. Donald Trump has to have somebody around him all the time with nuclear codes, just so that he can launch nuclear strikes against anyone at the drop of a hat. That’s even more terrifying.

Now Republicans are already jumping to defend this issue, saying that other President’s have done the same thing, they had to rent a space in Chicago for Barack Obama, you know the military had to in Chicago. Yeah, Barack Obama didn’t own the apartment building though. He didn’t lease them one of his properties and then pocket the money. That’s the issue. The issue isn’t that they have to be near him, it’s that he’s living in his own building and so we the taxpayers are paying for this. We’re paying to have somebody stand near Donald Trump in case that psychopath wants to launch a nuclear strike, and Donald Trump gets that money.

That’s what the Presidency is about to him. How much money can he make off it? We saw earlier this week, he’s tweeting out angry things at Nordstrom’s, because they want to discontinue his daughters clothing or jewelry line or whatever it is. The President of the United States personally attacking a privately owned business on Twitter. Isn’t that exactly what the Republican party is against? Where’s the Republican outcry from this? Where’s the Republican outcry about wasted tax dollars because Donald Trump doesn’t want to be away from his home.

You won the White House, sorry you got to be there. Maybe every now and then you take a vacation back to your old place in New York or Mar-a-Lago or wherever the hell you want to go. The White House was the prize. Whether you like it or not, you won it. You’re not going to use that office to get rich. You’re going to use that office to protect the people. Now obviously you won’t do that. Given enough time, given enough mistakes by you, we’ll be able to replace you with somebody who will.