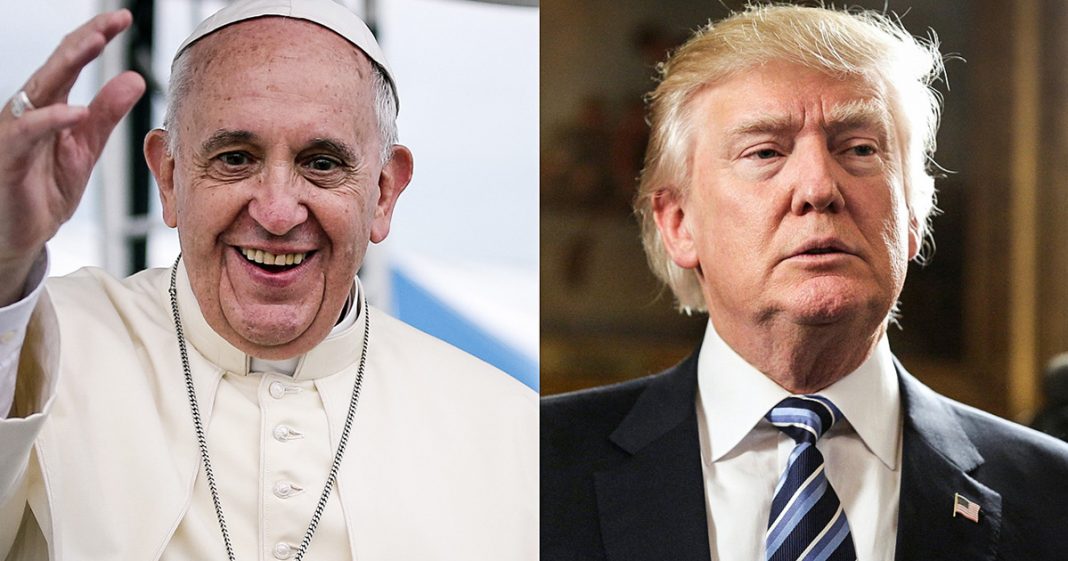 Pope Francis has once again gone after Donald Trump in a subtle way, saying recently in his weekly Vatican statement that people around the world should concentrate more on building bridges than building walls, and that people shouldn’t respond to evil with evil. Ring of Fire’s Farron Cousins discusses this.

In his weekly Vatican address, Pope Francis once again took a shot at Donald Trump’s xenophobic and racist policies. In this statement, Pope Francis said, and I quote, “A person who thinks only about building walls wherever they may be and not building bridges is not Christian.” Those were the words used by Pope Francis. “A person who thinks only about building walls and not about bridges is not a Christian.” That is about as forthright and angry, I guess, as a pope can be. Pope Francis is trying to tell not just Americans but the entire world that Donald Trump does not represent Christian values, and I know a lot of people obviously don’t subscribe to Christian values.

But what he’s really trying to say here is just basic humanity. Donald Trump is not a good person. That’s what Pope Francis is trying to tell us. Anyone who invokes these exclusionary policies, has an exclusionary way of life where they believe that one group of people is better than another group of people, they are not good people. They’re not good human beings and they’re certainly not good Christians if you happen to subscribe to that particular religion. But more importantly, Pope Francis has been coming out more and more in the last year speaking directly against Donald Trump and there’s no question that this quote, this statement that he made about building walls, was directed at Donald Trump, the man who literally campaigned on his desire to build a wall.

But that’s something that people in the United States need to understand. I think the rest of the world right now, I think they get it. They’re all laughing at us because we have President Donald Trump, but the people who voted for Donald Trump, especially the ones who claim to believe in God, who claim to follow Jesus, who claim to be Christians, you put in possibly the most unchristian human being from the United States. Christianity is not about building walls or persecuting other people for their religious beliefs, or bullying people. Christianity, at least New Testament Christianity, is about taking care of the less fortunate, maybe providing people with healthcare who don’t have healthcare, and hell, we all know that Jesus went around healing the sick according to the New Testament.

Do you think he charged them? Do you think they had to pay a co-pay? Do you think he said, “Oh, I’m sorry, you have a preexisting condition. I can’t go heal you?” That’s what Pope Francis is trying to say. Now, he’s obviously a little bit more reserved, a little bit more professional, a little bit more empathetic so he won’t say this but I will. Republicans in the United States do not have a heart. Republicans in the United States do not care about anyone other than themselves. Maybe they care about their kids if they have kids, doesn’t seem like it, though. That is at the root of what is making Pope Francis so angry. I don’t think it’s going to change. I think that the Republican party is what it is. I think they’ve grown into this heartless, disgusting, soulless monster that just hates.