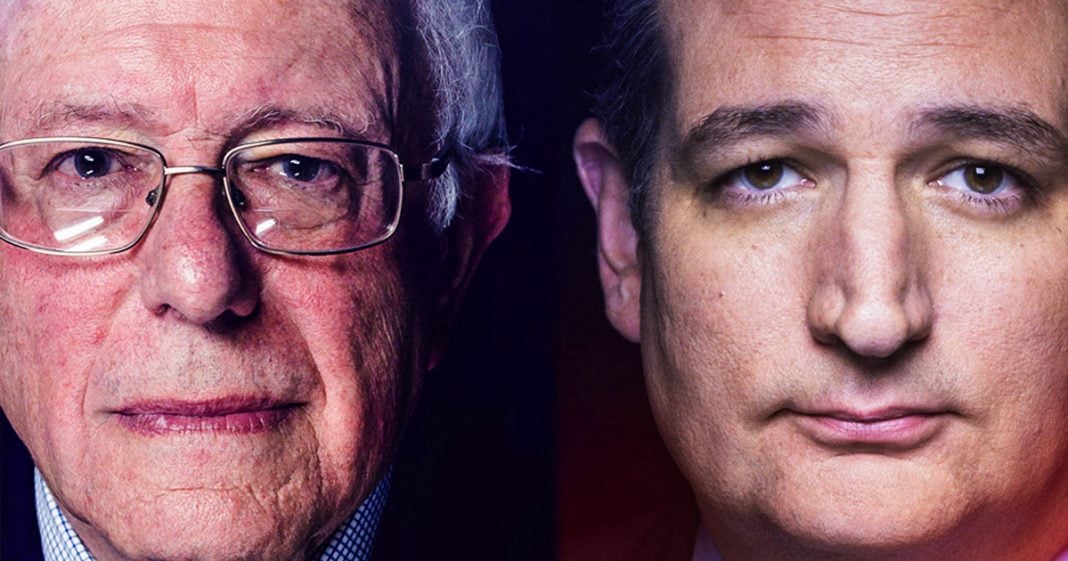 CNN hosted a townhall debate between Senators Bernie Sanders and Ted Cruz this week, focusing solely on the issue of the Affordable Care Act. While Cruz had all the Republican talking points memorized, Sanders hit him hard with facts, leaving Cruz puzzled and scared as he repeated the same bored lines over and over again. Ring of Fire’s Farron Cousins discusses this.

Last night CNN hosted a town hall debate between Senator Bernie Sanders and Senator Ted Cruz where the two of them debated the merits of keeping Obamacare or completely repealing Obamacare as Ted Cruz wants to do. Now, during the debate Ted Cruz made some points, most of which were not based anywhere near reality, or he cherry picked his data to kind of try to show that a universal health care option, a single-payer option, and even the Affordable Care Act, all of those are just horrible ideas.

On the other side Bernie Sanders came armed with facts and basic human decency. That’s what Bernie Sanders brought to that debate last night. When Ted Cruz was talking about the fact that we need a patient powered system, a system that empowers patients, Bernie Sanders mentioned the fact that more than 20 million Americans will lose their health insurance if Obamacare, the Affordable Care Act, is repealed. When Ted Cruz was paying lip service to his cronies in the health-insurance industry that have given him $2 million for his campaign Bernie Sanders was talking about the fact that even with the Affordable Care Act people still have trouble affording health care. They still can’t afford it. They have access, they just can’t pay for it.

That was a big theme last night was access. Ted Cruz kept bringing up the fact that we need access to doctors. We need access to health insurance. We need access to pharmaceuticals. As Bernie Sanders correctly pointed out, access exists. What doesn’t exist is a means for people to pay for it. Now, Ted Cruz talked about the fact that his father came into this country, started working as an immigrant, as a dishwasher for $.50 an hour, managed to get a better job, and then a better job, and then a better job to provide health insurance for his family, and that’s great for you Ted Cruz. Those opportunities do not exist in the United States anymore though unless you’re already born to a well-to-do family. Those opportunities don’t exist because of the job environment that Republicans, and some Democrats including Bill Clinton, helped to create inside the United States. Those jobs where you could make a solid middle-class income, get health insurance and all that, are gone, either shipped overseas or automated. They simply don’t exist anymore.

But Ted Cruz didn’t want to mention that. Ted Cruz also brought up a couple points like, ‘Oh, there was a woman in Australia where they have single-payer coverage. She died so obviously single-payer is a bad idea.’ His points that made no sense but one thing we saw was that this slimy little man is a good politician for Republicans. In fact, he represented last night everything that the Republican Party stands for; boring tried talking points that don’t mean anything, lying, trying to change the subject. Things like that are the hallmarks of the Republican Party during a debate but Cruz was slick, and the problem is that the Republican base will believe everything that this man said last night. That’s what makes him so dangerous. Ted Cruz is absolutely going to run for president again and to be honesty I think he’s got a very good shot at getting it because of the way he is able to manipulate his base with his words.

Now, to Bernie Sanders credit, again, he did a phenomenal job but I will say there were areas where I wish he would’ve gone a little bit harder on Ted Cruz. For example, when Ted Cruz claimed that the Affordable Care Act caused to 6 billion people to lose their health insurance plans that they liked, they had to go to other plans because of Obamacare. When Ted Cruz brought up the fact that insurance premiums were still going up. What Bernie Sanders should’ve replied to both of those statements with was that those were decisions made by insurance companies, the same insurance companies that fund your campaigns Ted. Those decisions were made in board rooms, not in Washington D.C. They were made by executives who want to make more money, not by President Obama. He didn’t raise your insurance premiums. Congress didn’t raise your insurance premiums. The insurance companies did that and Ted Cruz did not want to put any bit of the responsibility for the American health care crisis on to those insurance companies. He wanted to blame every single thing that’s wrong with healthcare in the United States on the federal government.

Another thing that we saw from Bernie Sanders last night, and this was probably his best quality, was that he got mad. He got fired up and he got passionate, and that’s not something that we really see from the Democrats in Washington D.C. anymore. Bernie Sanders obviously has gone back to being an independent, not running as a Democrat right now obviously, but his passion shows his concern for the American people. He’s not doing this to further his career. I mean he understands that at his age he doesn’t have much time left in his career before he retires. He is doing this to protect people. He’s doing this to give people what they deserve, and that is affordable access to good health care in the United States.

Ted Cruz at one point told us that the reason we pay so much more in the United States for healthcare and pharmaceuticals is because over here it’s just better, so we should just pay more money because it’s better. No Cruz, the reason we pay so damn much is because our government is not allowed to negotiate prices with the drug companies or the insurance companies like every other country in the world. We pay so much because we’re ass backwards when it comes to things like that, but you’re not going to tell your base that because as you pointed out you guys won several elections based on nothing more than bashing Obamacare, and your idiot base kept reelecting you because you said you were going to do it, even though you never did.

But now that you’ve got the votes you don’t know what to do. You’re running scared and your base is actually turning on you because as soon as they actually found out that the Affordable Care Act is Obamacare, that they’re the same things, because some for some reason those idiots didn’t know that, now they’re freaked out because they’re going to lose their health insurance. When that happens I want everyone to remember Ted Cruz is the guy, along with the rest of the Republicans but right now apparently Ted Cruz is the face of it. They’re the ones who took away your health insurance.