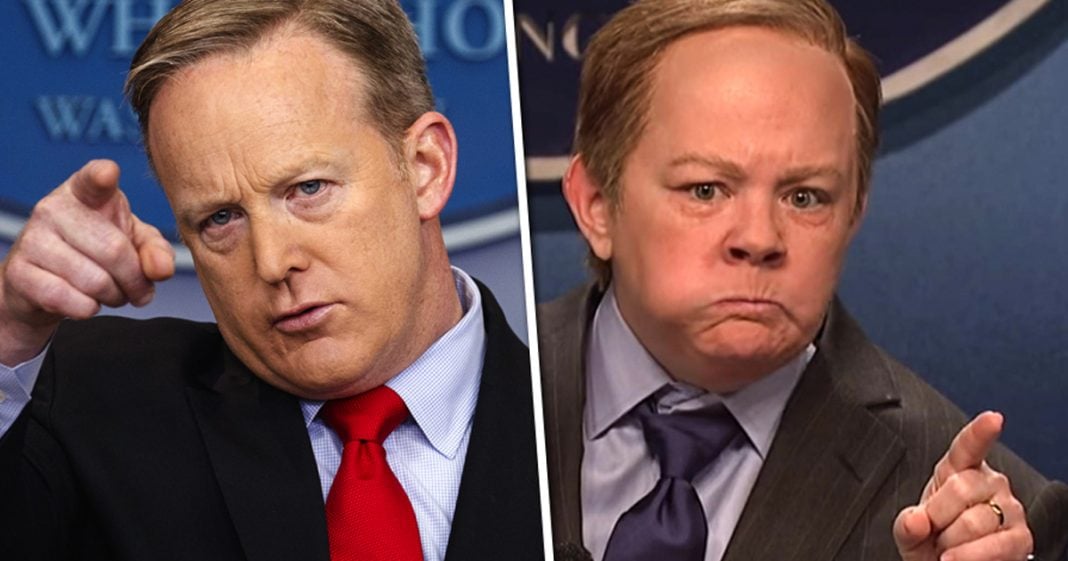 Donald Trump has made it clear that he hates Saturday Night Live due to Alec Baldwin’s portrayal of him on the show, but when Melissa McCarthy impersonated Sean Spicer in an SNL skit this past weekend, the White House apparently lost their mind. Not because it portrayed Spicer as erratic and buffoonish, but because he was parodied by a woman. Ring of Fire’s Farron Cousins discusses this.

In case you missed Saturday Night Live from this past weekend, Melissa McCarthy did a phenomenal spoof of Sean Spicer in which she appeared very belligerent. She made up facts, and was just overall over the top with her performance. Now, we all know that Donald Trump doesn’t like people making fun of him or anyone in his administration, so obviously, this spoof did not go over very well with the White House. According to sources within the White House, they are freaking out over Melissa McCarthy’s portrayal of Sean Spicer, not because it was so accurate, not because he was just so belligerent and goofy, but because Saturday Night Live had a woman portray Sean Spicer. That is the fact that is not going over very well with the Trump administration. It makes Sean Spicer appear more weak, according to sources within the White House, and that’s something that Donald Trump simply will not tolerate.

Here’s the thing that Donald Trump and the entire White House needs to understand. Comedy is comedy. It doesn’t matter if it’s a man portraying a woman or a woman portraying a man, funny is funny. You use the tools that you have available. Melissa McCarthy is a great actress, a great comedian, so she was the one picked to make fun of Sean Spicer because she pulled it off. That’s basic entertainment business right there. Donald Trump should know. He’s in the entertainment business. Furthermore, that’s what a parody spoof skit variety show does. They make fun of people and current events. That’s what Saturday Night Live has always been, but Donald Trump and his entire administration are so thin-skinned that they can’t take the ridicule.

Again, if you haven’t seen this skit, please go watch it. It is available widely online. It is probably the funniest thing I have ever seen on Saturday Night Live, but for the White House to freak out over this, to freak out over a woman portraying Sean Spicer, it’s only going to add fuel to the fire for Saturday Night Live. If you don’t like it, if it bothers you, say nothing because you’re only giving them more ammo to make even more fun of you in the future. I’m willing to bet that this coming weekend, we’re going to see something even more over the top, perhaps maybe have a woman portraying Donald Trump just to get under his skin because that’s what this White House has allowed everyone to do. We know what makes you tick. We know what makes you ticked off, and we can use that to manipulate you in ways that you can’t even imagine.

Donald Trump is allowing this television show, a comedy show, to play right into all of his own insecurities, and that’s probably the only positive that’s going to come out of this Trump administration.