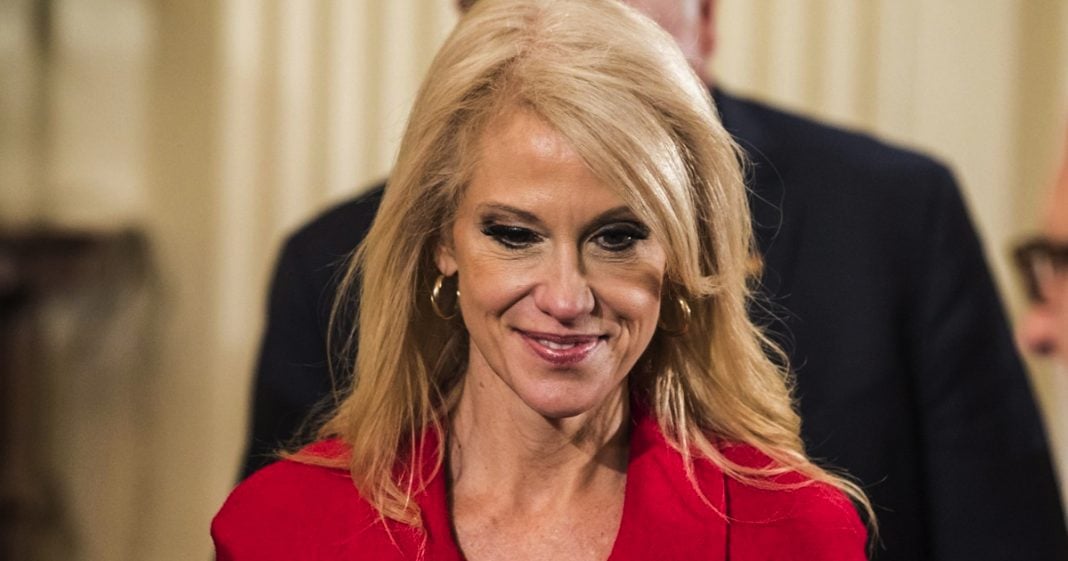 After apparently inventing the Bowling Green Massacre during an MSNBC interview last week, Kellyanne Conway claims that the whole issue arose because she misspoke a single word. But it turns out that this was just another lie, and she had mentioned the phony terrorist attack at least twice to national media outlets before her embarrassing appearance on MSNBC. Ring of Fire’s Farron Cousins discusses this.

Last week when Kellyanne Conway appeared on MSNBC with Chris Matthews and invented the entire Bowling Green Massacre she later said after the interview that the whole reason, she misspoke one word. That’s how she described that as explaining her lie away, by saying she simply misspoke one word. Now I guess we’re left to determine what that one word was.

Here’s the thing, Kellyanne Conway actually lied about the lie. It turns out she didn’t misspeak. She meant exactly what she said because Cosmo has now released an interview with Kellyanne Conway that was done several days before the MSNBC interview where she once again, or I guess originally created the entire Bowling Green Massacre lie. She said the same thing to Cosmo that she said on MSNBC a few days later.

As if that isn’t bad enough, shortly after that Cosmo interview but before the MSNBC interview she spoke to TMZ where she repeated the Bowling Green Massacre Terrorist Attack lie that she completely invented in her head. Twice before her appearance on MSNBC she made up this lie. Then after she gets busted on MSNBC she makes up another lie to cover up that lie, forgetting she’d already lied about it twice to news organizations that either have it on video or audio or on paper.

This woman is so crazy delusional that it makes you wonder how she’s even still involved in the Trump Administration. Everyone is mocking this woman because she can’t tell the truth. It’s not that she doesn’t want to tell the truth. I honestly believe at this point she is physically incapable of saying anything that is accurate. She lives in an alternate reality where alt facts rule. It’s alt facts and alt right. That is Kellyanne Conway.

Why is Trump keeping her around? We know that he can’t stand people that get ridiculed. We know that he can’t stand people who can’t stand up for themselves, and that’s what’s happening with Kellyanne Conway. I will say this whole thing is absolutely hilarious, because in today’s digital age you can’t just make something up on National television. We have the internet. We have books. We can look things up and verify. Kellyanne Conway and even Donald Trump don’t seem to understand that, especially when you consider the fact that now we have news outlets like Cosmopolitan and TMZ having to get into the political realm to say, ‘hey, you’re lying about things.’

Teen Vogue has been phenomenal in coverage of the Trump Administration. Why are these vanity news outlets suddenly becoming more credible and better at their jobs than outlets like MSNBC? That is even crazier than the things that come out of Kellyanne Conway’s mouth. That’s why CNN refused to even let her come back on the network. Speaking of Kellyanne Conway lies, when CNN last week wanted Mike Pence, White House offered Kellyanne Conway. They said thanks, but no thanks. She has a very real problem with being honest. Kellyanne Conway then said no, she’s the one who declined the CNN interview, to which CNN had to come out and publicly say that’s not true. We told you we didn’t want you on our network.

Kellyanne Conway is immune to the truth. She is immune to reality. Luckily for the entire planet we have plenty of news organizations out there that do understand the truth, that understand reality, and even better, they have it on video.