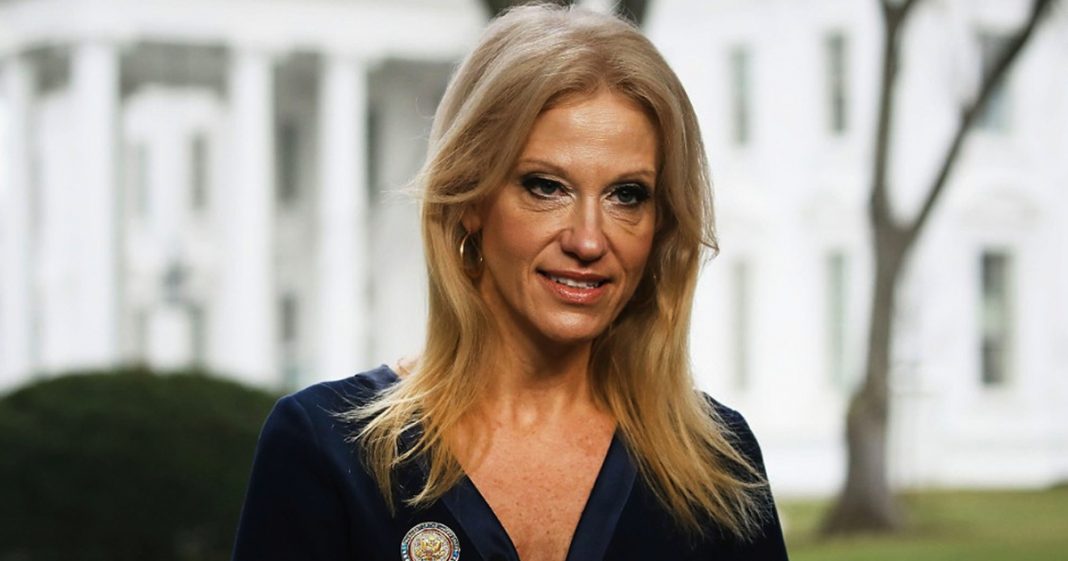 Last week, the White House said that no staff members were to go on CNN because they were too mean to Trump. But just a few days later, the White House offered CNN the chance to interview Kellyanne Conway, to which the network very quickly declined. It turns out you can’t insult a media outlet incessantly and still have them do your bidding. Ring of Fire’s Farron Cousins discusses this.

Last week, the White House announced that no members of the staff, no advisors, not the President nor the Vice President himself are going to appear on the CNN network anymore because that network is just too darn mean to Donald Trump. Well, less than a week later, CNN puts in a request for Mike Pence. White House says, ‘You know what? You can’t have Pence, but we’ll give you Kellyanne Conway. We’re going to resend our order, let Kellyanne Conway come on your network,’ to which CNN replied, ‘Ha, hell no.’ CNN told the White House, ‘We do not want Kellyanne Conway coming on our network.’ A complete reversal from what happened just a week ago. A week ago, it was the White House saying we weren’t going to entertain CNN. We weren’t going to give you our people. Now, the tables have turned. CNN is telling the White House we don’t want your people. We wanted to speak to the Vice President and find out what the hell’s going on in his deranged little mind and you offer us probably the craziest person from your entire administration, a woman so crazy that she literally invented a terrorist attack on MSNBC earlier last week.

Kudos to CNN for actually standing up for yourself because you could have gone for it. You could have gotten the ratings of having Kellyanne Conway on your Sunday morning shows. You could have had her say something completely ridiculous that would have made the headlines, created a lot of click bait online, but you choose to go the high ground. You choose to not have her on your network to stand up against this administration that increasingly sees the media as the enemy. CNN is a perfect example of what happens when you treat the media as your enemy. They do, in fact, become your enemy. We have an administration right now that is worse than hostile to the United States press. They want to hide information from the press. They want to ban the press from press briefings.

They want to bring in news organizations, phony news organizations I should say, like Breitbart and elevate those while delegitimizing actual news organizations. CNN obviously not the best network out there. It’s just as bad as the others ones. They’re all about sensationalistic headlines. They’re the ones who really help to promote the Iraq War, but they, during this Trump administration, have emerged as the corporate news resistance against Donald Trump. Can they keep it up? Probably not. The only reason they’re probably doing it is because this feud is good for their ratings. But ratings or not, the fact is they’re at least doing it.

MSNBC, with Morning Joe, you don’t know one day to the next, maybe he’s going to praise Trump today, maybe he’s going to attack him, but he likes to play both sides of the fence there. Plus Trump and Mika both attended Donald Trump’s New Years Eve party down in South Florida, so it’s unlikely you’re going to get any real hard criticism of Donald Trump from that network. Meanwhile, the rest of the hosts on MSNBC are still too busy being pissy about the fact that Hillary Clinton lost. They refuse to move on. Fox News obviously squarely in the pocket of Donald Trump. They’re the ones who gave him his very first political microphone. They created him, so he’s, of course, going to give them favor. But CNN, CNN is providing a little bit of resistance, a little bit of pushback against this administration and that makes them, right now, one of the most valuable news organizations. I’m not saying you need to go turn on your TV and watch CNN, but I am saying that in this particular instance we have to give them credit for doing the right thing and pushing back against the Trump administration.