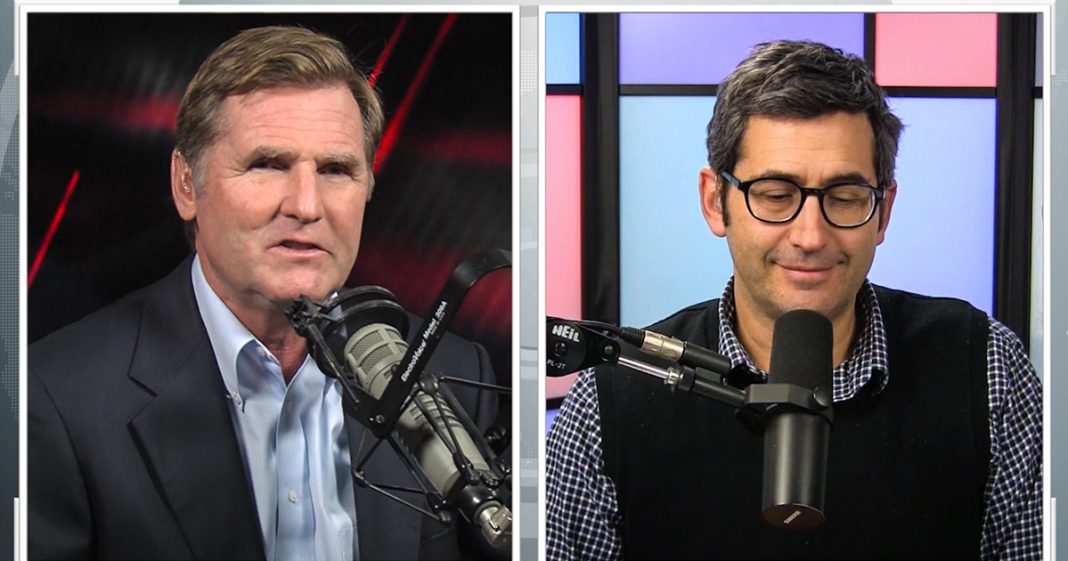 Ring of Fire’s Mike Papantonio & Sam Seder discuss past legislation that could help keep Donald Trump out of hot water with his Muslim Ban.

Sam: Pap, when we broke, you had made the argument that under a 1952 statute, and I guess then amended by a court ruling or statute in 1990, that Donald Trump was not quite there in terms of being unconstitutional in the application of this executive order, but that he could be in danger of it. Let me ask you about this aspect. We have these seven countries. They’re majority Muslim countries. Some people are making the argument that if this was a Muslim ban you would see it applied to all countries with Muslims. If this was discriminatory towards Muslims, you would see that everywhere, but we don’t hear that frame of argument when we talk about disenfranchising black people when they go into vote. The courts have found many times that voting restrictions have been set up to depress black vote and suppress black vote. That doesn’t mean that they have to suppress every single black vote, right?

Pap: No. I’m going to make an early call. I love doing this. The early call is that Trump is going to prevail on this in some form or fashion. What’s going to happen, Sam, is you’re going to have courts probably in the fifth circuit, Texas, Louisiana. The circuit court is ultimately going to get it. They’re going to rule that what Trump has done is completely fine. You’re going to have a court in Boston. That’s circuit is going to rule, no, it’s not. They’re going to get an emergency hearing up to the United States. If they do that too quickly, if that happens too quickly, they’re actually causing harm to what they’re trying to accomplish because they will not win on race. They will not win on race and religion as it is right now because right now his argument is very clear. It’s a stop gap measure. It’s extraordinary, yes. It’s discretionary, absolutely. It’s a stop gap measure simply to continue looking at this thing that he wants to call extreme vetting. It’s going to be an incomplete case at that point, incomplete file.

What the next stage is going to be is it’s going to have to be the test. The test is the way that this took place and what happened afterwards. Is it clearly discriminatory against race and religion? Even if it is, you need to understand even if it is, somebody has to say that they did this without showing any overt action on the people that they kept out. You’re not going to have the Homeland Security do that. They’re going to come up with some subjective reason why there’s some overt act that this individual or that individual engaged in. It may be as simple as connecting on a computer. They’re going to say that reaches the standard for the 1990 test, and that’s where the argument is going to take place.

Sam, it’s one of these things. It’s an epidemic within the media right now. The first thing, I tried to read Huffington Post. God almighty, I almost can’t read it any more. It’s like a bunch of college sophomores are writing for them now. As you look at it, it’s all fear and loathing. It’s all these extreme statements. Race and religion, it’s going to fall without any analysis. I think on something like this we have to analyze it, if we want to really protect ourselves rather than fools rushing in and saying with this wide swath, ‘This is not going …’ The guy can prevail here, man. I’m telling you, he can prevail unless it’s done properly.

Sam: To what extent is there in the creation of this, picking out of these seven countries … To what extent is something like Rudy Guiliani saying that this would start it off as a Muslim ban, and they wanted to try to fit it into a legal framework? To what extent does that aspect or does Donald Trump going onto the Christian Broadcast Network a couple days before the release of the ban saying, ‘We’re going to make it easier for Christians even from these countries to come in?’

Pap: Your point is intent. Does the intent behind the action, the executive action, is that relevant? Absolutely, it’s relevant. That’s one of the factors that the court takes in place, into hand. There’s another thing people are totally missing. A character in Syria has no constitutional rights in the United States unless they’re US citizens. They don’t get the advantage of-

Pap: They cannot do that, but what I’m trying to say, that’s got to apply to people that are US citizens. That’s where the test is. Here’s the point I’m trying to make. The point is that this right now to argue that this is all going to fail, that Trump’s effort is all going to fail based on race and religion is completely a fraudulent argument. To rely on 1965, the Immigration Nationality Act of 1965 is a mistake. For Trump to uniquely rely on 1952, legislation in 1952 without going further in saying that legislation of 1999 has got to be considered, he’s going to fail. You’ve got most of the people talking about this right now. They don’t even talk about legislation. They just talk about these massive swaths of concept which is race and religion. They don’t understand there’s a test. There’s a balancing test, and everything comes into effect in that balancing test.