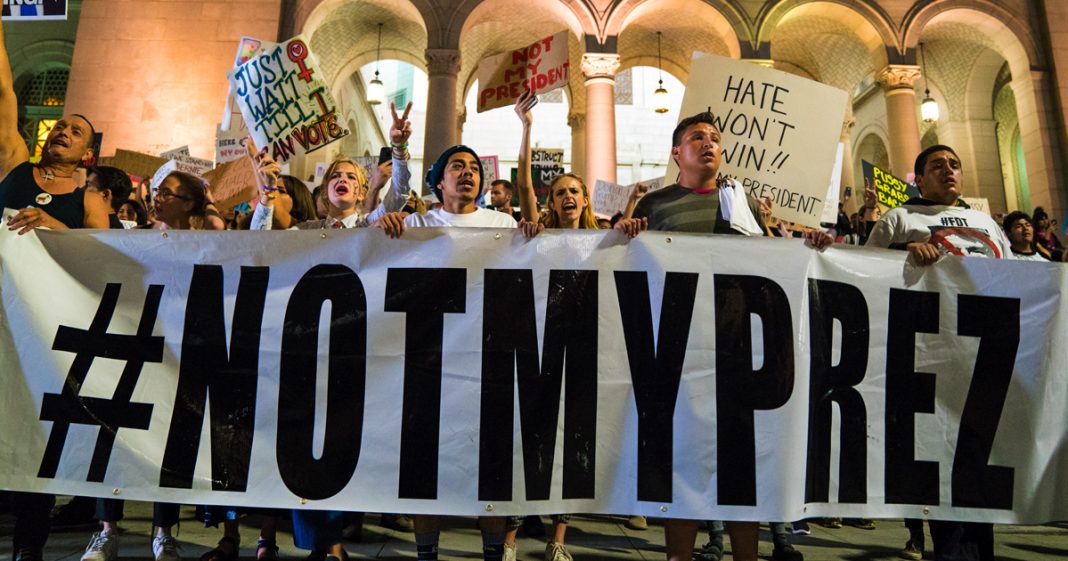 Donald Trump has lived his entire life inside of a millionaire’s (billionaire’s?) bubble, never having to endure anything that he didn’t like. But now that he’s outside of that bubble and in the real world, suddenly the world seems scary and mean. He cries about “fake news” and negative polls, but that’s just reality, Donald, and you’d better get used to it. Ring of Fire’s Farron Cousins discusses this.

Early Monday morning Donald Trump took to Twitter as usual to say that all of these polls, ABC, CNN, NBC, CBS, all of the polls right now showing that he has historically high negative approval ratings are fake news. He called these polls fake news because he doesn’t agree with them. He said they did the same thing about the presidential election, ignoring the fact that Hillary Clinton actually did win the popular vote by as many votes as she was projected to win the popular vote. He may have won the presidency, but those presidential polls for November were actually accurate. Don’t tell him he lost the popular vote, god no.

His insistence that these negative polls, showing that people do not like the job that he’s doing, insisting that those are fake news shows that Donald Trump is incapable of living outside of his bubble. Think about it this way, this is a man who was born a millionaire. The second he came out of the womb he was a millionaire. Right now according to him, he is a billionaire. He has never been anything less than a millionaire from the second he took his first breath. He has lived his entire life inside of a bubble where if anything was uncomfortable, anything was unpleasant, anything wasn’t up to his standards he could get rid of it.

That’s literally what made him famous on his TV show, was getting rid of things he didn’t like, only in that case it was people or employees. If he had a painting in his house that he didn’t like he would just tell somebody, ‘I don’t like this. Get it out’, and they’d do it like that. ‘I don’t like this food, bring me something else’, and they would. That’s what a life of privilege does to you. It insulates you from reality. He surrounded himself with these sycophants and yes men who don’t know how to say no, who don’t know how to stand up to him, people who would just say, ‘yes sir, absolutely sure. We’ll make sure we get that taken care for you, sir.’, instead of saying ‘You know what, just deal with it. Let it go. Accept it. That’s reality.’

That’s the problem he has right now, because to an extent right now Donald Trump has to live outside of his bubble. There are going to be opinion polls about his presidency until he leaves office. Even after that people will still get polled five, ten years from now ‘What do you think of the job that former President Donald Trump did?’. That’s your life now, buddy. That’s what you chose. Get used to it and get over it. It doesn’t mean they’re fake news just because you don’t like the reality. You’re just mad that you can’t have somebody bring you a new more positive poll to replace this negative one.

That’s reality. That’s the reality that the rest of us have been living in all of our lives. We didn’t come from lives of privilege, we weren’t born millionaires, probably never will become anything close to millionaires. We understand, we see the world for what it is. We understand science. We understand polls. We understand news. We understand what’s fake news and what’s not. The only fake news in America right now is coming from far right websites and Kellyanne Conway and Sean Spicer with their alternative facts, and I guess to an extent Donald Trump’s Twitter feed as well. That’s reality, buddy, and you have to accept it. You’re the President of the United States. You don’t get to make up your own facts. You don’t get to fire people across this country that you don’t like. You are what you are now, and you chose this, so you’d better get used to living outside of your cushy little bubble because I can promise you things aren’t going to get any prettier or kinder for you in the next four years.