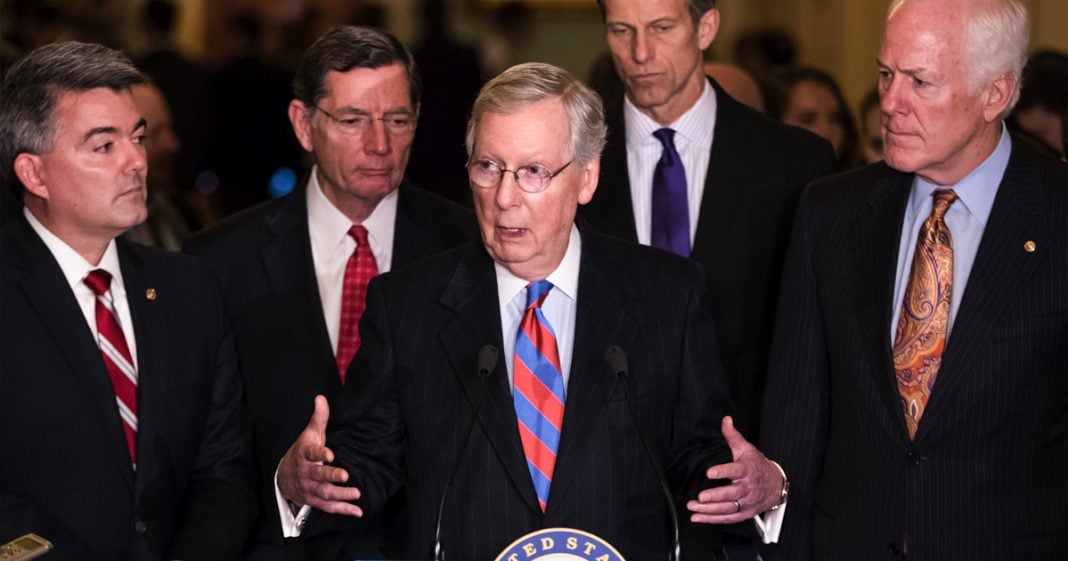 Whether it is packing the federal court system with right wing corporate hacks, or passing legislation that allows the mentally ill to get access to deadly weapons, Republicans in the House and Senate are playing right along with Donald Trump’s far right agenda, at times inflicting more damage on our country than even Trump himself. Ring of Fire’s Farron Cousins discusses this.

During Barack Obama’s presidency, it was Mitch McConnell in the Senate and John Boehner in the House, and later Paul Ryan, who provided the backbone of GOP obstruction during the Obama years. Now that Obama’s out of office — they have a pseudo Republican in the White House — McConnell and Paul Ryan are working overtime to dismantle America. Here’s the sick part. They’re doing it with almost no scrutiny at the moment.

Think about this. Every time Donald Trump tweets something, every time he says something, every time he goes somewhere, it grabs all of the headlines. Go to any news site right now, including progressive news sites, and you’re going to see just nothing but headlines about stupid and horrible and dangerous things that Donald Trump has done. Yes, he deserves the attention. However, all of that attention being focused on Donald Trump is allowing Republicans in the House and the Senate to dismantle American democracy while nobody is paying attention.

Just last week, House passes rules that allows the mentally ill to get their hands on deadly firearms. They revoke some of President Obama’s clean air rules for coal mines. They did a whole slew of anti-consumer, pro-corporate legislation late last Thursday, and almost nobody talked about it.
Meanwhile, in the Senate, Mitch McConnell is attempting to push through Gorsuch, Donald Trump’s Supreme Court nominee, after one full year of blocking Judge Merrick Garland, President Obama’s appointee. More importantly, Mitch McConnell has also said this past weekend that he is going to make damn sure that they fill the 114 federal judicial vacancies all over this country.

We’re so consumed with what Donald Trump is doing that we’re not paying attention to the fact that Paul Ryan is attempting to dismantle Medicare and Social Security. That is happening in the U.S. House of Representatives this week, but nobody talks about it. We’ve got a psychopath in the White House, and attention has to be paid to him, but we have to give equal attention to the dangerous, evil, not-quite-as-stupid-as-Trump Republicans in the House and Senate.

At the end of the day, there’s a good chance that maybe in a year Donald Trump won’t be in that White House anymore, but those Republicans will still be in their positions of power in the House and Senate at least until 2018. They’re the ones who can do more damage to this country. Trump’s going to screw up. He’s going to screw things up so bad that they’re not going to have a choice but to impeach him, and that is what they want.

Think about it. Donald Trump is a guy that House and Senate Republicans cannot control. He’s gone after them. Mike Pence, good buddy of the Koch brothers, that’s exactly the kind of guy that Republicans want in the White House because they can manipulate the hell out of him.

All this talk right now about John McCain emerging as, ‘Maybe he’s not such a bad guy. He’s standing up to Donald Trump,’ keep in mind this is a guy who sang a song during the 2008 presidential campaign about bombing Iran. He’s already ready to go to war with Russia right now based on flimsy evidence. He will go to war with anybody anytime anywhere. You just give him the time and place. He will show up there. That is John McCain, a war-hungry maniac.