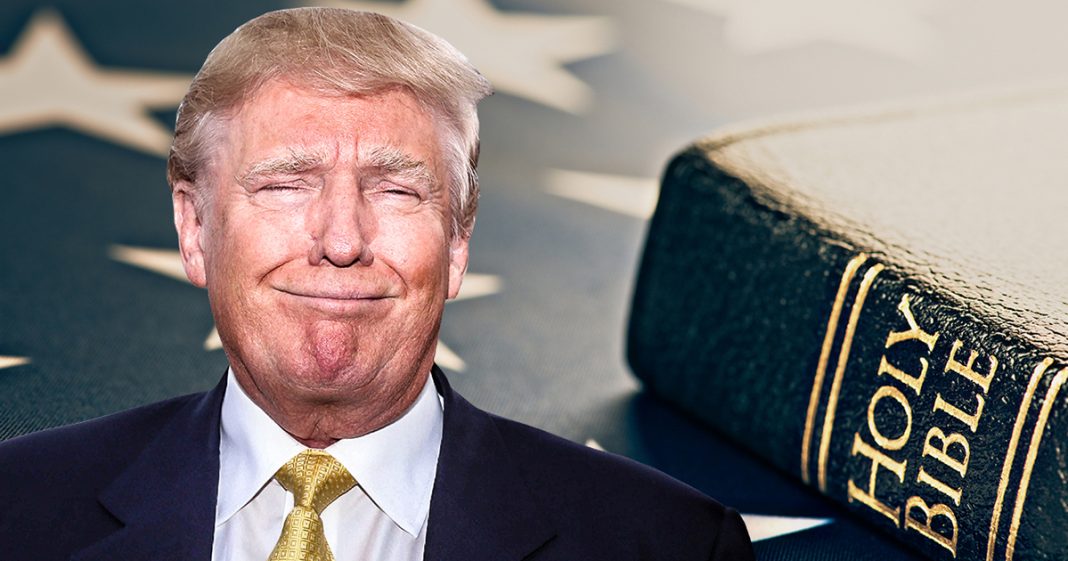 Donald Trump is ready to take another swipe at the Separation of Church and State by stating his desire to dismantle a 1954 law that expressly forbids religious leaders from preaching from the pulpit. Ring of Fire’s Farron Cousins discusses this.

During this past week’s National Prayer Breakfast, Donald Trump told the assembled crowd that he wants to do away with the Johnson Amendment. For anyone not familiar with the Johnson Amendment, it is a 1954 law that specifically says that preachers, pastors, priests, what have you, religious leaders in a church cannot preach politics from the pulpit. Donald Trump told this gathering of religious leaders that he’s going to do away with that. Essentially, he’s going to do away with the separation of church and state.

Because right now religious institutions are not taxed, and that is part of the deal. We don’t tax you; you don’t talk politics. That’s usually how it works in America, right? We give you the freedom to do whatever you want with your religion. We don’t require you to pay any money. All that we ask is that, since you’re not funding the government, keep it out of your sermons. Sounds fair.

Now don’t confuse this. Donald Trump is not a religious man. There is nothing godly about him. There is nothing that Donald Trump has done in his life that reflects anything the Bible says that Jesus Christ did in his life, but the religious right doesn’t care. All they see is a Republican, a man who’s going to stand up against homosexuals and abortion. Because those are the only two issues that matter to right wing crazy conservative evangelicals. Those are the only two issues that these people actually get out and vote for or against. Completely against the teachings in the New Testament. Completely against anything Jesus Christ ever is said to have done. But they don’t care, because these are fake religious people. We all know the type. You talk a big game, you show up on Sunday morning, and then behind closed doors you’re one of the most bigoted, racist, hate-filled, anti-people person that you could imagine.

Because you don’t care about helping other people, and neither does Donald Trump. What he’s doing right now is pandering to the evangelical right. He’s already shoring up his support for the 2020 reelection that he’s going to be facing, and he knows that he’s already historically unpopular for a president that’s just taken office. So he’s trying to shore up that base, and he’s doing it at the expense of the US Constitution.