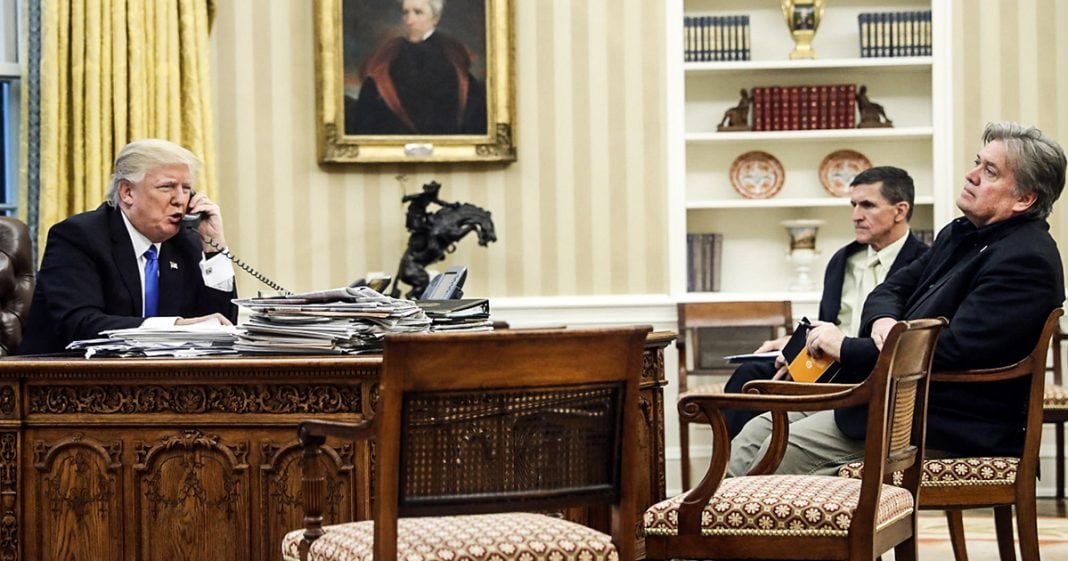 Donald Trump still believes that there is a massive voter fraud problem in this country, specifically calling out people who are registered in multiple states.  But before he starts a needless investigation, he may want to look in his own cabinet first. Ring of Fire’s Farron Cousins discusses this.

Donald Trump is still on his crusade to prove that it millions, and millions of illegal aliens voting in the 2016 election that actually cost him the popular vote to Hillary Clinton. He insists that we’re still going to have this investigation, we’re going to find so much voter fraud it’s going to make your head spin. And in Donald Trump’s broad definition of voter fraud he has said that anyone who is registered to vote in two separate states is guilty of voter fraud.

So that’s why the republican party is being silent about this. But for Donald Trump this really has nothing to do with voter fraud. For the next four years, or at least until Trump is removed from office, we’re going to hear about this nonstop. It doesn’t matter what Trump’s investigation comes back with. If it comes back and says that we found absolutely no instances of voter fraud he’s still going to claim that it exists. Why? Because losing the popular vote to Hillary Clinton hurt his feelings. It hurt his fragile little ego.

This issue is not going away. It is one that Donald Trump made up to convince himself that people really do like him. That he’s not such a horrible person, and that he would have won if it wouldn’t have been for you gosh darn kids. That’s what this is about for Trump, and that’s pathetic, but for the GOP it’s dangerous. Because this will be the rallying cry that they use to enact sweeping voter restrictions across this country. Just like we’ve seen in states like Florida, and Ohio, and Pennsylvania, swing states with large electoral populations, they’re going to start using it to purge people from the voting rolls.

Maybe your name is the same as someone who’s passed away. Well guess what? They’ll take you off the voting roll. We’ve seen it happen. Maybe your name, John Smith, happens to be the same name as somebody who’s in prison, John Smith. Well guess what? You’re both kicked off the voting roll because we think you’re the same person, we’re just not going to take the time to verify it. That’s how voter purges work. They don’t take the time to verify anything.

You may live in completely separate areas of the state, 400 miles apart. If you have the same name, you’re gone. And republicans are going to use Donald Trump’s bogus claim of voter fraud to do that to an even greater degree than they do it now. They’re going to use it to enact even more restrictive voting laws. It’ll go beyond photo ID. Maybe next time, maybe in 2018, 2020, you have to show up and not only show an ID but show a birth certificate. Guess what? If you’ve gotten married and changed your name, or just had a name change in general, if it doesn’t match what’s on that birth certificate to your ID you can’t vote. That’s the future of the United States under Donald Trump, and that’s the future that the republican party wants to create for all of us.