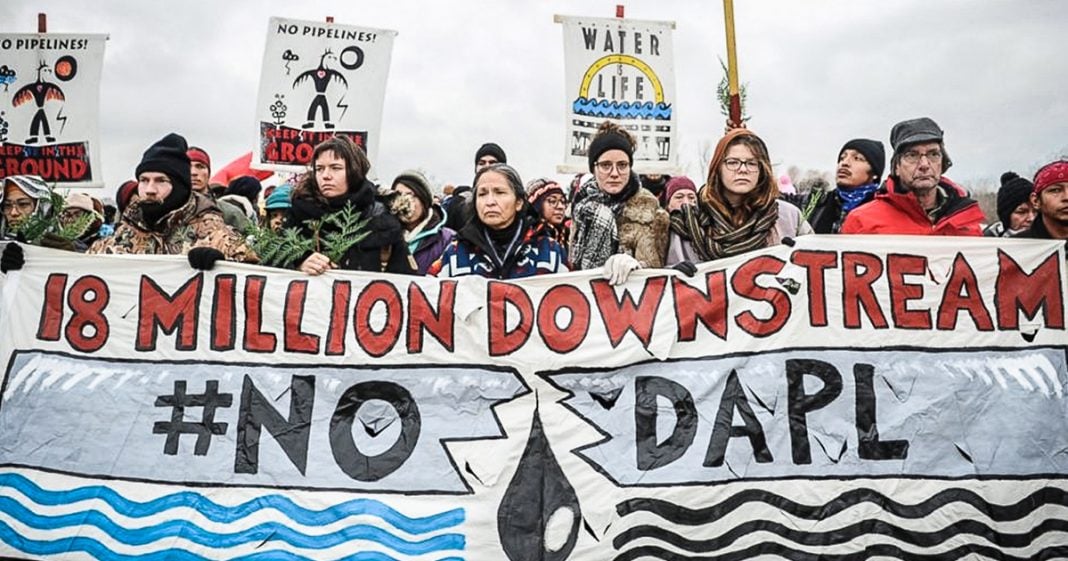 The major banks that are funding the disastrous Dakota Access Pipeline finally decided to meet with the Standing Rock Sioux after ignoring their requests for over a month.  But will these bankers learn anything, or will they continue to be governed by their own greed? Ring of Fire’s Farron Cousins discusses this.

Representatives from seven US banks that are currently funding the Dakota Access Pipeline have agreed to meet with Stand Rock Sioux members in order to talk to them, get their side of the story and maybe, just maybe, stop funding this disaster of a pipeline. Now, a lot of people right now see this story and they think, “Look, nothing is going to happen. These bankers are just doing this for show. They’re not going to give into the demands of the Standing Rock Sioux.” However, it’s important to remember several years ago PNC Bank was funding coal companies involved in mountaintop-removal mining. After a massive public backlash, after people began withdrawing their bank accounts, closing their bank accounts with PNC, the company finally decided that they were going to stop funding this disastrous mountaintop-removal project.

Right now, 52 million dollars has been pulled out of these banks that are currently funding the Dakota Access Pipeline. They may not respond to protests, they may respond to the members of the Standing Rock Sioux tribe, but what they are responding to, as we’ve seen in the past, is money; because they’re banks, that’s all they know. They don’t care about people. They don’t care if they’re funding a project that’s not only going to destroy sacred Sioux grounds but also poison the environment and millions of people. They don’t care about that, but they do care about your money; because that’s all they know. These greedy bankers understand money and that’s it. They don’t understand human suffering. They understand right from wrong anymore. All they know is profit and loss.

That’s why it is great they are going to meet with the Sioux, but I promise you they are only doing that for the public. What we can still continue to do is pull our money out of these banks. Tell them, “You are not going to get my business. You are not going to hold my account. You are not going to hold my money to go fund this disaster of a pipeline.” There’s plenty of banks in this country, folks. Maybe it’s not the one you want to be with, but wouldn’t you rather sleep easy at night knowing that your money is with a company that is not out there destroying the environment? Wouldn’t you feel better knowing that your money was in a bank that wasn’t trying to destroy a Native American tribe that has been here since before the colonies?

Sometimes you have to act. Sometimes you have to do things you don’t want to do. Sometimes you have to close that bank account and move to one, maybe it’s a little bit more inconvenient, but nothing can compare to what these banks are funding, this disaster of a pipeline that, again, could potentially poison millions of Americans and more importantly, is destroying what’s left of a Native American tribe. Taking away the few lands that they have left, that we had all ready taking from them to begin with. The least we could do is close our bank accounts and stop supporting these companies that are funding the Dakota Access Pipeline.