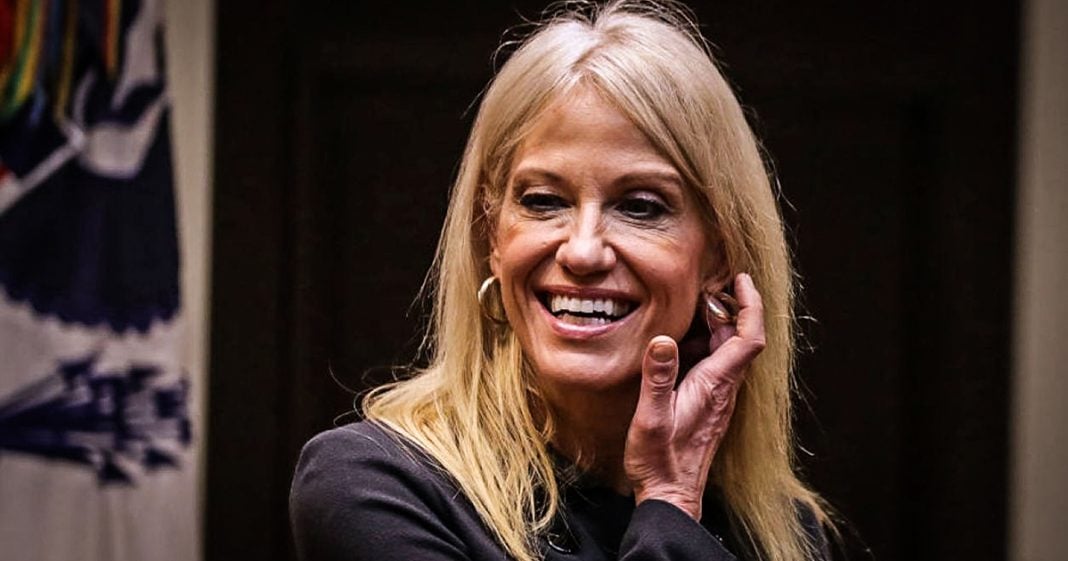 During an appearance with MSNBC’s Chris Matthews, Trump advisor Kellyanne Conway literally made up a terrorist attack in order to justify the President’s Muslim ban.  She claims that refugees from Iraq carried out an attack in Bowling Green, Kentucky, but the media wouldn’t talk about it because it would have hurt Obama.  No attacks ever occurred. Ring of Fire’s Farron Cousins discusses this.

On Thursday evening, Trump advisor, Kellyanne Conway went on MSNBC, to speak to Chris Matthews, to defend Donald Trump’s Muslim ban. During this interview, Kellyanne Conway pulled out a piece of evidence to prove that we need some kind of ban on Muslims coming into the United States. The specific piece of evidence she used was in regards to a 2011 terrorist attack in Bowling Green, Kentucky that was carried out by two Iraqi refugees.

If you haven’t heard of this terror attack, it’s okay. That’s common, because apparently it never happened. Kellyanne Conway went on MSNBC and completely made up a terrorist attack in the United States to justify Donald Trump’s Muslim ban. This isn’t even alternative facts. This is alternative reality. She flat out lied on national television about something that’s very easily verifiable.

According to Vox.com, what Kellyanne Conway might have been trying to refer to is the fact that two Iraqi refugees were arrested in Bowling Green, Kentucky on terrorism related charges because, allegedly, they were plotting to send money and weapons back to Iraq. A plot that was never officially carried out.

But in Kellyanne Conway’s mind, that somehow warped into two Iraqi refugees, both Muslim, who killed American citizens in the United States, and, according to Kellyanne Conway, the mainstream media just choose to not report about this and that’s why people don’t know about it. Not because it’s fake, but because the corporate media didn’t talk about it.

I know we’re living in an alt-fact world right now, but that doesn’t give anyone within the Trump administration the privilege of going out and absolutely lying to the American public. It also shows you how desperate they are to defend this racist, bigoted Muslim ban, that they have to make up facts to support their Muslim ban, ignoring completely the fact that earlier this week, up in Canada, six Muslims were killed in a hate inspired terrorist attack, carried out, not by a Muslim, but against Muslims. That’s the real persecution happening here in North America right now.

But any of that is beside the point, you cannot persecute someone in the United States based on their religion. That’s what Kellyanne Conway is trying to do. That’s what Donald Trump is trying to do, and that’s why they’re literally inventing, out of thin air, fake terrorist attacks to scare American citizens.

The worst part about all this is the Trump supporters are going to believe that it happened. I guarantee you, right now, you probably have Breitbart.com and Fox News out there trying to piece together something that will make it look like there actually was a terrorist attack in Bowling Green, Kentucky.

You could do the easy thing. You can check police records. You can check the death records. You could check local newspapers because they would probably have to report on something about that, and you’re not going to find a damn thing, because Kellyanne Conway is nothing but a paid liar for the Donald Trump administration.