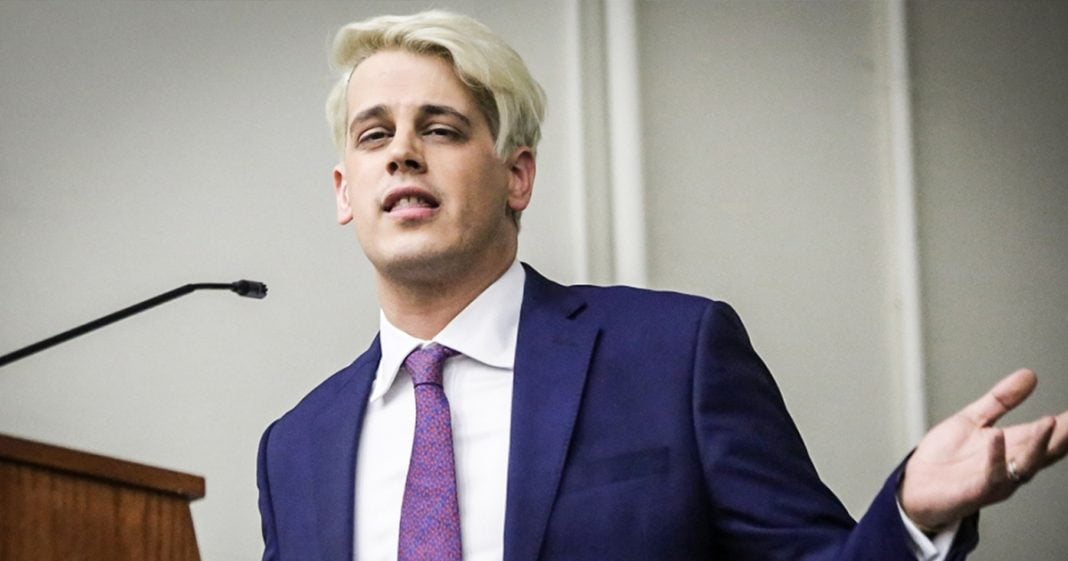 Milo Yiannopoulos, right wing hatemonger from Breitbart, was scheduled to speak at UC Berkeley at an event sponsored by the UC Berkeley Republicans.  The event was cancelled after thousands of protestors showed up, after which Donald Trump threatened to pull the federal funding from Berkeley for allegedly violating the First Amendment. Ring of Fire’s Farron Cousins discusses this.

Earlier this week the University of California, Berkeley, was forced to cancel an appearance by right-winged Breitbart hate monger, Milo Yiannopoulos. Apologies if I’m pronouncing your name wrong. Honest to god, I don’t care. Anyway, Milo went there to give a speech sponsored by the college Republicans at UC Berkeley.

Unfortunately, after thousands of people showed up to protest Milo’s involvement, the speech had to be canceled. He was escorted off property. Police officers had to come out and announce that the event was canceled. In short, the students at UC Berkeley did not want a Breitbart spokesperson, somebody who has ties to white nationalists, somebody to defends white nationalists, and somebody who’s actually been banned from Twitter for their erratic, and irresponsible, and dangerous behavior, they didn’t want that person speaking at their campus to the minds of all of these young students. They stood up, exercised their First Amendment freedoms, and got him kicked off the campus.

The Republicans, the college Republicans, they are the ones who paid for this, it turns out that, because of all the protestors, they realized probably not going to make their money back. Because Milo was maybe scared, he went along with it. The college has full discretion over what gets canceled, what goes on. Happens all the time. Colleges book comedians. Sometimes the comedian will say something that’s less than savory, they get canceled. Bill Maher got canceled for his statements on Islam. Where were you there, Donald Trump? Probably right there with him.

You see, just because you have a hateful belief, or horrible things to say, doesn’t mean that you get to say it. That’s not what freedom of speech is all about, Donald Trump. Hate speech is not okay. If a federally funded institution in the United States says, “We’re not going to give a platform to somebody to spew their hate speech,” you can’t fight that. It incites violence. It incites hatred. There’s a very, very, strong precedent for getting rid of this kind of speech in the United States. It is not further discussion. It does not further knowledge. It does nothing but incite hatred and violence, and therefore is not protected speech.