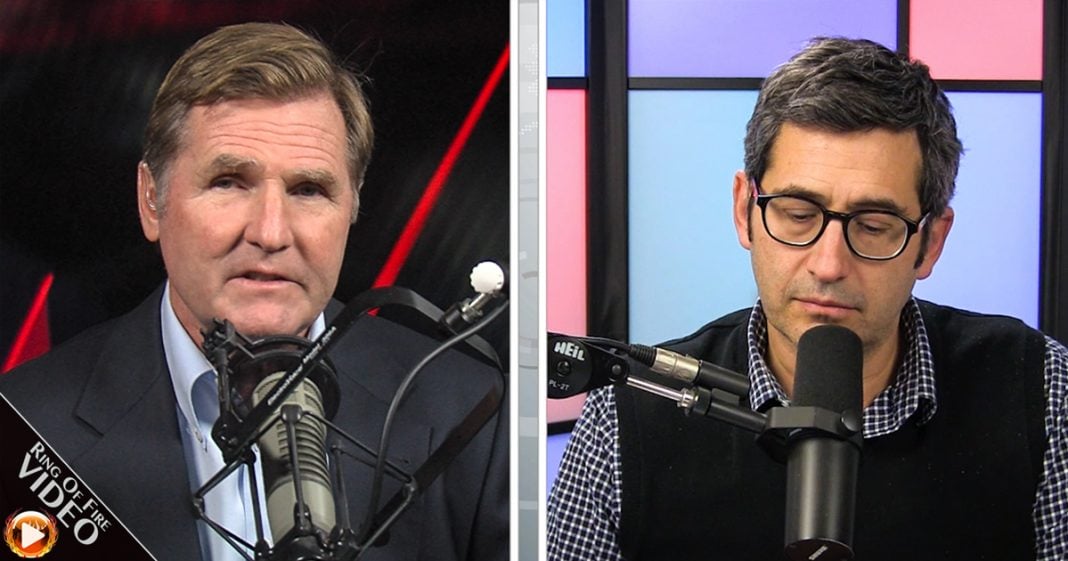 Sam: Pap, of course, the big story of this past week, well there was a couple of them. They come quick.

Sam: I guess the first big story of the week was the Trump Administration’s, I don’t know how to characterize this, botched but also horrific attempt at banning essentially immigrants and refugees from seven Muslim majority countries. They backed off some of it involving green card protections. They held a five year old at an airport for an extended period of time because of the potential threat that five year old can represent to Americans. I have a four year old myself. I know how dangerous they can be.

Pap: They get up on those curtains, they’ll …

Sam: Health and sanity, but let’s, I mean one of the things that was really stunning about this was we got a little bit of sense of what will happen if Donald Trump calls for some unconstitutional orders going forward and courts determine they’re unconstitutional, then what happens?

Pap: Okay, first of all, what he did is not unconstitutional, okay? Sam, let me start from the top. In order to best understand where this is headed, it’s important that I think you understand where it started. Trump ran on the promise that he was going to begin this process that he refers to as extreme vetting. We’ve seen in the differences between Obama and Trump, Trump has a focus on execution policy quickly. He’s like a bull in a China shop, a lot of disaster surrounds what he does. Obama seemed to languish, couldn’t get anything done the first two years in office and that seemed to follow him, great speaker, cannot execute on most of the things he says.

Trump is just the opposite but he’s dangerous, so immediately, Trump signs an order asking for 120 days to implement this extreme vetting process. That’s what it’s all about. He wants this time, that’s what they say this is all about. That’s the cover. He wants to implement this extreme vetting process and he does it interestingly enough, without conferring with any detail with the Justice Department or Homeland Security. He takes the attitude that he’d rather ask for forgiveness than to ask for permission and he implements these policies that he believes got him elected to the presidency.

If you look at the polls today, the American public likes what he’s doing by 57% approval. It’s apparent that he relied on, if you go back and say, ‘Well, who advised him?’, well it’s apparent that they relied on a 1952 law that developed out of the McCarthy era, where the US President was given the authority to make these extensive and even draconian types of decisions and he can do that under this law to any, and this is the words, any class of immigrant from any country that he deemed might be detrimental to the interest of the United States. That law anticipated that America’s, and this is where the legal argument, I started out by saying it’s not unconstitutional. It really isn’t at this point. It can become that in the future on how it’s enforced but the law anticipated that America’s police power would always have a really very powerful edge where it came to evaluating constitutionality. It relates to health safety and welfare of American citizens.

The point is that police power, the question is would it ever supersede constitutional arguments that center around race or religion. Now, many, if you look at one, if you look at …

Sam: Let me just explain that concept to people, so it’s basically is there an overriding interest by the state to basically over, it’s almost, the analogy would be you have freedom of speech but you can’t yell fire in a theater.

Sam: That is an example of …

Sam: The state’s interests in trying to help the health and safety of people because you don’t want to create a false panic and everybody ran out of the fire place and so there you go.

Pap: That’s correct, that’s correct, so 1952 legislation was centered around that one concept. The problem is when people say that 1952 is where we stop the analysis is they’re wrong. You had some cat that showed up in the New York Times that talked about the Immigration and Nationality Act of 1965. He was totally absolutely wrong about his interpretation but that didn’t stop the New York Times from making it into a story. He talked about the Immigration and Nationality Act 1965. It forbids discrimination on the basis or race, sex and nationality or place of birth but it had to do with quotas. It was about every year, the United States or the United States says, ‘We’re going to allow X number of immigrants, maybe 50,000.’, I don’t know, whatever the number is. They said that under this act, you can’t discriminate with those areas.

Now, that was a quota. The issue was a quota law, okay, but after 1952, where the executive branch was given this extraordinary power to make this broad generalization and say look, I can keep any class of people out for any reason if I think it affects the safety of the United States, but in 1990, here’s where it turns. Here’s where things get difficult for Trump. In 1990, there was a switch, and the switch added to the 1952 legislation. It said you have to show, federal government, you have to show that this entity, this person that you’re trying to keep out, actually had took some overt action towards interfering with the safety of American citizens.

Understand Sam, that’s a very subjective kind of idea. What we’re going to see is we’re going to see that Trump’s going to be doing things like taking telephones and saying, ‘Who’d you call this month? Who’d you call this year?’ If there’s anybody suspect on that list, that’s enough to subjectively state there’s an overt act. Let me see your computer program. If they took any kind of connection up with somebody that the feds might call a terrorist organization, that’s an overt act. I mean look, this is just the beginning of all this. This is, this is just absolutely the start. These three judges, the four judges that made these decisions about over the weekend, those decisions were very small class of people, about 100 people that they said, ‘You cannot detain somebody. They’re in the air. They’re flying over. They have no notice of anything. You cannot detain them,’ so it’s a very narrow kind of interpretation.