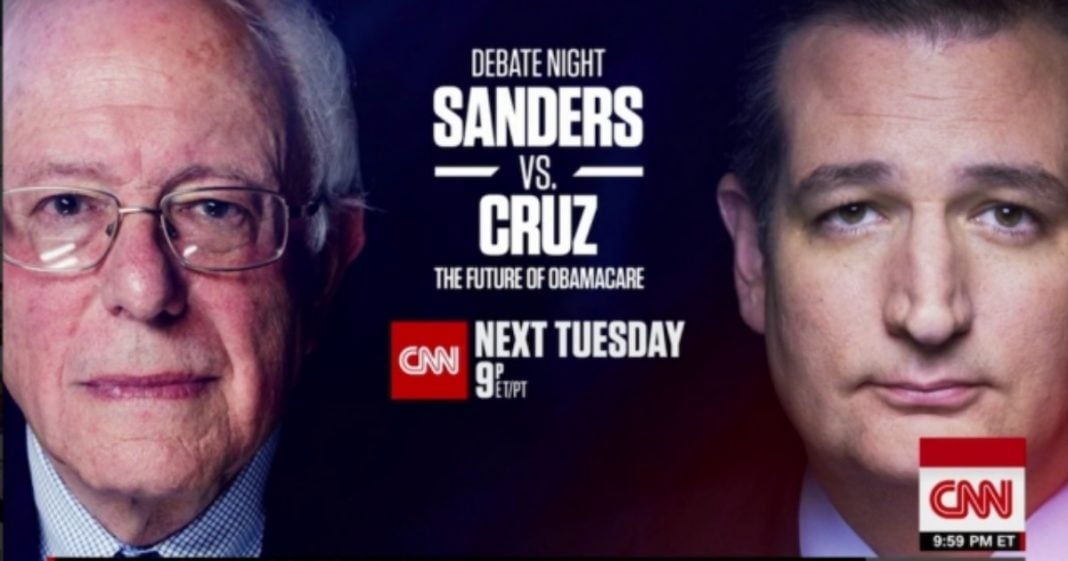 Next Tuesday, two former presidential candidates will face off in yet another debate, this time not arguing over a political office, but rather a key piece of legislation on which millions of lives depend.

Senator Bernie Sanders and Ted Cruz will participate in a CNN debate focused on the Affordable Care Act, an act that Republicans are eager to repeal and Sanders is eager to replace.

The debate should be an interesting and unexpected one, especially because the two might tend to agree on more than you might expect. After all, both have major issues with the current health plan and want to see it replaced with something entirely different.

Of course, where they think the plan needs to go is as ideologically separate as can be. While Ted Cruz and other Republicans want to keep healthcare optional and in the hands of business owners, Sanders and the Berniecrats would prefer to see a single-payer system – or even universal healthcare. One in the private sector, the other in the public sector. One small government, the other big.

Additionally, we already know that Sanders has a concrete idea for what he might replace the ACA with – Republicans like Cruz, meanwhile, have offered no substantial replacement despite spending eight years demanding a repeal.

The debate will also be extremely interesting because Cruz is considered a very skilled debator. While he may try to out-clever Sanders, Sanders will take no nonsense and play no games.

Despite the fact that there is no vote to follow the debate, and no more elections to be held (for now), this debate could serve the American people with a true, honest assertion of our current health system and the health system it could become.

This is one debate I will be eagerly awaiting.