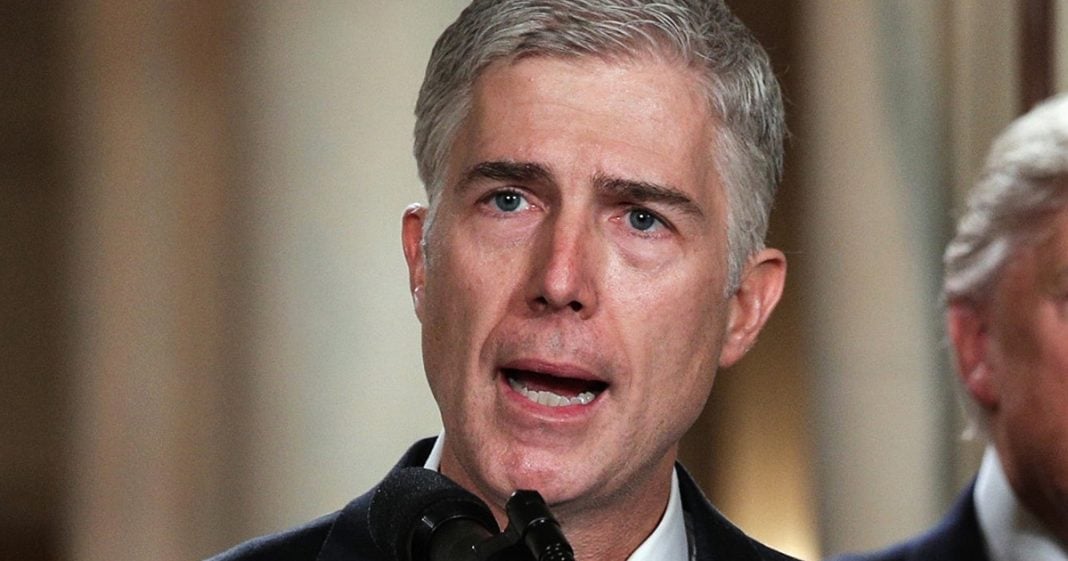 Donald Trump has appointed Neil Gorsuch to the seat vacated on the Supreme Court by the death of Antonin Scalia. Gorsuch is the guy who gave us the repressive Hobby Lobby decision denying women access to birth control through their insurance, and he checks off nearly every conservative credential to be a judge.  But what could be worse than Gorsuch are the 114 other federal judicial vacancies that Obama left behind that Trump will now get to fill with ideologues. Ring of Fire’s Farron Cousins discusses this.

Earlier this week in a very reality TV show type setting Donald Trump announced his very first nominee for the US Supreme Court. That person of course was Neil Gorsuch. Now, Gorsuch checks all the boxes on a Conservative checklist for the kind of horrible person that Republicans want to put on the Supreme Court. He is the guy that gave us the Hobby Lobby decision that denied women access to birth control through their employer’s health insurance plans. He has stated in books that he’s written that he would love to get his hands on Roe Vs. Wade. We pretty much know exactly what this man is going to do in terms of taking away the reproductive rights of women across this country.

In addition to his anti-woman mentality this guy also has an anti-worker mentality, anti-consumer mentality. He made all of his money in the private sector working at a corporate defense firm, representing big pharma, big oil, Wall Street bankers, the typical people who screw over American consumers while lining their pockets with billions of dollars. Those are the kind of people that made Neil Gorsuch rich, and those are the kind of people that he is going to side with as a Justice. He did it in Denver, he’s going to do it in Washington DC.

Gorsuch is the perfect Republican Judicial Nominee, because he is everything that Republicans love. Here’s what’s scarier. Gorsuch is probably one of the worst people you could pick for the US Supreme Court. What’s even scarier are the 114 Federal, Judicial vacancies all over this country that President Barack Obama left behind when he left office. See, for years Republicans had been blocking all of President Obama’s judicial nominees. I know most people only think Merrick Garland because you only pay attention to one-half of it, but there’s 114 very powerful positions available in the United States on Federal Courts.

Donald Trump now gets to appoint 114 people. It’s not just the Supreme Court. Listen, most court cases in the United States do not go to the US Supreme Court. Yes, it is the third branch government, it is the highest court in the land, but it’s not as powerful as you think. When they choose to not take up a case, then that case stands with the decision from the lower federal court. Those are the courts that Donald Trump is in the process of remaking right now, because Barack Obama failed to do it. He failed to do recess appointments. Democrats failed to kill the filibuster for this enough to let him appoint people. The few people that he did manage to appoint were highly, hugely corporatist.

Donald Trump is going to do the same thing. They’re going to remake this country by remaking the court system from the bottom up. Most people right now are only talking about the Supreme Court. Will the Democrats block it? Will they not? What are they going to do? They’re saying they’re going to block it, but as we’ve seen in the past, they’re damn sure going to back down. You’re going to have enough turncoats in the Democratic Party to get this guy confirmed. He’s going to get the seat that should’ve gone to Merrick Garland, even though Merrick Garland wasn’t even the best pick Obama could’ve made. That’s how the story ends.