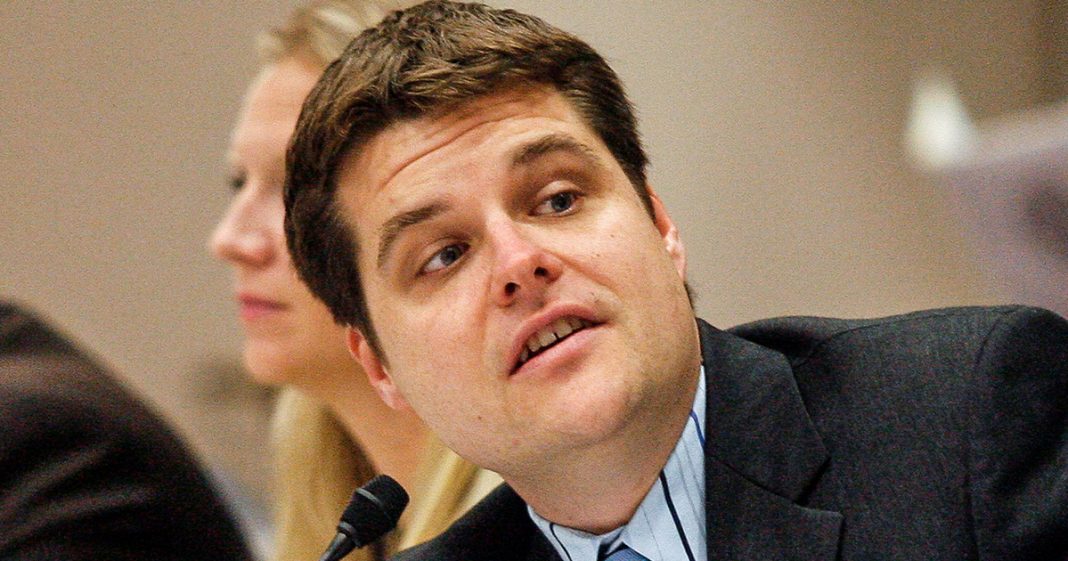 Florida Congressman Matt Gaetz has drafted legislation that will officially get rid of the EPA once and for all.  Keep in mind, this is coming from a man who lives in a state that is already suffering from the negative consequences of climate change. Ring of Fire’s Farron Cousins discusses this.

A Florida Congressman by the name of Matt Gaetz has drafted legislation for the US House of Representatives that would literally officially and finally get rid of the EPA. The legislation that Gaetz has drafted would abolish, abolish the EPA completely. The Environmental Protection Agency, in the United States would no longer exist under Gaetz’s legislation.

Before I go into why this guy is such an idiot, it’s worth noting that Gaetz is actually a Congressman from my district in Florida. Obviously I did not vote for him. I never would, but that’s what just makes this story hit a little bit closer to home because Gaetz is representing an area that was hit the hardest, among the hardest at least, from the 2010 BP oil spill. We still have tar balls rolling up on our beaches. Tourism in this area was almost dead for a year and a half after the BP oil spill, and here we have this new Congressman serving us in Washington that thinks we need to get rid of the Environmental Protection Agency when the very area that he represents relies solely on the environment for our income. Tourism is what keeps this area that I live in in Florida alive, and Gaetz wants to kill it.

He wants to kill his hometown because he just hates the EPA? This doesn’t make any sense, and when you spread beyond this area of Florida and you go south, hell in Miami the tides are now washing up into the streets everyday. Roads are being washed away from just the new natural cycle of the tide. That’s climate change at work and this Florida Congressman wants to get rid of the EPA. We have the everglades, where the Koch brothers want to go in there and start fracking the hell out of it and destroy that huge area of swampland in south Florida that’s home to countless species, some endangered. Now Gaetz wants to get rid of the EPA. Screw them, right? They’re just animals. They don’t matter.

Well what about all the people that could be poisoned? That’s why we get rid of the EPA so we don’t have anybody going down there to test the water and make sure you’re not drinking fracking chemicals every time you turn on a tap to fill up a water to give to your kid. That’s what Matt Gaetz wants. That’s what the Republican Party in the United States wants. They want to get rid of anybody holding corporations accountable when they poison people. They want to get rid of any organization that prevents corporations from poisoning people.

It’s also worth noting that the Environmental Protection Agency was created by one of the most crooked Republicans in the history of the United States and that was Richard Nixon. He was a bad guy, a bad dude as Donald Trump would say, but he actually did a good thing here, creating this organization. Donald Trump won’t have anything like this to redeem his legacy. Neither will a guy like Matt Gaetz or any of the other Republican sycophants sitting in Washington DC right now thinking of ways to kill and harm American citizens, because that’s what they’re doing with his.

If you get rid of the Environmental Protection Agency, people are going to die. It’s not going to be one or two here and there. It’s going to be tens of thousands of people if not millions. When you add in the effect of climate change, it will be tens of millions of people dying all because you wanted to abolish one federal agency for no real reason other than you’re just an asshole.