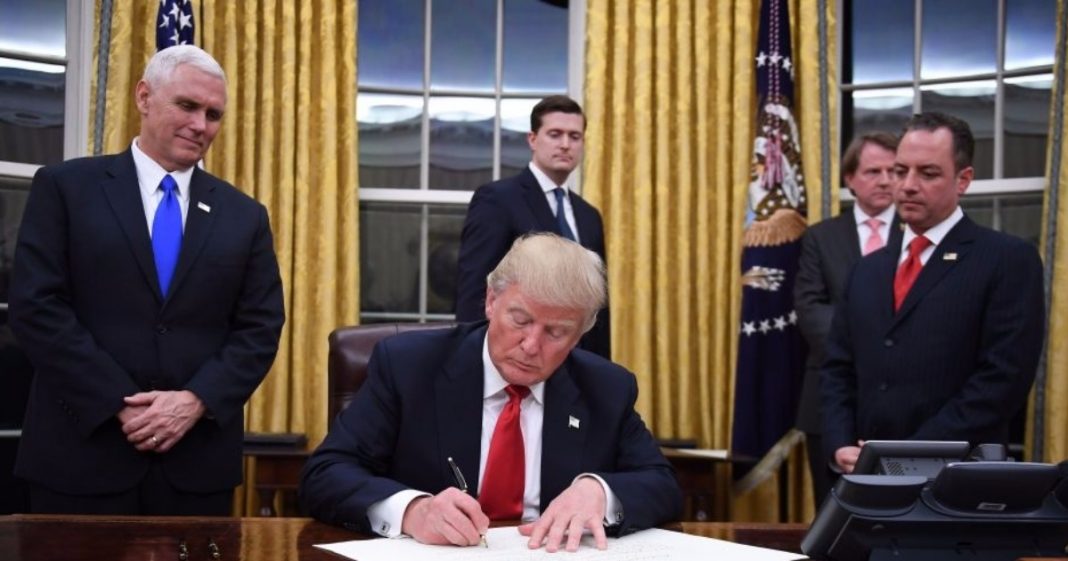 To the alarm and dismay of many, Donald Trump has been extremely busy since January 23rd (he decided to take the weekend after the inauguration off), signing one executive order after another. Most of these are intended to make life more difficult for average people such as the restoration of the “Mexico City Policy,” the freeze on federal hiring and gutting significant provisions of the Affordable Care Act while others play into the fears of his low-information base (i.e., ordering the construction of the “wall” between the U.S. and Mexico and banning Muslims traveling from countries in which he has no business interests).

In addition to these are numerous memorandums enriching his buddies in the fossil fuel industry at the expense of the environment; for example, pushing through the Dakota Access and Keystone XL Pipelines or “easing regulatory burdens” on domestic manufacturing.

So far, he has signed 15 such executive orders, and many more are coming down the pike including one that would reauthorize the use of torture on suspected terrorists and another that would legalize discrimination against LGBTQ persons.

So what do all of these mean for the country?

First of all, it helps to get clear on what executive orders actually are. The legal definition is “a rule or order issued by the president to an executive branch of the government and having the force of law.”

Although there is no basis in the Constitution for a president to issue executive orders, every president since George Washington has used them. It is one way in which a president carries out the duties of the office, one of which is to supervise federal agencies and provide information about what they are doing, how they are going about it, and how best to manage the resources allocated to them. While there are numerous ways a president can do these things, the Executive Order is the most formal method. In essence, the president is telling the country about his priorities and how the power of the federal government will be used.

Executive Orders do have the force of law. They are also subject to judicial review, meaning the courts can strike down an executive order or stop it from being carried out as is currently happening with Trump’s travel ban.

This said, there are limits as to what an Executive Order can accomplish. As the term implies, the job of the Executive Branch is to “execute,” as in “carry out” or “enforce” the law. The President cannot make laws (that’s the job of Congress), nor allocate funding for carrying them out (which is also rests with Congress).

For example, when Trump issued his Executive Order to build his “wall,” he basically told the Secretary of Homeland Security that building the wall was to be #1 on that agency’s list, and that the DHS was to commence with the project – using funds already allocated to that department. That’s an important point. If the DHS doesn’t have the resources to carry out the project, Trump’s Executive Order is meaningless, since Congress holds the power of the purse. If Congress doesn’t agree to fund the wall, it will not be built.

Another concern is overreach. At what point does a president’s executive orders trespass into Congressional lawmaking authority? That is a legal question that has come up with Trump’s opening salvo in the battle to overturn the Affordable Care Act. His executive order eliminates the individual mandate, however that provision is at the heart of the ACA; the idea is to bring as many people into the pool as possible, thus spreading the risk for insurers and keeping costs manageable. Without that mandate, many healthy young people would forego getting insurance – so some type of “stick” approach is necessary.

The question: is Trump attempting to use this executive order to overturn the law? If this is the case, he’s definitely overstepping his bounds, since repeal of the law requires an act of Congress. On this front, a number of GOP lawmakers are starting to get nervous, fearing the wrath of their constituents – as well they should.

Another issue that comes up is how those executive orders will be interpreted and carried out. Simply because an Executive Order is issued does not necessarily mean it will be implemented.  For example, when President Obama first took office, he signed an executive order closing down the Guatanamo Bay Detention Facility. Eight years later, the prison is still in operation.

There is no doubt that Trump is attempting to flex his political muscle. How far that will take him in moving his agenda forward remains to be seen.