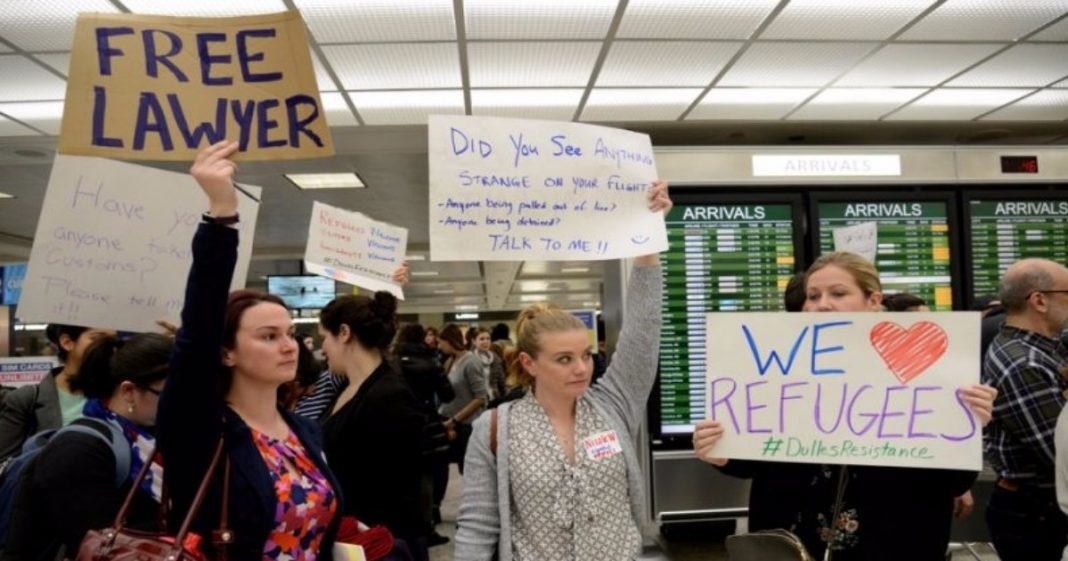 The popular song by musical icon Beyoncé once asked, “who run the world?” to which the chorus responded, “Girls!” now in Trump’s America, the only thing we want to know is “who run the resistance?”

Now that we have entered the era of a pussy-grabbing President Trump, the resistance has already begin – and at it’s helm are leagues and leagues of angry, defiant women.

Though opposition seems to be coming from every side, women are the ones leading the charge against the restrictive administration, and opposing the president every step of the way.

First it was the women’s march, with millions of women and allies nationwide taking to the streets just a day after Trump’s Inauguration to make their objections to an anti-women administration heard. They offered solidarity and strength when so much of the nation and the world had never felt so low.

Not a single protester was arrested and the only thing pro-Trump detractors could complain about was that posters were left behind, littering. Fortunately, the permits organizers obtained to hold the marches covered the cost of cleanup.

In the end, the massive march broke records and solidified itself as the largest U.S. protest in modern history. Despite concerns, it appears that the march was not just a one-time action, but rather a catalyst which has inspired millions.

While still more protests raged – this time not explicitly led by women – female legal minds were fighting tooth and nail, paying for plane tickets to sit inside terminals throughout the night and entire weekend, holding signs and offering assistance to any non-citizen in threat of being detained or deported.

New York magazine noted the same gender disparity and spoke with several of the women who offered their services.

“Chicago-based lawyer Dee Armstrong told the Cut that she saw an approximately 70-30 female-male ratio during her weekend shifts working with immigrants and refugees at Chicago O’Hare, while on Twitter, Atlantic editor Matt Ford pointed to a similar “striking” gender disparity among the lawyers at Washington Dulles Airport.”

The first federal judge to order an emergency stay in relation to the ban was a female judge from Brooklyn, Judge Ann M. Donnelly of the US District Court, a freshman judge appointed by president Obama just over a year ago. Donnelly received the case lodged by the ACLU against Trump and the federal government on behalf of two of the first detained non-citizens, Iranians, who were being held against their will and had been long denied access to legal representation in an airport.

Donnelly ordered that the executive order issued by Trump should be suspended temporarily as it pertained to those individuals who were in transit at the time the order was issued. Five other federal judges made similar rulings, three women and one man.

Then most recently, the acting Attorney General Sally Q Yates defied Trump’s executive order on Monday, declaring that she would not direct the Justice Department to defend or enforce the order. Yates argued that the law was unenforceable and possibly illegal, citing the language of the law and past comments made by Trump. For her courage, she was swiftly fired by the Trump administration, publicly called “weak” by the White House, and was replaced with a Yes Man. She likely expected she would be dismissed, and yet she still acted.

Republican congressman Dave Brat complained about the invigorated interest of women in his district:

“Since Obamacare and these issues have come up, the women are in my grill no matter where I go.”

The context of all of this must be that women likely feel they have something to prove. Despite the fact that we are acting now most strongly against Trump, the fact is that over half of white women voters (53%) cast a ballot for Trump. Even college-educated white women still went for Trump at 51%.

Despite this, it only makes sense that the most anti-woman president, one who bragged on a hot mic about sexually assaulting women and has a history of disparaging women for their physical appearance, would be brought down by the unified vision of millions of angry, defiant women.

Nothing President Trump hates more than women who say no to him.

See you for day 11, ladies? pic.twitter.com/dnueK1tsmJ