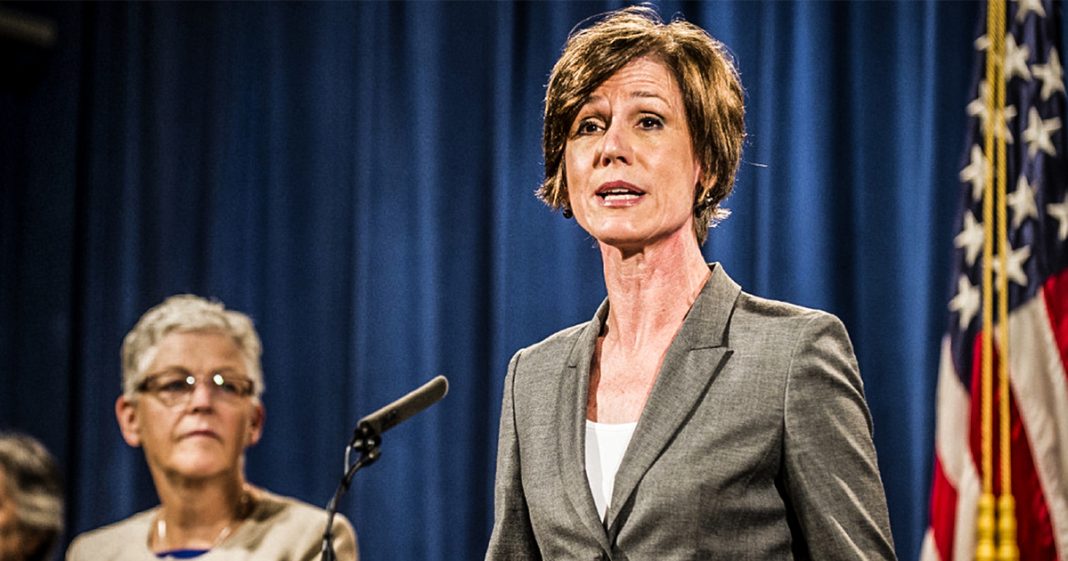 Donald Trump is standing by his travel ban for Muslims, and he’s knocking down anyone who stands in his way.  Acting attorney general Sally Yates was fired because she had told the Justice Department to not defend Trump’s ban, and this could be just the first domino to fall. Ring of Fire’s Farron Cousins discusses this.

Monday evening, after CNN reported that acting Attorney General Sally Yates instructed her justice department to not defend Trump’s travel ban, Donald Trump announced that he was firing Sally Yates as acting attorney general. Now Yates had been put in power by President Obama and was meant to serve until Donald Trump’s attorney general nominee was officially appointed by the House and Senate.

Now what’s interesting about this is that Donald Trump took someone who refused to back down from a legal position and just fired her because she disagreed with him. In fact, Jeff Sessions, during his Senate Confirmation hearings, actually told Yates that she was going to have to say no to Donald Trump every now and then. She did that and she was canned.

Now Yates was only following the law. Just because Donald Trump signs an executive order does not always mean that it’s legal. Yes, it immediately goes into effect, but until the court system has had time to look at it and determine the constitutionality of it, it’s not necessarily legal. When you have a guy like Donald Trump who’d never spent a single day in either law or politics until the day he was inaugurated, he doesn’t know what in the hell he’s doing.

He doesn’t know what’s legal and what’s illegal and this law that he has signed, this executive order, is illegal. It directly violates the 1990 immigration act signed by George H.W. Bush into law. That law specifically reverses laws that have been in place since the 1950s that allowed the US to keep people out of this country based on race, religion, belief, political activity, anything of that nature. The 1990 law expressly changed that language to say that these people banned from the United States were prevented from entering the United States had to have been directly involved in an activity that either put American lives at risk or that indicated that they wanted to put American lives at risk.

There is no evidence that these 90,000 people that Donald Trump is trying to keep out of this country right now have engaged in any activities that have harmed Americans or that these people want to harm Americans. Sally Yates understood that. She understands the law unlike Donald Trump and that’s why she wasn’t going to let her justice department defend something that she knows is illegal and will not stand up in the courts.

Furthermore, this story took a really interesting turn later Monday night when Steven Miller, a White House policy director, the guy who along with Steve Bannon helped to draft this bill, he went on MSNBC and he said, “It’s sad that our politics has become so politicized.” Now let that sink in for a second. Politics has become politicized which essentially means politics is politics, but that’s the way the Trump Administration is trying to frame this argument, that it’s all political, that democrats are just mad because it’s a republican doing that.

No, we’re mad because you’re breaking the freaking law, because you’re too stupid to understand it and that’s why nobody in this country should’ve voted for a man who doesn’t have any experience. The only good thing that’s going to happen is that Donald Trump’s blatant disregard for the law, his refusal to learn the law, will get him kicked out of office. I have no doubt in my mind that Donald Trump is not going to serve a full four years. He will be removed from office before that.

We’re freaking two weeks in and this guy’s already blatantly breaking the law. The only question is, how much longer is he going to do it before somebody finally stands up and says, “Enough is enough. Let’s begin these impeachment hearings.”