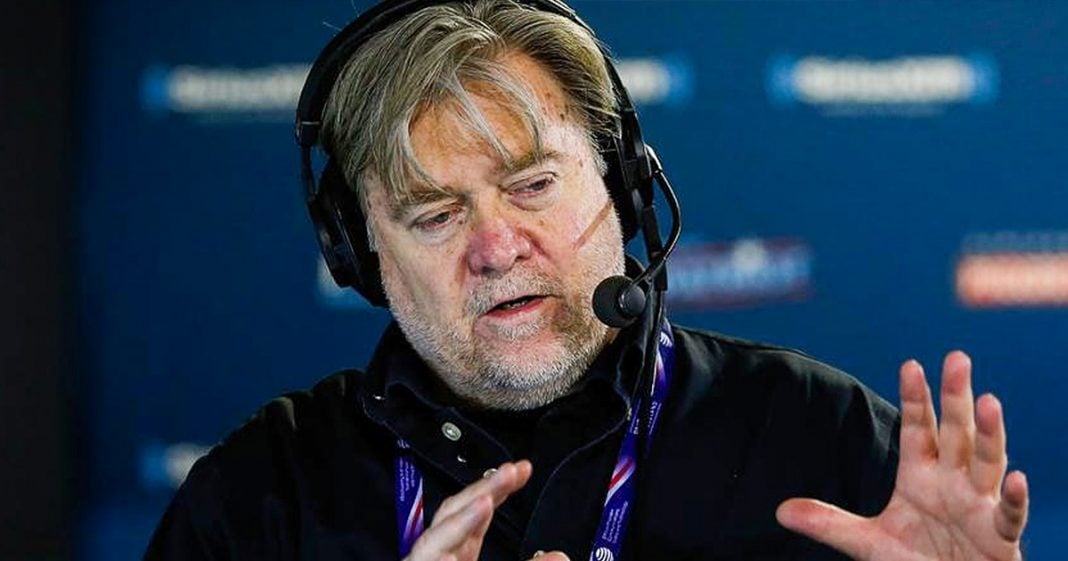 This past weekend, Donald Trump decided to purge members from the National Security Council, and elevate his advisor and known White Nationalist Steve Bannon to the top post. Ring of Fire’s Farron Cousins discusses this.

Over the past weekend Donald Trump made an unprecedented move by demoting and firing members of the National Security Council and in their place promoting top advisor Steve Bannon to essentially run the National Security Council. Steve Bannon, a white nationalist, a man who has given a voice to white nationalists and white supremacists all over this country, a man who sympathizes with people who believe that being white means being better, is now essentially in charge of national security for these United States.

If you don’t see why that’s a problem then you are beyond help at this point. Steve Bannon hates people who are not white. He hates people who do not subscribe to the same religion as him. Donald Trump being the brain dead president that he is decided to give Bannon this ultimate power. It makes you question who’s really in charge here because it is clearly not Donald Trump.

If he really wanted to make America safe again he would have appointed a general, somebody who has spent their entire lives in the military, who understands military policy and military action and military restraint. That’s the kind of person he would have put there, not a guy who spent a couple years in the navy and then went off to run one of the worst fake news organizations in this country, because that’s what Steve Bannon is.

In the past this position that Bannon now holds has been reserved for some of the best generals and military officers in this country, not people like Steve Bannon. Not people who think that you’re not okay if you’re not white. That’s what’s setting the policy right now in the United States, both domestic and foreign, a white nationalist. It’s not President Trump, it’s President Bannon. That’s what we need to be concerned about.

Steve Bannon is an extremist in every sense of the word. Not just on racial matters but on conservative matters. He is as far to the right as you can get. He believes in these made up conspiracy theories like Pizzagate. Now he’s in charge of our national security. Steve Bannon is the guy that’s going to keep us all safe. I can tell you as somebody who is a part of the progressive media machine, I do not feel safer. In fact I feel more like a target today than I did last week.

Steve Bannon is a national security disaster waiting to happen. A thermonuclear disaster waiting, because that’s what we’re looking at here now. We’ve seen other countries this past weekend launch nuclear capable missiles as a show of force. No warheads on them but they’re capable of holding nuclear warheads. Just to show the United States that they’re not playing around. You think Steve Bannon is going to keep us safe from that? When other countries are firing pretend nukes just to see if they can get us?

We have very real problems in this world right now, and a lot of them are because of Donald Trump’s actions. Steve Bannon is not the kind of guy that’s going to keep us safe. He’s not the kind of guy that’s going to let us rest easy at night, knowing that we’re not going to wake up in a war zone. In fact it’s the exact opposite. Steve Bannon is a danger to the United States and Donald Trump just can’t stop from giving him more power.