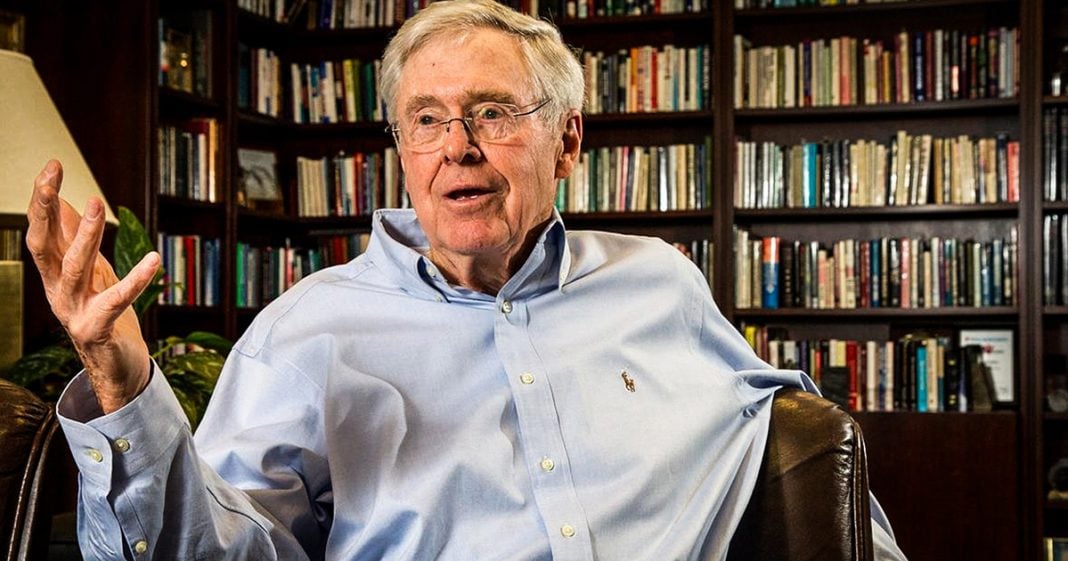 Charles Koch believes that Trump’s executive order banning Muslims from entering the US is reminiscent of Nazi Germany.  This is true, but Koch needs to own up to the role he played in paving the way for President Trump. Ring of Fire’s Farron Cousins discusses this.

As thousands of people across the country this past weekend took to the streets, took to airports to protest Donald Trump’s band on Muslims entering this country from several different countries across the world, there was one person who spoke out against this travel ban that kind of shocked everyone. That person was Charles Koch. Not that long ago Charles Koch had actually compared Trump’s proposed Muslim ban to what the Nazis did in Germany during the second world war. Now this past weekend he was a little softer in his rhetoric, but he says that this is the wrong approach for a free and open society.

Now keep in mind, Charles Koch has many people that used to be staff at his think tanks and organizations that are now working directly in the Trump administration. Additionally, before the inauguration, Charles had a personal phone call with Vice President Mike Pence where the two of them talked about policy and things like that. The Kochs have long been supporters of Mike Pence. They refused to support Donald Trump in the presidential campaign. But here’s the thing, Charles Koch can go public and say that this is wrong, that it’s like what Nazi Germany did, we all know that. But here’s the thing Koch, you created this. You lay the political foundation upon which Donald Trump built his campaign. You may not like this Muslim ban that President Trump and President Bannon have put in place, but this is all on your shoulders, yours and your brothers’ shoulders.

By creating this tea party movement that questioned the legitimacy of President Barack Obama claiming he was born in another country, claiming that he was a Muslim when he wasn’t, by claiming that there were going to be death panels as a result of Obamacare, you created this. This is your baby. Donald Trump, though you may not support him, is your guy. You helped to dump down the state of American politics so much that we elected somebody like Donald Trump. So you can cry and piss and moan all you want about this Muslim ban, about this refugee ban, about anything that Donald Trump does, but at the end of the day you know that you did this to us.

We’re not going to forgive you. We’re not going to join sides with you. We’re sure as hell not to take your money because we know how evil you truly are. And I guarantee you you’re only saying these things publicly, and behind closed doors you probably support it. But this is what you get; when you spread misinformation for a decade, when you poison political discourse as part of your daily routine, this is the end result. You created a dumb down American public that was more than willing to vote in this numb skull Donald Trump even though he told us he was going to do these things. So you can act indignant if you want, but at the end of the day the entire Trump presidency rests on the shoulders of Charles and David Koch.