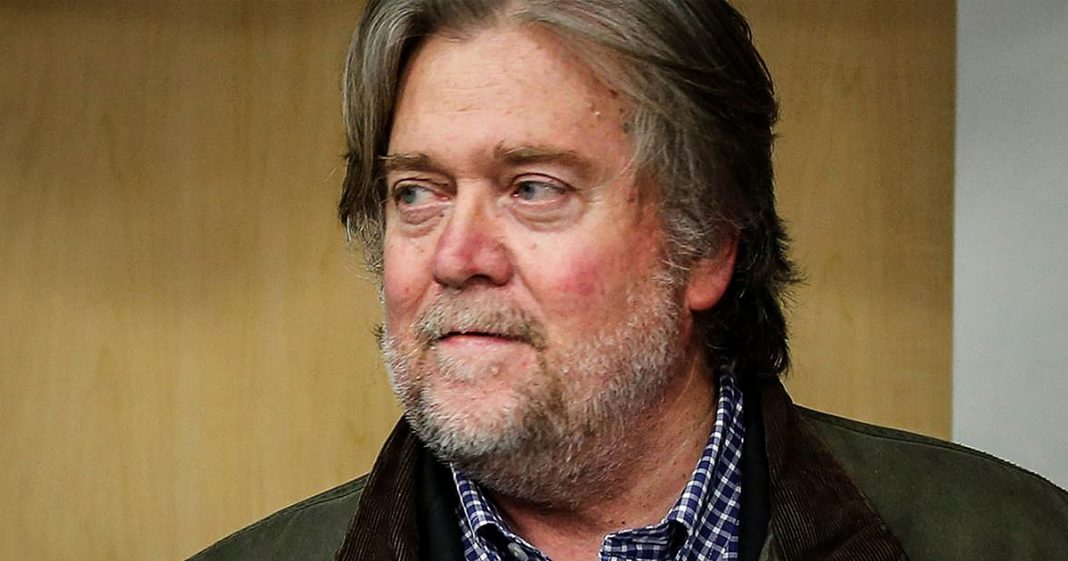 According to aides, many of Trump’s executive orders are actually being written by Steve Bannon, the former chairman of Breitbart who is a big supporter of White Nationalism.  This helps explain why these orders are so extreme, and why many government agencies are growing more and more furious over their exclusion from the process. Ring of Fire’s Farron Cousins discusses this.

Trump To Waste Taxpayer Money Investigating A Conspiracy He Made Up

Donald Trump has now been in office for seven full days. During those seven full days we have already seen at least 12 executive orders, by the time you watch this likely more than 12. Here’s the thing. How can a guy with absolutely no political experience to speak of come up with so many executive orders in such a short amount of time? The answer according to White House aids is that Trump is not actually the guy writing them. No. That job is falling on advisor Steve Bannon, the former chairman of Breitbart and a pretty much white nationalist guy, somebody who has definitely defended white nationalism at every given opportunity and another advisor, Stephen Miller for Donald Trump.

Here’s the question. Why in God’s name are we not hearing more about the fact that a white nationalist like Steve Bannon is the one writing these presidential executive orders for Donald Trump to sign into law? Why? Why are media outlets not discussing this at greater length? Why are Democrats in the House and Senate not getting upset about this? Why are they still willing to go along with a few of the things Trump is saying because occasionally he says something a little good like let’s get out of TPP? That was just the distraction, folks. If you’re focused on the fact that Donald Trump pulled the United States out of TPP, then you’re not paying attention, and that’s what he wanted you to do. He wanted you to focus on the shiny object of TPP and not on the fact that he is destroying this country by letting people like Steve Bannon write his executive orders for him.

We basically have Breitbart News writing legislation for this country. Breitbart News is telling us what we can and can’t do now, legally. Here’s the other problem with this. They’re churning out these executive orders so fast that Congress has not had time to review them to even make sure that it is legal for the President to do this. Other government agencies, Department of Defense, super pissed right now because they’re not getting to review the policies these executive orders that actually directly affect their department.

In the past, even though Presidents have had to use executive orders to get around Congress, Congress still ends up reviewing these to make sure that it is legal. On top of that, the President seeks the advice of members from the agencies to whom these executive orders will directly affect. They seek guidance, they ask advice. They want help to make sure they’re not screwing anybody over and more importantly doing anything illegal, but Donald Trump doesn’t care. Steve Bannon doesn’t care. They have an agenda, and come hell or high water they’re going to make sure that that agenda gets enacted. That is a dangerous thing for the people of the United States, it’s a dangerous thing for Congress from what we’re hearing now, and it’s a dangerous thing for all government agencies.

We could very well be looking at an executive order that authorizes terrorism. Yeah, that’s illegal, it’s against the Geneva Conventions and all other sorts of international treaties. It’s against US law. Donald Trump can sign it, make it technically legal. It’s still illegal, but they’re going to do it because they don’t care because none of these people have spent a single day in either politics or law. They don’t know what they’re doing. Donald Trump is political idiot, a legal idiot, and so is Steve Bannon, and so is Stephen Miller and so is every other person that Trump has surrounded himself with in Washington, D.C.

If I were a Republican which thank God I’m not, I would be looking at this chewing my fingernails down to the nub screaming, “Why are you making such blatantly obvious mistakes, giving the Democratic Party fodder to impeach you in six months, you idiot?,” because that’s what’s going to happen. Trump is doing some pretty awful things right now, but at least we can take a little bit of solace in knowing that he is screwing up so monumentally that it’s only a matter of time before he does something blatantly illegal which opens the window to getting him out of office before the end of his first year.