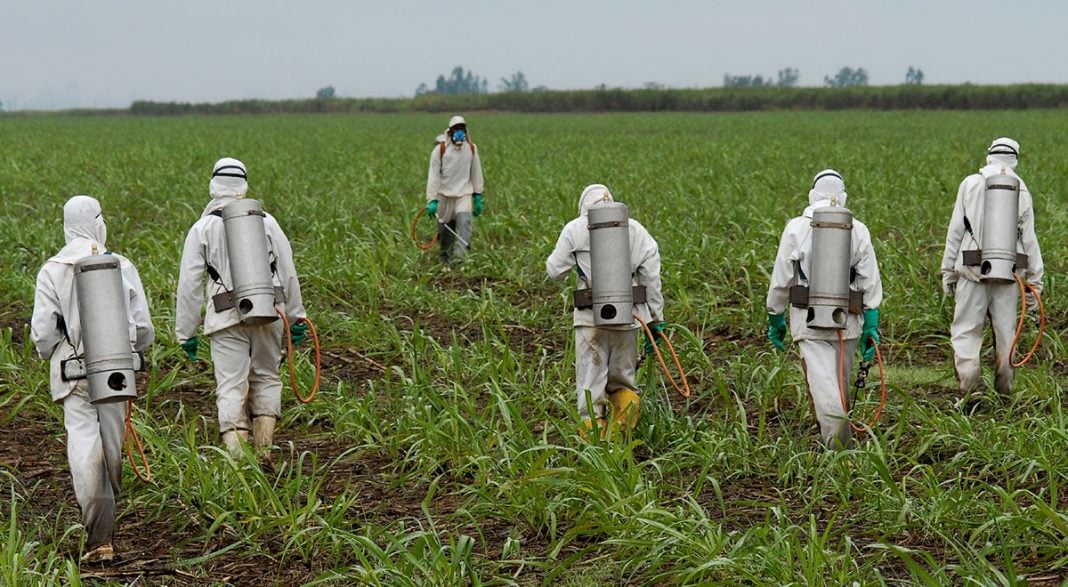 Just as the overuse of antibiotics have been leading to the development of resistant “superbugs,” so too has overuse of Monsanto products been causing the rise of “superweeds” that grow up to ten feet in height and can damage farm equipment. It’s also causing serious crop damage and leading to rising tensions among farmers in the Great Plains region. These superweeds, which can be the size of cornstalks, now infest 100 million acres of farmland across ten states.

According to a report from the Union of Concerned Scientists (UCS), these new superweeds are a direct result of twenty years of Monsanto and other companies selling herbicides, such as glysophate-containing Roundup. These products inevitably lead to the evolution of resistant weeds. It hasn’t helped that most U.S. farmers adhere to the obsolete practice of monoculture, planting thousands of acres with a single crop, which provides an ideal environment in which herbicide-resistant weeds can develop.

Today, half of the farms surveyed are infested with weeds that are completely resistant to glyphosate. It is a problem that has been feeding on itself for over two decades. Monsanto began producing its genetically-engineered “Roundup Ready” seeds back around 1995. Initially hailed as a breakthrough that would save time and energy by controlling weeds, it was not long before those weeds began developing resistance to the product. This, in turn, has led to farmers increasing the amount of glyphosate they apply to their fields – which has caused even greater resistance. Today, at least twenty-four different species of weed are now resistant to glysophate.

Monsanto’s solution is to escalate the situation by developing even stronger herbicides and encouraging farmers to use a variety of formulations in greater amounts. The company is also busy engineering seeds that are resistant not only to glyphosate, but other pesticides, such as dicamba. However, this raises serious concerns that such practices will only fuel the process.

The reintroduction of older herbicides such as dicamba also have serious implications for human and environmental health. Dicamba and 2.4-D are known as phenoxyl herbicides, and are known to increase the risk of diseases such as non-Hodgkin’s lymphoma among farmers and agricultural workers who are exposed. As if that was not bad enough, these herbicides are likely to drift into neighboring fields, where they can have devastating effects on the most common broadleaf fruit and vegetable crops.

The UCS recommends that by using eco-friendly practices such as crop rotation, companion planting, cover crops and the use of fertilizer produced from naturally-composted vegetable waste and livestock manure, farmers could reduce their dependence on synthetic, potentially toxic herbicides by up to 90% while maintaining current yields. These are practices already in place among organic farmers. The UCS is calling on Congress and the Department of Agriculture to provide greater support for organic farming – but with an environmentally-hostile Administration in Washington D.C. and many legislators in Monsanto’s back pocket, such measures will have to be taken at the state level.