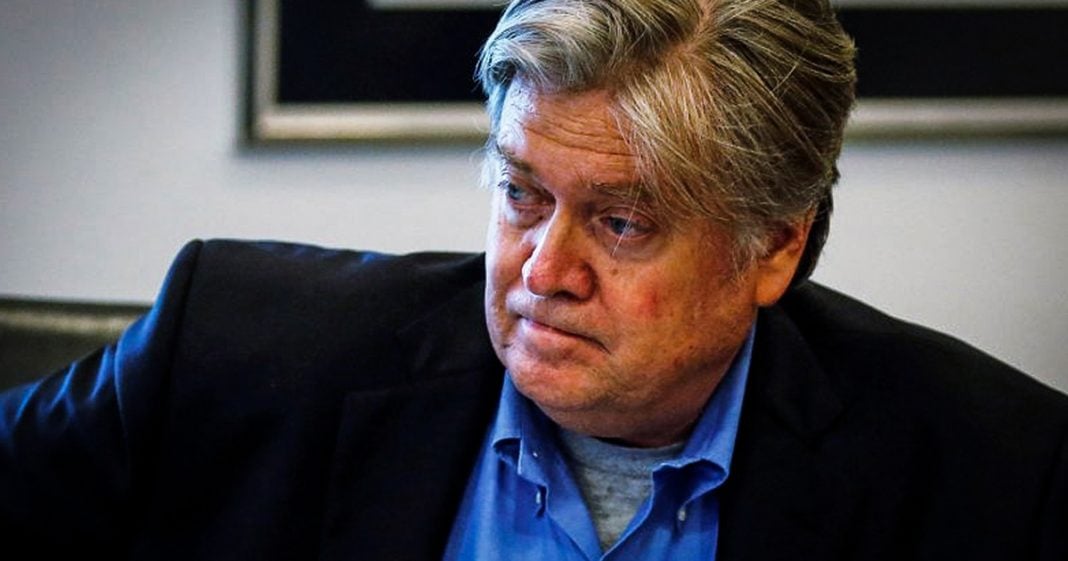 Steve Bannon, former chairman of Breitbart and Trump’s chief strategist, wants the media to just shut up already. And now we’ve hit the second tenet of fascism from the Trump administration in just one week. Ring of Fire’s Farron Cousins discusses this.

Why Is A White Nationalist Writing Trump’s Executive Orders?

In an interview with the New York Times earlier this week, Steve Bannon, Donald Trump’s chief strategist, told the news outlet that the media needs to just keep their mouths shut with regards to anything the Trump administration does. According to Steve Bannon, who, remember, was the chairman of Breitbart news, if you can actually call it news, said that the media for the Trump administration is the opposition party. A group that we need to fight back against.

If any of that sounds familiar, it’s because you’ve probably read the tenants of fascism in the past, and this is exactly out of that playbook. Fighting the media, deligitimizing the media, controlling the media, as Donald Trump has done with who’s allowed to come to White House press briefings and whatnot, that is a tenant of fascism. So far, it’s at least the second one we’ve seen in Donald Trump’s first week in office. The first was silencing federal employees from speaking to the public.

We really are headed towards full blown fascism. We’ve only been at this a week. I’m tired of hearing people say, “We should give him a chance, he did good on TPP.” Who cares? When you look at all of the damage he has done in one week, compared to that one tiny little good thing that a democrat would’ve also done, there’s no comparison. Donald Trump is not a good guy, he is not a guy that deserves the benefit of the doubt. He is not a guy that deserves the benefit of time. He has screwed up too many times already in this first week in office, and now, Steven Bannon tells us that they’re going to fight back against the media?

To that, I say anyone in the media, you just need to get louder. You need to cover Trump and his administration more. Do not let them silence you, because if you do, then they win. When they win, the public loses. The corporate media has been in the garbage can for about 20 years or more now. More concerned with making profits than they are with educating the public. There are still plenty of independent news organizations that don’t even depend on advertisers to stay alive, that are reporting the truth. The good, the bad, the ugly, and everything in between.

Those are the outlets that the Trump administration wants to fight. Of course, they want to go after the big dogs, Washington Post, New York Times, organizations that do routinely have to issue retractions. They want to fight back against the televised media, CNN, MSNBC. Yeah, they’ve got their pro corporate slance, but occasionally, a nugget of truth slips out from one of those organizations.

That’s what the Trump administration wants to prevent. They want to keep the public stupid, because stupid people vote for Donald Trump. That’s what they need. They need us to not be intelligent. They need us to not be informed, because the second we start learning what they’re doing, what kind of damage they’re causing to this country, they know that we as a public are going to stand up and remove them from office.