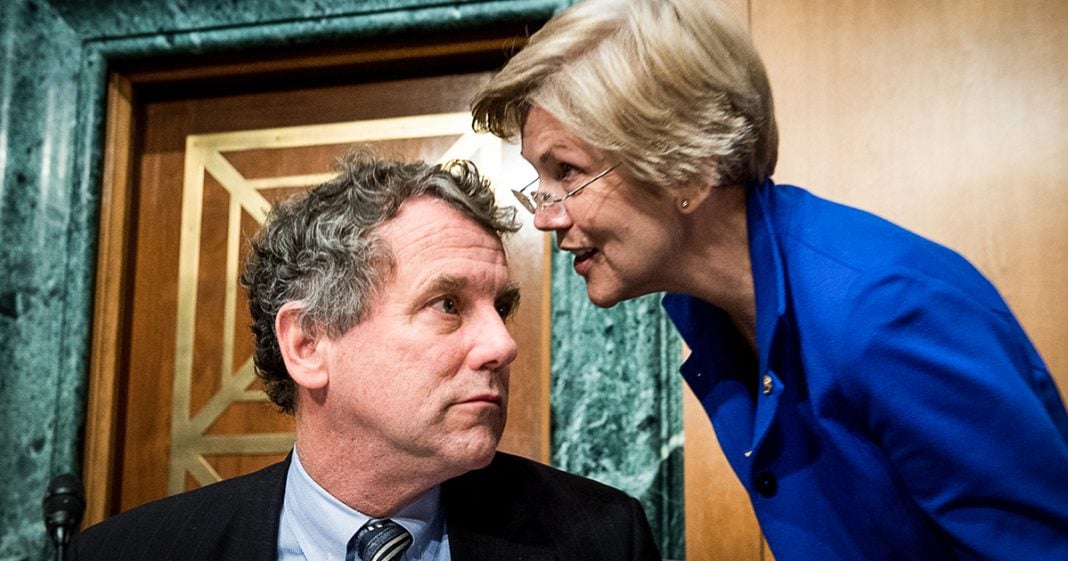 This week we saw prominent Democrats Sherrod Brown and Elizabeth Warren decide to vote in favor of Ben Carson as the Secretary of Housing and Urban Development.  Additionally, Democratic strategists are telling us that Democrats need to pick their battles against Trump so they don’t appear to be completely obstructive during the Trump years.  Have they not been paying attention to what’s happened in this country in the last 8 years? Ring of Fire’s Farron Cousins discusses this.

David Brock, Get the Hell Away from My Party

A lot of progressives were upset earlier this week when Democratic Senator Sherrod Brown and Elizabeth Warren voted in favor of Ben Carson becoming the Secretary of the Department of Housing and Urban Development. Now, according to Senator Brown’s office, he had a private meeting with Ben Carson where they realized that they’re actually on the same page on a lot of issues including LGBT issues, which Brown’s office says that Carson wants to make sure there’s no discrimination in the housing process towards LGBT community. However, keep in mind this is also a guy that says going to prison makes you gay, so I wouldn’t trust a single thing that this man says about LGBTQ issues.

Do you think the public was pissed off at them? Do you? Because they won the 2012 House races. They won the 2014 mid-terms, and they won the 2016 election, House, Senate, everything, by campaigning on that obstruction and telling their base, “We didn’t let the people that you don’t agree with run this country into a hole.” That was their talking point, even though it’s not anywhere based in reality. President Obama was not going to run the country in a hole. The Democrats were not going to do that. That’s what they used, and that’s how they won.

You people are so stupid to sit there and think that the Democrats can’t pull off the same thing. How detached from reality have you become? Democratic advisors, Democratic strategists, and even progressive heroes like Sherrod Brown and Elizabeth Warren, you’re dead wrong on this issue and history proves it. History proves it. Look at the last three elections and you will see that you are wrong.

Republicans used images of other Republicans with President Obama shaking his hand. They used that in primaries against their opponents and won. Is that what strong progressive Democrats need to do with these other Democrats with Donald Trump? If we see you talking to him, should we take a picture and use it against you in a primary campaign to get you out of office? It worked for the Republicans. It should work for the Democrats. Maybe that’s what we have to do to get you people to wake up.

Very few people in this country support Donald Trump’s agenda. That includes people who voted for Donald Trump. They’ve already come out and said that they don’t support this. For you to come out on national TV, people like Carville, and David Brock who wants to take over the Democratic Party, for you to come out and say that, “Oh, Democrats are playing it safe. They’re playing it cool. They’re gonna go with ’em on this. They’re gonna go against ’em on this.” That is bull crap. You can go against him on every issue and you’re not going to be punished. I promise you. Because once the public sees exactly what this man is doing, they don’t like it. His poll numbers are still dropping, but you’re supporting him. You’re going with him by letting some things fly. Right? I mean, maybe it’s not a horrible, horrible, thing. Maybe it’s only horrible. It’s not going to cut it anymore.