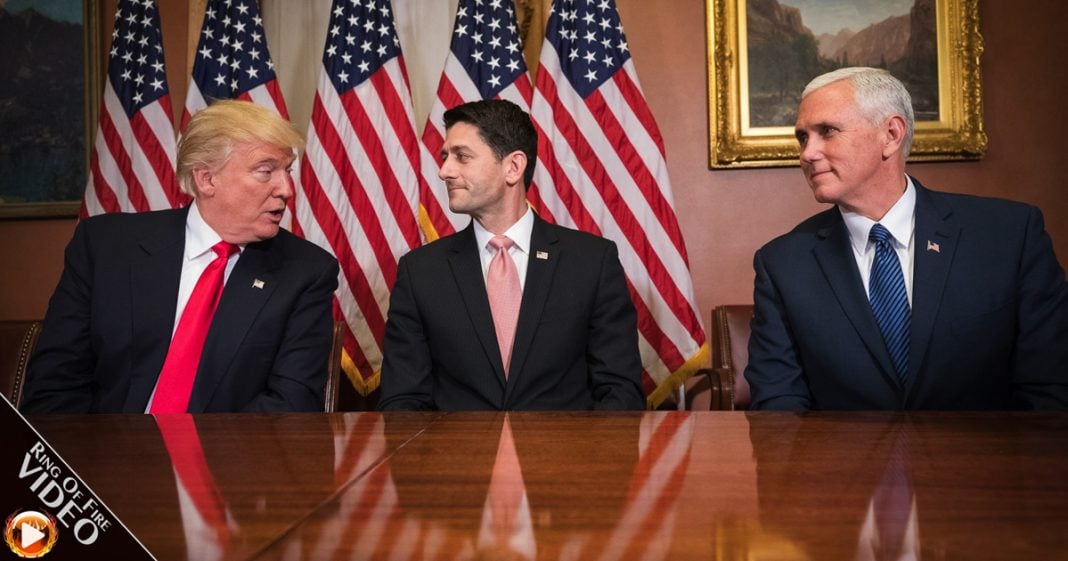 Donald Trump is averaging one executive order per day since being sworn in, and nearly all of them have been a disaster for the public.  His desire to skirt Congress and undermine the country is putting us on a dangerous path that may prove difficult to escape from. Ring of Fire’s Farron Cousins discusses this.

Donald Trump for his entire life has been a man that’s wanted nothing but power, power over other people. Didn’t so much care about being respected. Didn’t necessarily care about being loved up to this point. It was all about the power and now that he is president of the United States, he does essentially have absolute power. What does absolute power do? It corrupts absolutely and that’s what we’ve seen in the few short days since Donald Trump was sworn in as president.

To be honest, this was something that everyone who paid attention during the primaries predicted and they predicted accurately. Donald Trump is averaging at least one executive order every single day since being sworn in, including on inauguration day. Now, one of those did a fairly decent thing, pulling the US out of the TPP, but we’ve also seen executive orders that have gone ahead and given companies the go ahead to construct the Dakota Access pipeline and the Keystone XL pipeline.

These two pipelines combined will create a grand total of maybe 55 jobs in the United States. Donald Trump told us he signed these executive orders because he wants to create jobs. The two pipelines combined, 55 permanent US jobs. You get just as many jobs if you open a McDonald’s in a city. Yeah, they probably don’t pay as much so maybe you open two. This pipeline construction has nothing to do with job creation and it has nothing to do with American energy independence.

We already have enough energy to supply all of our needs. That’s why oil companies last year pushed to repeal the oil export ban that had been in place since the 1970s. We had too much of it. They couldn’t sell it because we weren’t using it. They wanted to sell it overseas and that’s why the Keystone XL pipeline is coming from Canada down to the Gulf Coast to ship it overseas.

This isn’t about energy independence. It’s not about jobs. It’s about corporate greed and the desire to run over people, basically. They want to prove, Donald Trump wants to prove, these corporations want to prove that they’re more powerful than the people. The Standing Rock Protest, the No Dakota Access Pipeline Protest that took place this last year stopped the pipeline and obviously the companies got pissed.

He is circumventing Congress in the exact same way that Republicans accused President Obama of doing even though he actually signed fewer executive orders than his predecessor George W. Bush and he’s doing it because he knows that he’s not going to get the Republicans to go onboard with this. Yeah, these might be projects that the Republicans support, but they can’t support it on paper because if they do, we get to use that against them in their next campaign.

We get to say, “Hey. Remember when you signed on to this piece of legislation that polluted all these people’s lands, that took away sacred burial grounds from tribes that have been here since before the United States was even formed? Remember when you did that?” See, Donald Trump’s taking out the middle man. We don’t have to go through Congress and it actually helps the Republican party that way, but these are issues that are not going to go away and we’re going to see more executive orders because right now Donald Trump is absolutely drunk with power.

Here’s the thing about drunks. They screw up. They make a lot of mistakes, and Congress has the authority, the ability, unfortunately they don’t have the testicular fortitude, to stand up and do something about it.