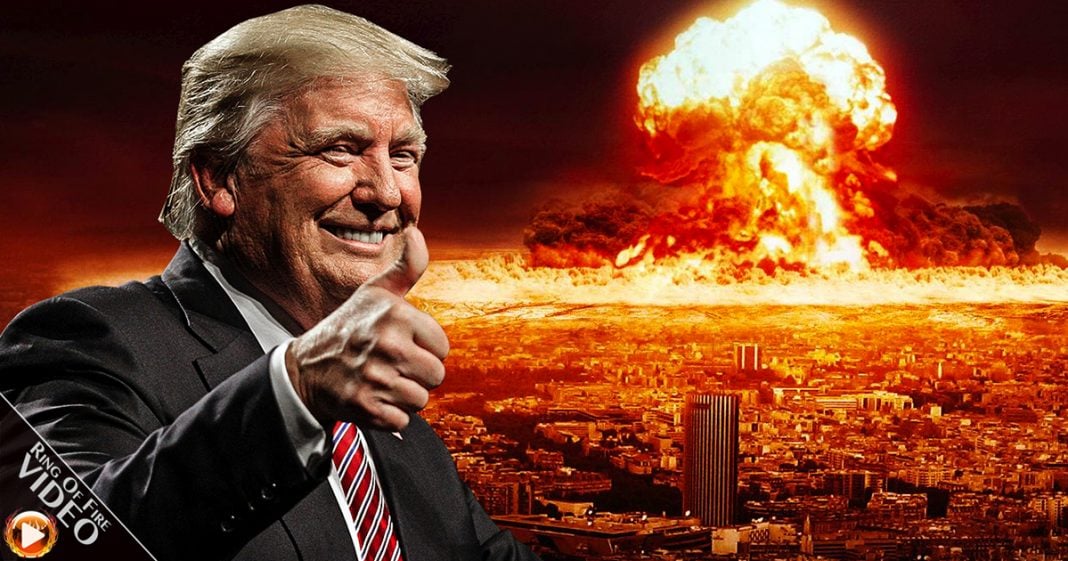 Democrats are rightfully terrified about Donald Trump having the authority to authorize a nuclear strike, so they are working on legislation that will prohibit the president from launching a nuclear first strike without Congress first declaring an act of war. Ring of Fire’s Farron Cousins discusses this.

On January 24th, Senator Ed Markey and Representative Ted Lieu put forth a combined effort legislation called the Restricting First Use of Nuclear Weapons Act of 2016. Lieu introduced it in the House. Markey introduced it in the Senate. What this legislation would do is limit Donald Trump’s ability to fire nuclear weapons, expressly forbidding the President from launching a nuclear strike unless Congress had declared an act of war. This means that if this legislation were to pass and get signed by the President, which it almost certainly will not, it would limit Donald Trump. He couldn’t just fly off the handle one day, as he’s prone to do, and decide to launch a nuclear strike against North Korea, or decide to send a nuke over to Iran.

This legislation would prevent him from being able to do that because right now Donald Trump could. That’s the scary part. That’s something a lot of people really don’t take into consideration right now. Donald Trump, if he felt like it, could order a nuclear strike on Mexico right now without congressional approval, without the United States public having a say in it. He could just do it. Yes, every president since the advent of nuclear weapons has had that same authority, but we’ve never really had intense reason to worry about that happening until now.

Even dumb, old George W. Bush starting his wars of aggression in the Middle East, we still never really had to worry about him sending a nuclear weapon over there because at least he had advisors who, even though they were completely war hungry, understood what that would mean. They helped to keep him in check. Donald Trump doesn’t have that. Donald Trump has a bunch of billionaire, corporatist idiots advising him, looking over his shoulder, looking out for him. People just like him. People too gutless to stand up to him if he ever came up with a brain dead idea of sending a nuclear weapon overseas.

That’s why this legislation is so important. It may not get passed. It, unfortunately, probably would not get passed because it would have to be signed by the President. If he didn’t, you’d have to get the majorities to override the veto, which would be almost impossible given the Republican control of both chambers, but it’s bringing the issue to light. That’s something we have to understand right now. As horrible as Donald Trump has already been, things could and likely will get worse. Congress needs to do everything within their power to reign in his power before he completely destroys not just the United States, but any other country in the world, friend or foe. Nobody deserves to be obliterated, and that’s what we have to be concerned about right now.