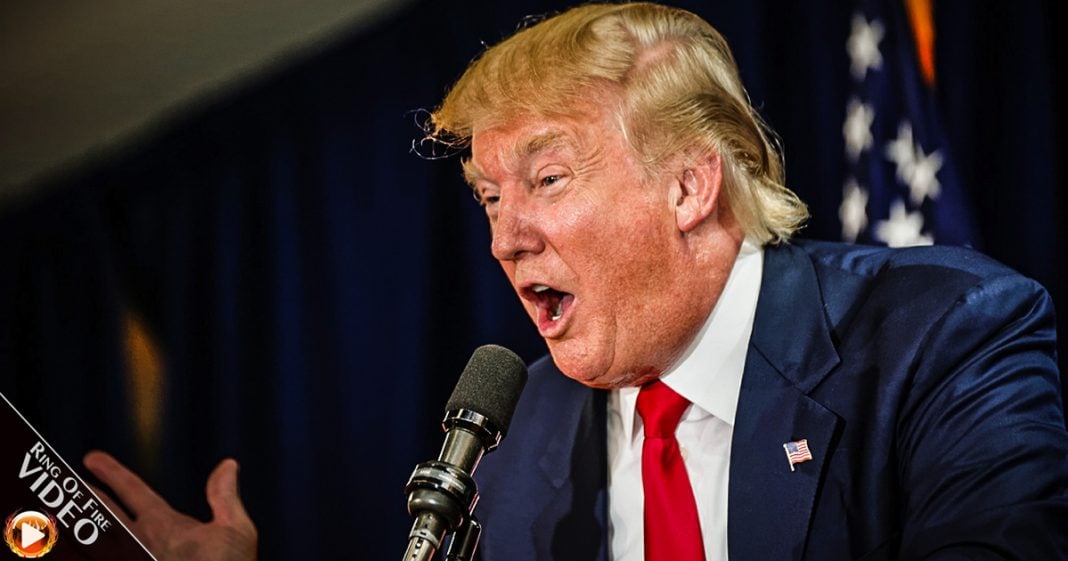 Donald Trump is still bitter about losing the popular vote, so he’s doubling down on his claims that millions of illegal immigrants went to the polls and cast a vote for Hillary Clinton, thereby costing Trump the popular vote.  This claim has no basis in reality, but that hasn’t stopped Trump from repeating it over and over again. Ring of Fire’s Farron Cousins discusses this.

Donald Trump is still pissed off that he lost the popular vote by almost three million votes, so once again yesterday, during a closed door meeting with lawmakers on the hill, Donald Trump told the crowd that he would have won the popular vote as well as the electoral vote had it not been for three to five million illegal immigrants coming into the United States and casting a vote for Hillary Clinton.

Several things about this statement. First of all, not the first time Donald Trump has said it. It’s not the last time he’s going to say it. Second, there is no evidence whatsoever to support any claim that millions of illegal immigrants casted votes for Hillary Clinton. There is not any evidence to suggest that two illegal immigrants cast votes for Hillary Clinton, or one. So far, the only counts of voter fraud that have taken place from the 2016 election were votes for Donald Trump, so any voter fraud that we have evidence of, that we have inclinations of, all actually surrounds Donald Trump, not Hillary Clinton.

On top of that, he knows that his approval numbers are actually still falling. People just don’t like the guy, and so he decides to feed his frail, fragile male ego, to go in front of lawmakers, in front of the country, and lie, something that he knows is a lie. We know it’s a lie because we can verify it based on all the accounts of voter fraud that we’ve seen, which is less than five, but he’s still out there saying it, because he needs to believe it to keep his little, fragile ego alive.

The other reason that he’s doing this is because he understands that he is already facing a very tumultuous re-election battle in four years. Republicans across the board are probably going to be in trouble in 2018 midterms and the 2020 election. How do we tighten voting restrictions without anybody really noticing? We make up fabricated claims of voter fraud. We say that maybe five million illegal aliens voted in the election so then we can tighten those racist laws just a little bit more, keep more minorities away from the polls.

That’s what this is about, Donald’s fragile little ego and the desire of the Republican Party to keep any person of color from showing up to the polls in 2018 and 2020.