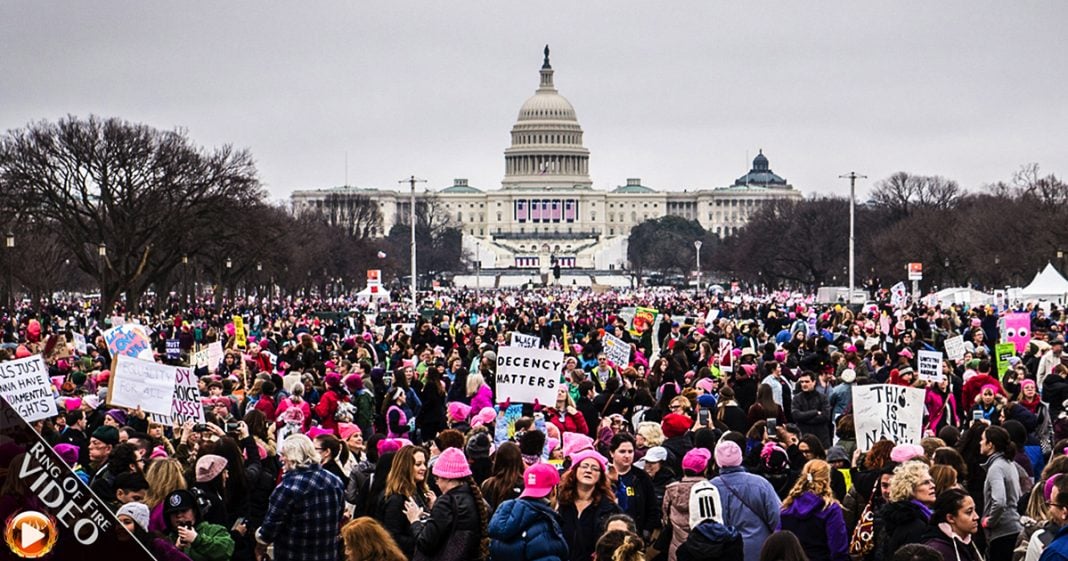 On Saturday, concerned citizens across the country took to the streets to demonstrate against the sexism that had been a hallmark of the Donald Trump campaign.  Led by women, these protests marked the single largest day of protest in United States history, and they should serve as a warning to Trump that his anti-female attitude will not be tolerated. Ring of Fire’s Farron Cousins discusses this.

On Saturday, the day after Donald Trump’s inauguration, millions of women and men across this country took to the streets not necessarily to protest Donald Trump himself, but to protest his sexist policies, his sexist rantings, and to show that women are not going to sit silently as their rights across the country are taken away from them.

This was, according to numbers, the largest national day of protest in the history of the United States. It was an event created by women. It was an event put forth by women. They got together, essentially, as a country and said, ‘We are tired of this. We’re tired of being treated like second-class citizens. We’re tired of white males telling us what we can or cannot do with our body. We’re tired of white males trying to take away our healthcare,” because that’s what’s happening right now, not just in Washington, D.C., but in states across the country. Millions got together on one day and said, ‘Enough. We’re fighting back. We’re standing up to you. We outnumber you.’

From this Women’s March Movement, another movement has already emerged. It’s called Run For Something. Their goal is to get these women that are now politically active to continue the activism and run for local offices. The way they say it, ‘If Donald Trump, this idiot, can win president, then you can certainly win a seat on your city council. You could win a state representative seat. All you have to do is stay active and keep fighting.’

That is the message that these women brought forth on Saturday, ‘We’re not sitting down. We’re not sulking. We’re not whining about this. We’re standing up and showing that we’re going to be active and we’re going to hold you accountable.’

Hopefully, the Run For Something movement does pick this up and runs with it, because these women across the country need to be heard. They need to be in office. They need to be in positions of tremendous power where they can really make change and tell the white men that are trying to take their rights away, ‘Not going to happen anymore.’