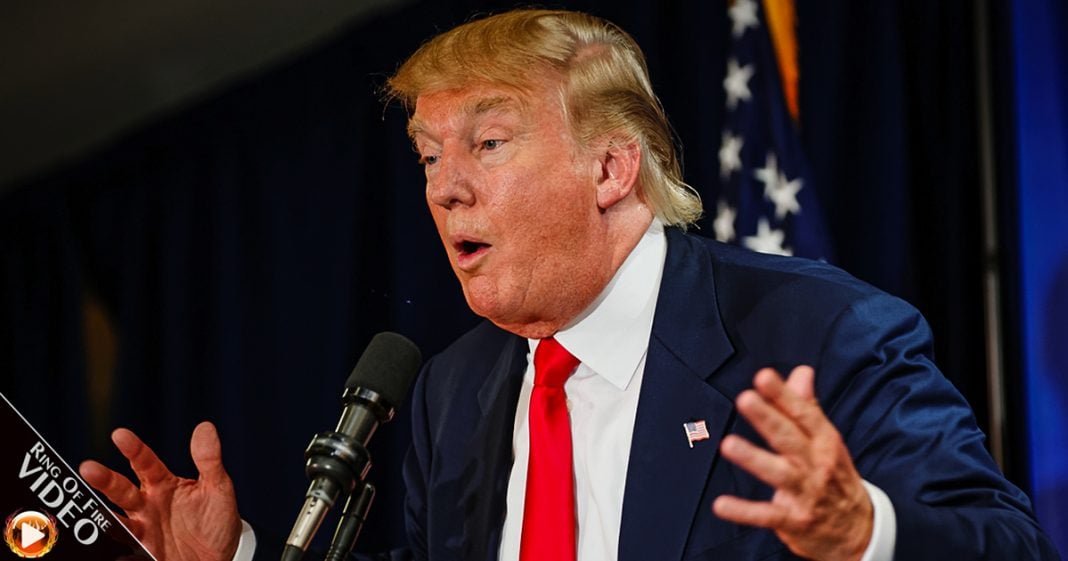 Legal scholars are preparing a lawsuit against Donald Trump over foreign payments that he’s received from his businesses, a direct violation of the US Constitution.  Additionally, Trump still hasn’t divested from his businesses, creating an enormous, and illegal, conflict of interest for the man who hasn’t even been president for a full week yet. Ring of Fire’s Farron Cousins discusses this.

We’re currently less than a week into the actual Donald Trump administration and already, Monday morning, lawsuit gets piled against Donald Trump by the Citizens for Responsibility and Ethics in Washington, saying that his receipt of foreign payments for his hotel is in violation of the emoluments clause, a direct violation obviously of the constitution.

The reason that this is an issue is because as ProPublica has reported, Donald Trump did not divest his interest in his own companies. He did not put anything into a blind trust, he did not turn over leadership. He is still very much aware of and involved and receiving the money from his own corporate operations. That is illegal for a sitting president of the United States.

There’s not such thing as, “Oh, he didn’t have time yet,” or, “He’s working on it.” He’s had more than 18 months to do this, or at least lay out the plan so that he could put it into action before he was inaugurated, because as I’ve said in the past, the second he gets inaugurated, if he hasn’t done it yet he is in violation of the constitution and that is what this lawsuit from CREW is trying to say, but even if this lawsuit from CREW does not get accepted by the court, if they say that they have no standing, the ACLU already has a backup plan because as Trump is still an owner in his DC hotel, which hosts foreign dignitaries who pay their bills with foreign government money and that money then goes to Donald Trump, that’s how that works.

If the CREW lawsuit fails the ACLU plans on finding another local hotel or bed and breakfast that’s losing business to Trump’s hotel based on Donald Trump being the president and they will bring the suit that way. There is nothing that Trump can do right now aside from divesting from his own businesses today to get out of these lawsuits. These people have been thinking about this for months because Donald Trump has not kept his promise to divest from his own businesses. That’s all their wanting, they’re not essentially trying to impeach him right now, although if these lawsuits go forward it will lead to impeachment. The government will have no choice but to act on the matter.

Donald Trump is in this mess because he refused to do what he was legally required to do. He refused to take a step back from his own companies in order to run the country. That’s what the people elected him to do. I take that back, that’s what the electoral college elected him to do, the people overwhelmingly voted for Hilary Clinton. Nonetheless Donald Trump is in a very sticky situation today and it’s all because of either his laziness or his arrogance and thinking that he could get away with doing something that every president before him had made sure that they took care of before they were sworn into office.