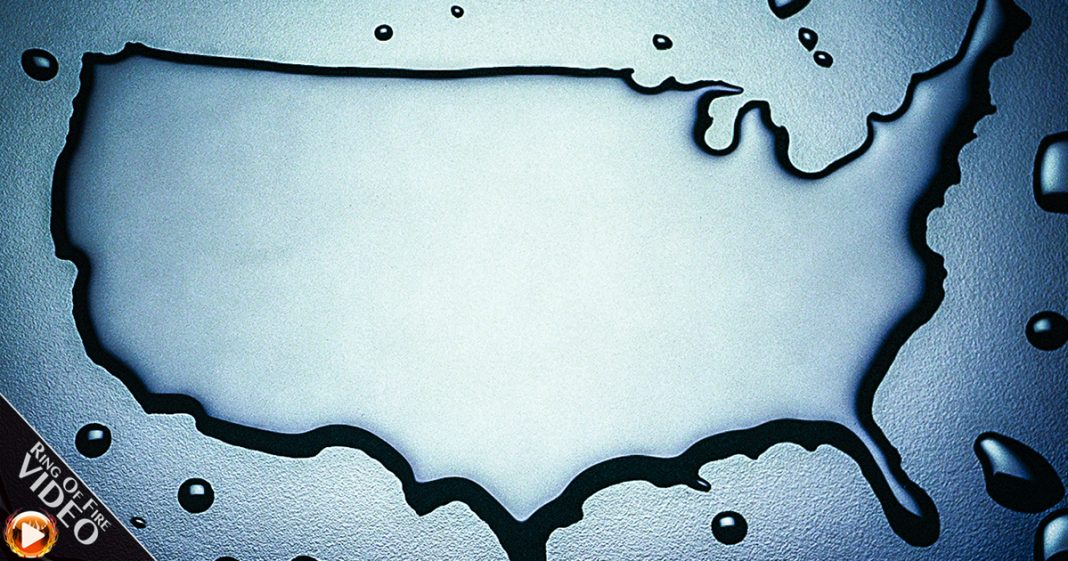 A new study by Michigan State University shows that, if things remain constant, we’re only 5 years away from 10% of the population being completely priced out of the water system and unable to afford water service.  And no one seems to be paying attention. Ring of Fire’s Farron Cousins discusses this.

They’re not testing for pharmaceutical residue, all things which do make their way into the water supply and have adverse health effects on the human population. Again, small part of the picture there, is the water contamination. According to a new report from Michigan State University, in less than five years we will be praying to have the opportunity to drink this dirty water. This new MSU report shows that because of the increasing water rates around the country and stagnant incomes across the country. Within five years more than 35,000,000 Americans will be completely priced out of the water system. That means in less than five years, more than 35,000,000 American citizens will no longer be able to afford water service in their home. Will not be able to afford water. 10% of the United States’ population won’t be able to afford water. Now I repeat that several times because that should be the biggest headline in this country right now. Not Donald Trump getting inaugurated. Not Donald Trump tweeting something. Not democrats still fighting with each other. Not Bernie Sanders doing something.

By the end of Trump’s administration we could be looking at 10% of the population in the United States that can’t get water. The basic building block of all life on this planet. You know, if this was a story coming out of a third world country, we wouldn’t be surprised. This is America. We’re suppose to be the richest, wealthiest, most powerful nation in the world and we’re only a few years away from 90% of our population getting all the water and 10% dehydrating. Here’s the other problem with it. Resource scarcity breeds conflict. It’s happened all over the globe since the very first days of human existence. Resource scarcity breeds conflict. When one group has something that another group needs but doesn’t have, they will take it. Now they can do it diplomatically if one group is willing to. If not, they take it by force. That is a very real possibility within the next five years. The reason for this scarcity again, according to the MSU report water rates continue to rise.

They’re going to rise even further if privatization plans in the United States continue to go through where cities are beginning to privatize their water supplies. Prices go through the roof at that point, sometimes doubling or tripling. On top of that we’re wasting trillions of gallons of water every year due to ruptured pipes within our aging water infrastructure system. On top of that we have all of the droughts and water contamination brought to us by climate change making clean water even more scarce, raising rates because there’s more demand than there is supply. Basic economics there. 10% of the US population will be priced out of the water system within the next five years. If things stay constant. We could change this, but considering the new make up of the White House, the House of Representatives and the US Senate and state governments across the country now being controlled by republicans at an alarming rate. There will be no change. Get ready. Start bottling it up, because if this MSU report is accurate, we’re less than five years away from a major water crisis in the United States. The worst part is, nobody’s talking about it.