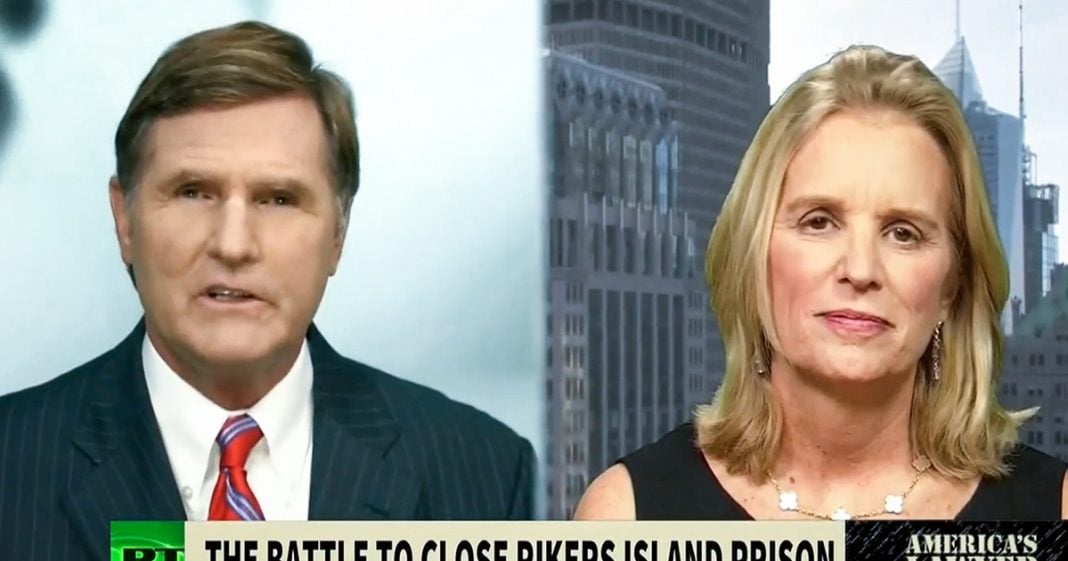 Hardly a week goes by without another horrific story coming out of Rikers Island Prison in New York City. The notorious prison is just miles from downtown Manhattan. It’s been home to countless cases of prisoner abuse, ranging from beating and neglect of inmates to prisoners actually dying in their cells from overheating. There’s now a campaign to pressure New York Mayor Bill de Blasio to close the prison for good. One of the members of that effort is Kerry Kennedy, President of the Robert F. Kennedy Human Rights Center and daughter of late Robert F. Kennedy. In this segment from America’s Lawyer, she discusses this with host Mike Papantonio.

Kerry Kennedy: I’ve been working on international human rights issues for the last 35 years, and we are constantly getting people out of prison all around the world because they were illegally imprisoned based on their race, creed, color, national origin or political belief, but you don’t need a passport to work on human rights. Right here in New York City, Rikers Island is one of the most abusive, horrific places that I’ve ever heard of anywhere on earth. It’s just extraordinary. We have a criminal justice system in our country which targets people of color, targets people because they’re poor. It increases criminal records. It churns out recidivism rates. It targets individuals and families and communities into a cycle of poverty and re-incarceration. That’s all happening right here in New York.

Mike Papantonio: Kerry, people that aren’t aware of this story aren’t familiar with exactly how bad those abuses are. If you were to try to give us examples of what type of abuses that you’re fighting to correct … Comparatively, as I say, I don’t think there’s anybody more effective than you in dealing with human rights all over the globe, so for this to get your attention, all I’m thinking is it’s got to be bad. How do you describe the worst part of that if you were to describe it?

Kerry Kennedy: The physical abuse is endemic. People will be put, who are awaiting trial … 85% of the 11,000 people in Rikers Island have only been accused of a crime. They’re awaiting trial. They’re innocent until proven guilty. They can be put into solitary confinement before trial for up to two years. Imagine that. Let me just give you one statistic, and I think this tells it all. In a 2015 survey of transgender people, 100% of them reported being raped at Rikers Island. 100% reported rape at Rikers. This is unacceptable. This is a government facility. It’s run by our government. This is a massive, massive human rights abuse, and we need to put an end to it.

Mike Papantonio: Kerry, they were actually talking about trying to refurbish the place and expand the place and somehow make it better. As I follow your discussion and your narrative on this, there is no making this better. It’s just time to close it down and start somewhere else. Did I get that right?

Kerry Kennedy: Yeah, that’s absolutely right. There have been efforts, years and years of efforts and reform and plans, and just none of them work. This place is too far gone. It really needs to be shut. There’s no reason to keep it open. Let me just step back for a moment, Pap, and talk about what happens in New York City. If you’re accused of a crime, let’s say jumping a turnstile, or shoplifting perhaps, you’re brought before a judge. Then the judge says, “You have a choice. Either you make cash bail, and if you make the cash bail we’ll release you.” 90% of the people who make that cash bail are never convicted of a crime. If you cannot afford that cash bail … It might be up to $1,000. We have 15,000 people last year who could not afford the $1,000 in cash bail, and they were sent to Rikers and places like it.

You have a job at McDonald’s. If you don’t show up, you’re going to get fired. You’ve got a 16-year-old who’s alone at home in public housing. A lawyer comes to you and says, “All you have to do is plead guilty and you can get out of Rikers today,” so you plead. Now you get out and you go back to McDonald’s and they say, “Well, you didn’t show up for work yesterday, so you’ve been fired, and now you have a criminal record so we can’t hire you.” Then you go to public housing and you can get your 16-year-old back, but because you not have a criminal record you’re no longer allowed in public housing. You’re homeless, you’re jobless, you can’t get a loan, and you’re lost. This is crazy.

Mike Papantonio: At the time, it sounds like a good idea because you’re there under incredible, awful situation, terrible place to be, and so you say, “Yeah, I’ll take the deal,” which most people would do. Let me ask you this. What do you think will be the biggest obstacles to reducing the prison population and the general criminal justice reform under the upcoming Trump administration? Don’t we have to look at this? There was some momentum moving that way. Do you think that that could have an impact on what’s going to happen up there in Rikers at all?

Mike Papantonio: I just thought maybe there would be some impact in his philosophy in general. Kerry, listen, good work, as usual. I don’t know there’s anybody that I could name anywhere that does more good work as far as human rights all over this globe. Thanks for paying attention to Rikers right here in the United States. Thanks for joining me.